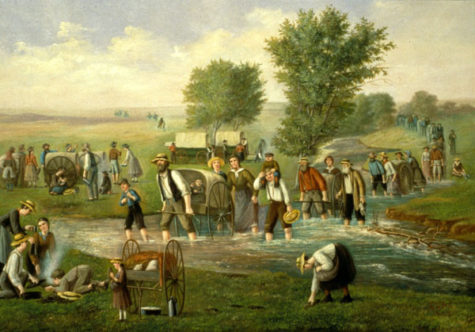 July 24,  Pioneer Day commemorates the day in 1847 when Brigham Young led his “pioneer band” of Mormons into the Salt Lake valley to establish a settlement–their new Zion. The Mormons had been driven from New York, Ohio, Missouri, and Illinois and had spent four difficult months traveling 1,073 miles overland to reach the Great Basin, chosen by Young because of its remoteness.

It was the most organized and disciplined westward migration in American history, and unlike most emigrants intent on their destination, the Mormon pioneers were equally concerned with improving the trail for those who would follow.

Pioneer Day is celebrated as the second most important date in the Mormon calendar, behind April 6, the day Joseph Smith established the church. Parades, fireworks, rodeos, and other festivities help commemorate the event.

Promote Your Page Too
Bread Crumbs
A trail of bread crumbs in case you lose your way wandering through this site ... Pagan Calendar > Blog Page > July > Pioneer Day