Nyepi Day in Bali is a New Year celebration unlike anywhere else on the planet. Unlike other cultures that celebrate New Year with vivacious and loud festivities, the pinnacle of Balinese New Year is a day of complete Silence. Hence the name Nyepi, meaning “to keep silent” in the local language, which falls on the day following the dark moon of the spring equinox.

It’s ultimately the quietest day of the year, when all of the island’s inhabitants abide by a set of local rules. These bring all routine activities to a complete halt. Roads all over Bali are void of any traffic and nobody steps outside of their home premises.

Nyepi is a day fully dedicated to connect oneself more closely with God (Hyang Widi Wasa) through prayers and at the same time as a day of self-introspection to decide on values, such as humanity, love, patience, kindness, and others, that should be kept forever.

The unique day of silence marks the turn of the Saka calendar of western Indian origin. It’s one among the many calendars assimilated by Indonesia’s diverse cultures. The Saka is also among two calendars that are jointly used in Bali. The Saka is 78 years behind the Gregorian calendar, and follows a lunar sequence. Nyepi follows after a new moon, and the dates vary from year to year. 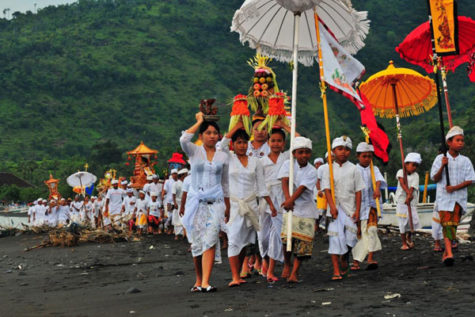 Before the Silence Before ‘the silence’, highlight rituals essentially start three days prior to Nyepi, with colourful processions known as the Melasti pilgrimages. Pilgrims from various village temples all over Bali convey heirlooms on long walks towards the coastlines where elaborate purification ceremonies take place. It is one of the best times to capture on camera the iconic Balinese processions in motion, as parasols, banners and small effigies offer a cultural spectacle.

Village meeting halls known as ‘banjar’ and streets feature papier-mâché effigies called ogoh-ogoh. They are built throughout the weeks leading up to the Saka New Year. Youth groups design and build their mythical figures with intricately shaped and tied bamboo framework before many layers of artwork. These artistic creations are offshoots of the celebration. Much of it has stayed on to become an inseparable element in the island-wide celebration that’s Nyepi Eve.

Then on Saka New Year’s Eve, it is all blaring noise and merriment. Every Balinese household starts the evening with blessings at the family temple and continues with a ritual called the pengrupukan where each member participates in ‘chasing away’ malevolent forces, known as bhuta kala, from their compounds – hitting pots and pans or any other loud instruments along with a fiery bamboo torch. These ‘spirits’ are later manifested as the ogoh-ogoh to be paraded in the streets. As the street parades ensue, bamboo cannons and occasional firecrackers fill the air with flames and smoke. The Nyepi Eve parade usually starts at around 19:00 local time. 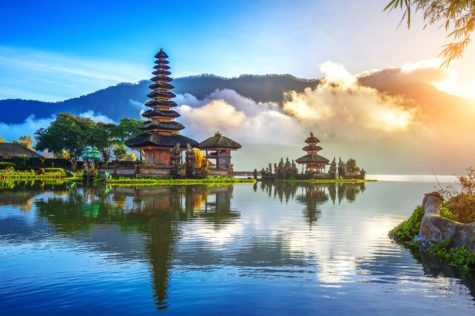 However on Nyepi Day, complete calm enshrouds the island. The Balinese Hindus follow a ritual called the Catur Brata Penyepian, roughly the ‘Four Nyepi Prohibitions’. These include:

Some consider it a time for total relaxation and contemplation, for others, a chance for Mother Nature to ‘reboot’ herself after a year of human pestering. No lights are turned on at night – total darkness and seclusion goes along with this new moon island-wide, from 06:00 to 06:00. No motor vehicles whatsoever are allowed on the streets, except ambulances and police patrols and emergencies. Traditional community watch patrols or pecalang enforce the rules of Nyepi, patrolling the streets by day and night in shifts.

Promote Your Page Too
Bread Crumbs
A trail of bread crumbs in case you lose your way wandering through this site ... Pagan Calendar > Blog Page > Asian Celebrations > Nyepi Day