And frosts are slain and flowers begotten,
And in green underworld and cover
blossom by blossom the spring begins.
~Algernon Charles Swinburne 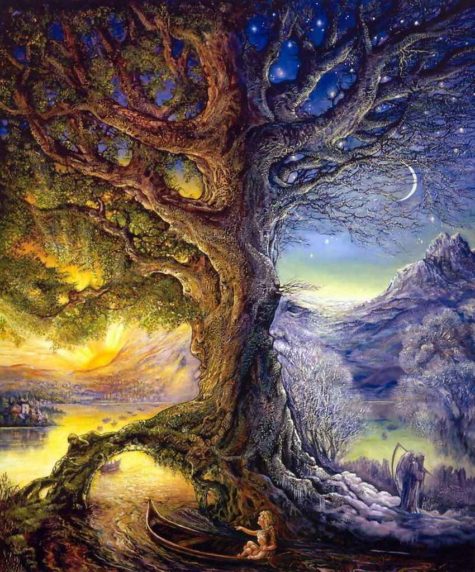 Méan Earraigh marks the spring equinox, when night and day are of equal length and spring officially begins. Birds begin their nesting and egg-laying, and eggs–symbolic of rebirth, fertility, and immortality–are tossed into fresh furrows or eaten by ploughmen. They are also carried by those engaged in spring planting.

A charming custom is painting eggs with symbols and pictures of what one wishes to manifest in the coming year. The eggs can then be buried in the Earth Mother, who hears the cries and dreams of her children. In some communities, eggs are hidden in the stores of seed grain and left there all season to bless the sowing and encourage the seeds to sprout. Dressed as mummers, “pace-eggers” go from house to house and demand eggs and coins in return for a short performance. Men and women exchange clothing for the show.

The eggs given to the pace-eggers have been wrapped in leaves, roots, flowers, and bark before boiling, to impart color. Later the eggs are used in games, such as attempting to strike an opponent’s legs. The eggs might be hidden or rolled down hillsides, after which they are eaten. Blood, ashes from sacred fires, fistfuls of salt, or handfuls of soil from a high mountaintop are scattered on the newly sown fields.

Offerings of food and milk are left for the faeries and other spirits who live in and around rocks and are responsible for the fertility of the land. A few fruits from the previous year’s harvest are left for the nature spirits. Sacred hilltops are visited, and picnics of figs, fig cakes, cider and ale are enjoyed. The figs are symbolic of fertility, the leaf being the male element and the fruit the female.

You can also celebrate the arrival of spring with flowers. Bring them into your own home and give them to others. You do not have to spend a lot of money – one or two blooms given for no other reason than ‘spring is here’ can often bring a smile to even the most gloomy face.

A traditional Vernal Equinox pastime is to go to a field and randomly collect wildflowers (thank the flowers for their sacrifice before picking them). Or, buy some from a florist, taking one or two of those that appeal to you. Then bring them home and divine their Magickal meanings by the use of books, your own intuition, a pendulum, this post on the Magickal Meanings of Flowers, or by other means. The flowers you’ve chosen reveal your inner thoughts and emotions.

In the druidic tradition, Aengus Og is the male deity of the occasion. Son of In Dagda and Boand, he was conceived and born while Elcmar, Boand’s husband, was under enchantment. When three days old, Aengus was removed to be fostered by Midir, god of the Otherworld mound at Bri Leith, with his three hostile cranes. These birds guarded the mound and prevented the approach of travelers, and were said to cause even warriors to turn and flee.

Make an Altar to Ostara. 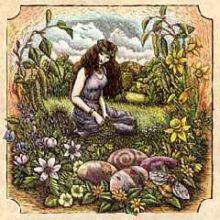 Ostara, the ancient German Virgin Goddess of Spring, loves bright colors. The light pastels of spring are perfect offerings for Ostara. To represent earth on your altar, choose bright or pastel colored stones like Rose Quartz, Amethyst, or any of the Calcites (blue, red, yellow, or green). If you have some Citrine, be sure to include it. Citrine has long been an aid for mental clarity.

By including an offering of colored eggs on your altar, you will be taking part in an ancient tradition (still performed!) by the Germanic people. Ostara has been honored this time of year with painted eggs for centuries.

To symbolize fertility, in addition to the eggs, you can include seeds or rice on your altar. I like to use rice as a symbol for fertility on my altars.

Incense and feathers are perfect symbols for air on your altar. It is important for Ostara’s altar that you include a symbol for air because Ostara herself is the living symbol for Air. (This must be the way Ostara and Easter became associated with birds, i.e. chickens) Be sure to burn incense at your altar when you are dedicating it to bring in the energy and vibrational qualities of Ostara.

You can include anything you like on your altar to Ostara. You will know by how you feel if an item is appropriate or not. I believe it is important to include symbols for the four elements on my altars. The four elements are Fire, Earth, Air, and Water. The four Calcites on my altar (red/fire, green/earth, yellow/air, and blue/water) represent Mother Earth and the four elements. I have added feathers and other items that symbolize Ostara to my altar as offerings to her.

Last, but not least, it might be nice to include a figure of a rabbit. The rabbit is Ostara’s power animal. I am sure this is because of their propensity for fertility.

Promote Your Page Too
Bread Crumbs
A trail of bread crumbs in case you lose your way wandering through this site ... Pagan Calendar > Blog Page > March > Méan Earraigh – Vernal Equinox