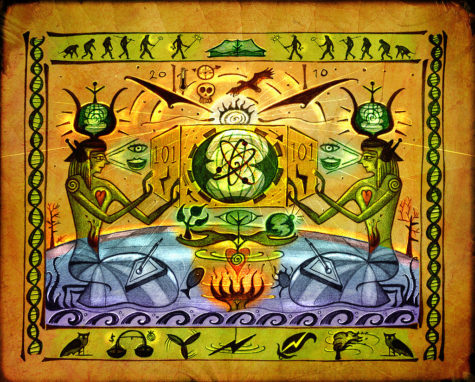 The great and supreme powers of ancient Egypt were the Gods and Goddesses of nature. The coming of the annual flood, the blossoming of the lotus, the rising of the brightest star in the sky, the disappearance of the moon, the eclipsing of the sun, the cutting of the wheat – all were occasions in which the Divine manifested on earth.

The religious life of the ancient Egyptians was marked by the celebration of the following kinds of sacred events:

In all probablity these seasonal festivals were determined by astronomical markers, such as the equinoxes, the solstices, and the rise of particular stars and constellations.

These were sacred events to which the Great Gods and Goddesses provided their blessings, for they were the manifestations of the cosmic cycle of nature. The will of the Gods was made known through the great pattern laid out in the sky by celestial phenomena.

There earliest festivals were those celebrating the mysteries of the Goddess in her appearance as the day and night sky, as both sun and moon. Most of the original ancient Egyptian feast days were celebrated at the new or the full moon. The ancient hieroglyph for “month” was the image of the moon itself. Apparently, the original festival calendar was lunar.

Of course, many Egyptian feast days are moveable feasts; that is, they are lunar festivals timed to phases of the moon. Thus, their occurrence might slip around from one year to the next. Other Egyptian festival dates were set by the motion of the stars, the planets, and the actions of the sun.

In any true sense it would be impossible for us to know the actual recurring dates of many of the festivals. We can, however approximate the ancient dates, which is what most Egyptologists do.

During the season of Inundation more major public festival occurred than at any other time of the year, most of them related to fertility rites and abundance rituals. The feasts tended to occupy the general public during this time because the land was so flooded that little real work could be done.

The festival calendar, as it appears to us now, spans three thousand years of Egyptian history and probably was being recorded, observed, and manipulated many thousands of years before that. In those three millennia a great many political and religious changes affected the designated feast days. Some feasts fell out of favor, others were renamed, a few were entirely forgotten.

From: Feasts of Light

Promote Your Page Too
Bread Crumbs
A trail of bread crumbs in case you lose your way wandering through this site ... Pagan Calendar > Blog Page > Egyptian Festivities > Festivals of Ancient Egypt