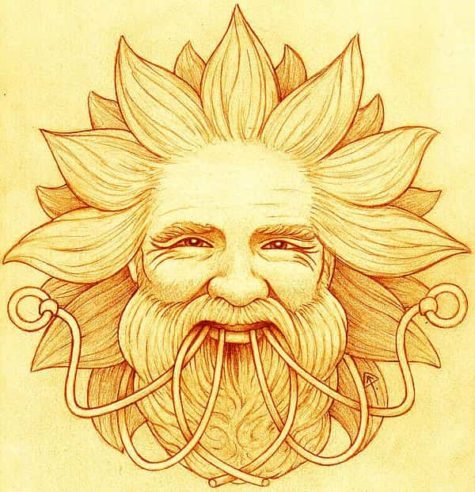 Belenus, whose name means “Bright One,” was one of the most ancient of Celtic gods. The Celtic fire festival, held on the eve of the first of May, known as Beltane, (the fires of Bel) is probably derived from the name of this deity. Beltane fires were lit to encourage the sun’s warmth. These fires also had restorative properties and cattle were herded between them before being loosed on the new spring pastures.

Closely connected to the Druids, ruler of science, healing, hot springs, fire, success, prosperity, purification, crops, vegetation, fertility. It is likely that Belenus (Bel, or Beli) was a fire deity, a patron of flame and the sun’s restorative powers (which explains his classical association with Apollo). Originally he may have been a pastoral deity and in Cymric myth is associated with cattle, sheep and crops. Though this may be because Beltane was the time that herds were moved to the high pastures.

The Celtic god of light and healing, “Bel” means “shining one,” or in Irish Gaelic, the name “bile” translates to “sacred tree.” It is thought that the waters of Danu, the Irish All-Mother goddess, fed the oak and produced their son, The Dagda. As the Welsh Beli, he is the father of Arianrhod by Don.

Patron of sheep and cattle, Bel’s festival is Beltane, one of two main Celtic fire festivals. Beltane celebrates the return of life and fertility to the world — marking the beginning of Summer and the growing season.

Taking place on April 30 (May Eve) and in some areas on May 1, Beltane also is sometimes referred to as “Cetsamhain” which means “opposite Samhain.” The word “Beltaine” literally means “bright” or “brilliant fire,” and refers to the bonfire lit by a presiding Druid in honor of Bile.

Promote Your Page Too
Bread Crumbs
A trail of bread crumbs in case you lose your way wandering through this site ... Pagan Calendar > Blog Page > April > Festival of Belenus