The dates for this ritual varies from year to year. The word ‘Purnima’ means full moon, therefore the Vat purnima vrat is observed on the full moon day (15th day) of the Hindu month of Jyeshtha that is during the month of May-June as per the Gregorian calendar. In 2017, this falls on June 9. In 2018 it will fall on June 27. 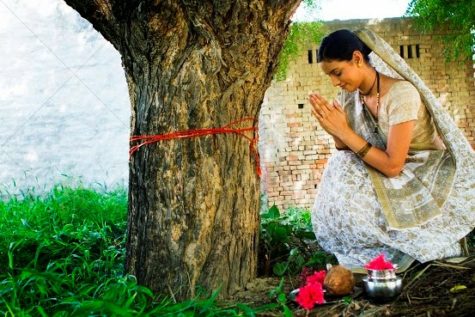 Vat Purnima or Wat Purnima (वट पूर्णिमा, vaṭapūrṇimā, also called Vat Savitri is a celebration observed by married women in the Western Indian states of Gujarat, Maharashtra, Karnataka and some regions of eastern Uttar Pradesh. On this Purnima, a married woman marks her love for her husband by tying a ceremonial thread around a banyan tree. The celebration is based on the legend of Savitri and Satyavan as narrated in the epic Mahabharata.

The legends dates back to a story in the age of Mahabharata. The childless king Asvapati and his consort Malavi wish to have a son. To have a child, he performed penances and offered prayers. Finally the God Savitr appears and tells him he will soon have a daughter. The king is overjoyed at the prospect of a child. She is born and named Savitri in honor of the god.

Since she was born due to her father’s severe penances, she naturally led an ascetic life. However, she is so beautiful and pure,all the men in her village are intimidated and no man will ask for her hand in marriage. Her father tells her to find a husband on her own. She sets out on a pilgrimage for this purpose and finds Satyavan, the son of a blind king named Dyumatsena who lives in exile as a forest-dweller. Savitri returns to find her father speaking with Sage Narada who tells her she has made a bad choice: although perfect in every way, Satyavan is destined to die one year from that day.

Her father asked her to find someone else, but she refused, saying that she could select a man only once in a lifetime since she was of an ascetic spirit. Narada and her father agree. Savitri insists on going ahead and marries Satyavan. 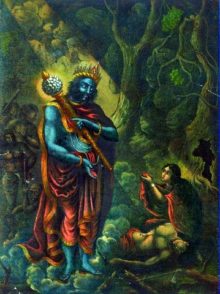 Three days before the foreseen death of Satyavan, Savitri takes a vow of fasting and vigil. Her father-in-law tells her she has taken on too harsh a regimen, but she replies that she has taken an oath to perform the regimen and Dyumatsena offers his support. The morning of Satyavan’s predicted death, he is splitting wood and suddenly becomes weak and lays his head in Savitri’s lap and dies.

Savitri places his body under the shade of a Vat (Banyan) tree. Soon, the messengers of Yama appear on the scene to take away her husband, but Savitir refuses to hand her husband over to them. They can not take him away until Lord Yama Himself appears. Savitri follows him as he carries the soul away. She offers him praise. Lord Yama, impressed by both the content and style of her words, and seeing her matchless devotion, spiritual knowledge, and determination, offers her a boon.

She first asks for eyesight and restoration of the kingdom for her father-in-law, then a hundred children for her father, and then a hundred children for herself and Satyavan. The last wish creates a dilemma for Yama, as it would indirectly grant the life of Satyavan. However, impressed by Savitri’s dedication and purity, he asks her to wish one more time, “forgetting” to mention his denial to grant the third wish.

Savitri immediately asked for the life of Satyavan. The death god Yama who does not spare even an ant, grants life to Satyavan and blesses Savitri’s life with eternal happiness.

Satyavan awakens as though he has been in a deep sleep and returns to his parents along with his wife. Meanwhile, at their home, Dyumatsena regains his eyesight before Savitri and Satyavan return. Since Satyavan still does not know what happened, Savitri relays the story to her parents-in-law, husband, and the gathered ascetics. As they praise her, Dyumatsena’s ministers arrive with news of the death of his usurper. Joyfully, the king and his entourage return to his kingdom.

Though the tree does not play a significant role of the story, The banyan tree holds a unique significance in Hindu religion. As per the Hindu scriptures, it holds the essence of the three great Gods in Hindu mythology, Brahma-Vishnu-Mahesh. The roots represents Brahma, the stem of Vat Vriksha is Vishnu while Shiva represents the upper part. It is believed that performing the rituals of the puja under this sacred tree, the devotees can fulfill all their desires. It is also worshiped in memory of the love in the legend. 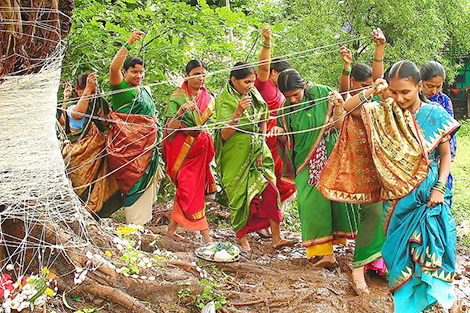 The festival is followed by married women only, and is prohibited for children and widows. On this day wives pray to the Divine for their husbands’ prosperity and longevity by performing Vat Purnima Puja Vidh which includes tying ritual threads around the trunk of a banyan tree; this ritual is also called the Peepal Puja.

In the present day, the festival is celebrated in the following way. Women dress in fine saris and jewelry, and their day begins with the offering of any five fruits and a coconut. Each woman winds white thread around a banyan tree seven times as a reminder of their husbands. They fast for the whole day.

The fast is also sometimes observed throughout the night until the next morning. The next morning women break their fast and offer charity to Brahmins. Women engage in the worship of a banyan tree, and listen to the legend of Savitri.

After, the women offer water to the tree and spread red powder (kumkum) on it, cotton threads are wrapped around the tree’s trunks and they do parikrama or circumambulate seven times around it. 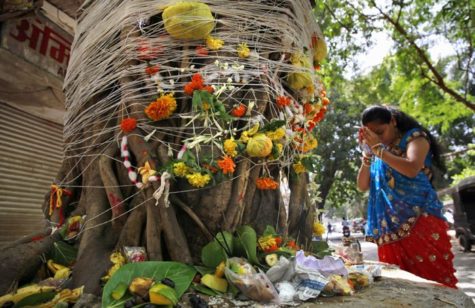 Alternatively, on the occasion of Vat Purnima, women keep a fast of three days for their husbands, as Savitri did. During the three days, pictures of a Vat (banyan) tree, Savitri, Satyavan, and Yama, are drawn with a paste of sandal and rice on the floor or a wall in the home. The golden engravings of the couple are placed in a tray of sand, and worshiped with mantras (chanting),  vermilion, saffron, sandalwood incense, fruit, and Vat leaves.

Outdoors, the banyan tree is worshiped. A thread is wound around the trunk of the tree, and copper coins are offered. Strict adherence to the fast and tradition is believed to ensure the husband a long and prosperous life. During the fast, women greet each other with “जन्म सावित्री हो” (English: “Become a Savitri”). It is believed that until the next seven births their husband will live well.

Just in the way that Savitri got her husband, Satyavan back from Yumraj, it is known that women who observe this auspicious fast will be blessed with good fortune and blissful married life.

Promote Your Page Too
Bread Crumbs
A trail of bread crumbs in case you lose your way wandering through this site ... Pagan Calendar > Blog Page > June > Vat Purnima