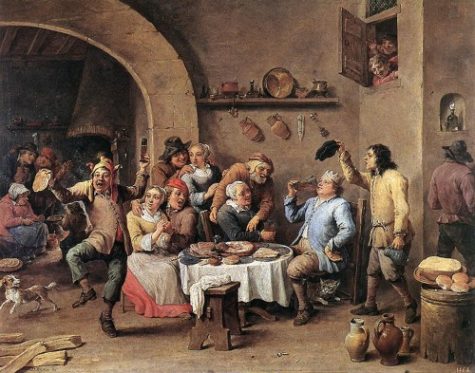 In Old England, The Twelfth Night marked the end of the winter festival that started on Samhain. The Lord of Misrule symbolizes the world turning upside down with the coming of winter. In the middle ages, the Twelfth Night began on the eve of December 25th moving forward 12 days to January 6th, hence the name the twelve days of Christmas.

The Twelfth Night festival marked the onset of the winter solstice, the point in late December when the sun, whose daily arc had reached its lowest, darkest, coldest point, began its rise toward the longer, warmer days and the coming of spring. On December 25th, the ceremonial Yule log was hauled in to start the hearth fire around which its members and visitors would gather throughout the rest of the Christmas festival days.

Twelfth Night was the final frenzy of feasting, drinking and merry making before the townspeople returned to daily life for the remainder of winter. A grand cake was the focus of the celebratory feast as well as Wassail, Fig Pudding and other generous tasty handmade dishes.

On this night, it was customary for the assembled company to toast each other from the wassail bowl. In Old English, wassail means “Be in good health,” but the term came to be applied to the drink itself (usually spiced ale). See our recipe for Traditional Wassail. It was also traditional to cook the most wonderful pastries, cakes, and pies. Some included practical jokes. The “four and twenty blackbirds baked in a pie” was no myth. Live birds were placed in a cooked pastry crust. When guests cut into the pie, the birds flew about the room which delighted all. A kinder tradition included placing bread soaked with cider in tree branches for the birds to eat.

In the ancient times of the Roman Saturnalia, the “king of the feast” was elected by beans, and the Twelfth Night cakes included a bean–or, later, a ring or coin. Whoever was given the slice with the prize became the queen and king for the night and much parading and merriment followed.

In the church calendar, Twelfth Night is the evening before Epiphany (January 6). Because the three wise men (or kings) arrived in Bethlehem bearing gifts for the infant Jesus, Epiphany is also called Three Kings Day and a traditional time of gift giving.

Promote Your Page Too
Bread Crumbs
A trail of bread crumbs in case you lose your way wandering through this site ... Pagan Calendar > Blog Page > Christmas Celebrations > Twelfth Night