The Month of Ghosts 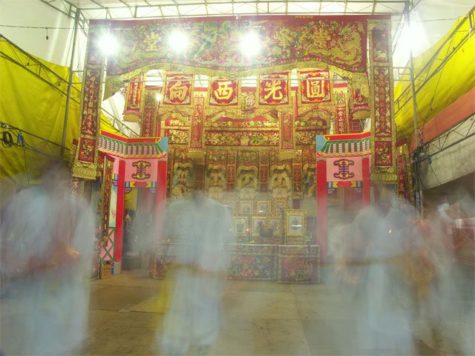 The seventh lunar month in the traditional Chinese calendar is called Ghost Month. These dates vary from year to year, in 2017, Ghost Month runs from August 28 to September 19, and the Ghost Festival is on Sept 5.

On the first day of the month, the Gates of Hell are sprung open to allow ghosts and spirits access to the world of the living. The spirits spend the month visiting their families, feasting and and looking for victims.

There are many taboos in the Ghost Month. For example, do not wear the clothes with your name, do not pat other people on the shoulder, do not whistle, children and senior citizens should not go out at night.

There are three important days during Ghost Month. On the first day of the month, ancestors are honored with offerings of food, incense, and ghost money – paper money which is burned so the spirits can use it. These offerings are done at makeshift altars set up on sidewalks outside the house. 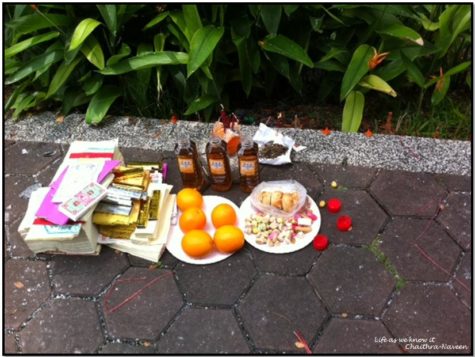 Almost as important as honoring your ancestors, offerings to ghosts without families must be made, so that they will not cause you any harm. Ghost month is the most dangerous time of the year, and malevolent spirits are on the look out to capture souls.

This makes ghost month a bad time to do activities such as evening strolls, traveling, moving house, or starting a new business. Many people avoid swimming during ghost month, since there are many spirits in the water which can try to drown you.

The 15th day of the month is Ghost Festival, sometimes called Hungry Ghost Festival. The Mandarin name of this festival is zhōng yuán jié (中元節 / 中元节). This is the day when the spirits are in high gear. It’s important to give them a sumptuous feast, to please them and to bring luck to the family. Taoists and Buddhists perform ceremonies on this day to ease the sufferings of the deceased. 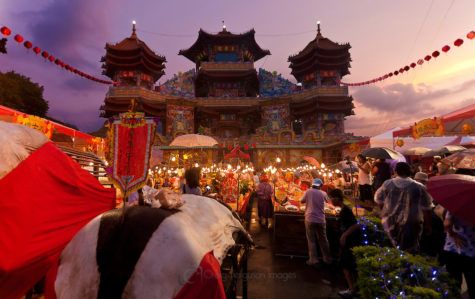 The last day of the month is when the Gates of Hell are closed up again. The chants of Taoist priests inform the spirits that it’s time to return, and as they are confined once again to the underworld, they let out an unearthly wail of lament.

The idea of a feast for the ghosts comes from a story of Buddhism. Moggallana was one of Buddha Shakyamuni’s best students. He had various supernormal powers and owned the divine eyes. One day, he saw his deceased mother had been born among hungry ghosts. 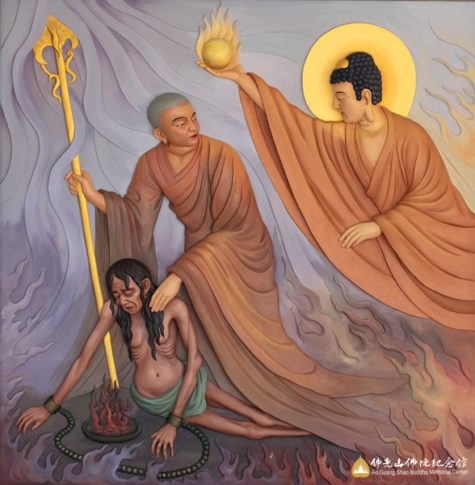 He went down the Hell, filled a bowl with food to provide for his mother. Before reaching his mother’s month, the food turned into burning coals which couldn’t be eaten. Moggallana cried sorrowfully and asked for help from Buddha.

Buddha said the sins of his mother were deep and firmly rooted, and couldn’t be forgiven just using the divine power. It would require the combined power of thousand monks to get rid of her sins. Buddha told Moggallana:

“the 15th day of the 7th lunar month is the Pavarana Day for the assembled monks of all directions. You should prepare an offering of clean basins full of hundreds of flavors and the five fruits, and other offerings of incense, oil, lamp, candle… to the greatly virtuous assembled monks. Your present parents and parents of seven generations will escape from sufferings.”

Following Buddha’s instructions, Moggallana’s mother obtained liberation from sufferings as a hungry ghost by receiving the power of the merit and virtue form the awesome spiritual power of assembled monks on 15th day of the 7th lunar month.

Today, similar rituals are held in the Buddhism temples on this day for the deliverance of all suffering spirits.

Found at: Mandarin.About.Com and other sources

Promote Your Page Too
Bread Crumbs
A trail of bread crumbs in case you lose your way wandering through this site ... Pagan Calendar > Blog Page > August > The Month of Ghosts