The Dance of the Devils 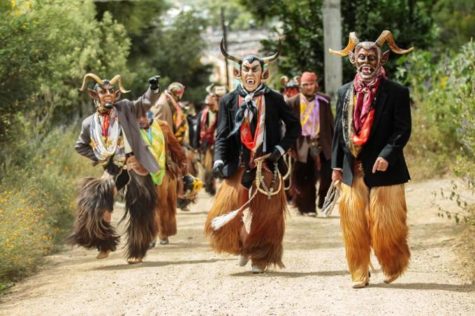 The Dance of the Devils (La danza de los diablos) is a dance performed in Costa Chica, the Pacific coast of Guerrero and Oaxaca in Mexico. As part of the ‘Day of the Dead’ festivities celebrated on the last days of October and the first days of November in Mexico. Its purpose is not so much to terrify however as to amuse and draw the community together while paying reverence to the spirits of the dead on the Day of the Dead.

Men dressed in rags and high boots perform the Dance of the Devils in Afro-Mexican communities. During these celebrations young men dress up as cowboys or as dead people, in which case they wear dusty clothes covered with terrain (to represent the passage of time and the fact of being buried underground). Their faces are covered with masks made of leather or paper with long beards and hair. A black beard represents a young devil, a white beard represents an old one. A small pair of goat or deer horns crowns the mask. 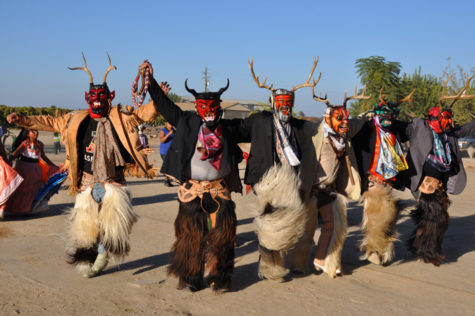 The men dance through different villages on All Souls Day, making noise and playing with children and young people by flogging them with a whip.

An elder diablo called el Terron, and a female diabla called la Minga, who carries a baby doll, lead the dancers. The elder diablo plays and whips the other diablos into dancing and chases la Minga around with the whip because she interrupts the concentration of the devil dancers. One way that la Minga attempts to disrupt the other dancers is by seduction, the Minga also tries to give her doll, which is a symbol of her productive power, to the dancers or to anyone in the audience, seeking a father to her ‘baby’.

The face of the men performing the dance is covered with a leather deer mask with horns and An elder devil, called Tenango, whips the other devils during this performance. Groups of 24 dancers (the devils) stomp and twirl in rows or circles along the streets; eventually, they stop at the houses where the owner gives them money or food for dancing. 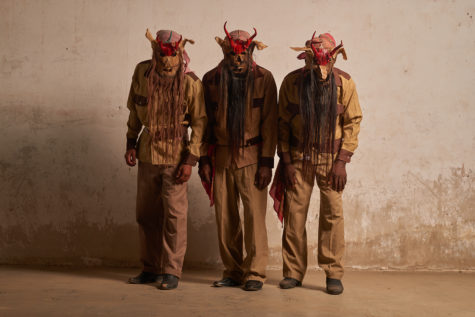 Origins of the Dance of the Devils:

The Dance of the Devils is part of the ceremonial commemoration of the dead. It is a celebration of colonial origin, which was introduced by the black people of the Costa Chica of Guerrero and Oaxaca, who were brought there as slaves by the Spanish colonizers to work in mines, cotton plantations and cattle ranches.

From Río Grande, in the town of Tututepec, on the Oaxacan coast, to Tenango, in the municipality of Azoyú, to the north, this dance recalls the past times when ranchers or cowboys used the whip as well as trumpet to groups of wild cattle in order to force them to cross the Sierra Madre del Sur, to reach the plateau and sell the animals.

The Devils in the Mexican dance also use the whip, and behave according to the cowboy stereotype, that is, as brave and strong man. This performance, however, is also a historical memory, which becomes a ritual memory to the black population which was an intermediate caste, between the indigenous and the white land owners.

The black population who arrived in Mexico from very different lands such as Africa and the Antilles, bringing different languages and cultures, could not recreate a black culture of African traits, as could happen instead, to various degrees, in other Afro-American regions. These people therefore in their segregation from festivities and public celebrations organized by the masters of the haciendas, used to perform their own festivities secretly, by performing rituals to their African gods, playing drums and dancing. 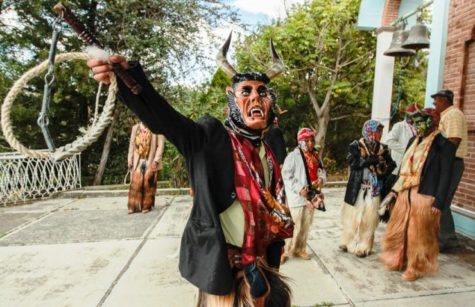 At the same time, however, they borrowed elements of some indigenous and Catholic traditions and readopted them – with imagination and joy – to overcome the pain of domination and the humiliation of banishment.

It is no coincidence that the celebration of their ancestors is performed through the cowboy/devil figure. In this dance the ritual action harmonizes gestures and words. Devils are the dead who revive to do mischief, to steal, to sow fear and laughter. The dance could also be called the ‘Devil’s Game’, a game designed to laugh at the forbidden: a capataz (a boss), a bad mother, or a violent and bossy father.

The function of the Dance of the Devils, from a social aspect, is to cleanse and protect the community from spirits that carry evil energy. It can be viewed a way to control evil. In a sense, the dance is used to call the tono spirits of the ancestors to heal the community similar to the way an individual might be healed; the masks and the boite drum call the spirits and the dance is the mode of healing. Trance possession, another traditional healing mode, is also part of these dances, as a means to form a connection between the spiritual and material.

The dancers use their bodies to bring the spirits and form a bond between them and the community. “As they dance, they create an aura, which begins to rise and cover everyone who is sitting there. ” Even the children will come and sit quietly and watch. The force, she says, starts in the dancers’ hands and continues through their feet, legs, hips, shoulders, and faces until they are entirely transformed. The wearing of the tono masks allows them to achieve a more powerful transformation. 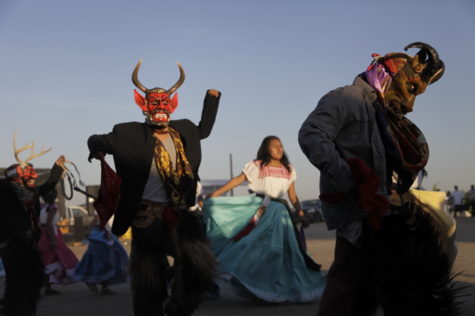 The dance itself is strikingly similar to the egungun dances of West Africa; the performance is a form of ancestor reverence, and similar dances that may be seen throughout the Diaspora (the dispersion of the people from their original homeland). While the Dance of the Devils occurs within a context that includes European and Native influences, the core of the dance, its meaning and specific elements, are African.

The Dance of the Devils can be traced to Europe during the Middle Ages, but according to an Afro-Mestizo elder, the devils are spirits of the dead and not devils in search of souls.  They are actually ancestral spirits whose presence is celebrated and encouraged. Similar to a dance performed by the Abakua in Cuba, dressing as a diablo (devil) symbolizes the willingness to allow the spirit to possess your body.

The egungun masquerades of West Africa are, like the Dance of the Devils, performed as part of a feast of the dead. Masks are worn which represent the dead, symbolically, but not as individual persons; flogging with whips is intended to promote growth and maturity in young men and fertility in women. The egungun dances were a strong social force in the societies where they originated, especially in times of unrest or external threat. 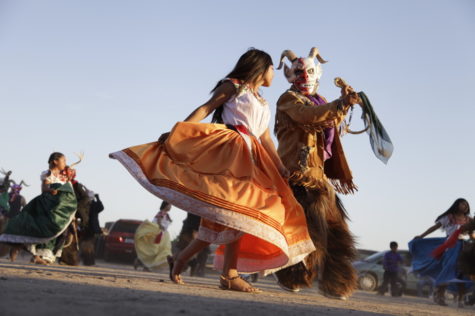 Another similarity is that while only men generally perform the dances, there is often at least one woman who either participates on some level or teaches the dance.

It has been suggested that the presence of the whip is a reference to the relationship between the former slaves and their overseers. However, the presence of flogging in the egungun dances of West Africa, when compared to Nana Minga and her baby, suggests that flogging is another African retention and bears its original symbolic meaning of fertility and protection against evil spiritual energy.

The dance being performed on the Day of the Dead leads one to think that the dance relates to the supernatural world of the spirits. The fact that the dancers dress in cowboy clothes and wear masks made of horse hair may be interpreted to mean that the dance represents the spirits of dead cowboys, the employment of many of the Afro-Mestizos cimarron ancestors. However, the masks, which appear animal-like, may in fact represent the tono spirits of ancestors, an idea supported by the presence of the boite drum.

The boite or bute, is a large gourd with a goatskin head; the drum is played by moving a stick through a hole in the center to create a vibration, not by striking. It is very similar to a drum used by the Abakua, an all-male secret society in Cuba, and is described in a similar fashion, as having the voice of a big cat, a leopard or jaguar, because of the roaring sound it makes.

When attempting to heal someone of sickness Afro-Mestizos call the animal tono of the sick person. Finding the person’s tono is a way to determine if the sickness is caused by the animal’s death. Healers in attempt to cure a person called the leopard, using the roaring sound of the boite drum to simulate the voice of the big cat.

Promote Your Page Too
Bread Crumbs
A trail of bread crumbs in case you lose your way wandering through this site ... Pagan Calendar > Blog Page > Day of the Dead > The Dance of the Devils