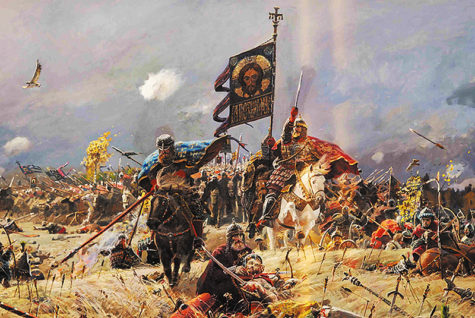 Vidovdan (St. Vitus Day) is one of the important religious holidays for the Serbs. It’s annually observed on 28 June (Gregorian Calendar), or 15 June according to the Julian calendar, in use by the Serbian Orthodox Church to venerate St. Vitus. It is an important part of Serb ethnic and Serbian national identity.

Observation of this feast is connected with the Battle of Kosovo in 1389. According to the Serbian Orthodox tradition, the Serbian national identity was founded on the day, when the Ottoman Empire defeated Serbia in the Battle of Kosovo and slew prince Lazar. Ruling sultan of the Ottoman Empire was killed on the same day by Serbian knight Miloš Obilić.

Serbs consider Vidovdan a very important day, that is why many historic events in Serbia took place on June 28, for instance, signing of the Treaty of Versailles (1919), proclamation of Serbian constitution (1921), Slobodan Milošević’s deportation to the International Criminal Tribunal, etc.

In the late Middle Ages, people in Germany and countries such as Latvia celebrated the feast of Vitus by dancing before his statue. This dancing became popular and the name “Saint Vitus Dance” was given to the neurological disorder Sydenham’s chorea. It also led to Vitus being considered the patron saint of dancers and of entertainers in general.

It is also a day for weather watching:

“If St. Vitus’ Day be rainy weather,
It will rain for 30 days together.”

There are no reliable facts about existence of Saint Vitus. According to Christian legend, Vitus was the son of Roman senator from Sicily. He converted to Christianity under influence of his mentor. Satin Vitus died as a martyr during the persecution of Christians by Roman Emperors Diocletian and Maximian.

Vitus is considered the patron saint of actors, comedians, dancers, and epileptics, similarly to Genesius of Rome. He is also said to protect against lightning strikes, animal attacks and oversleeping.

Sources: Wikipedia and Any Day Guide

Promote Your Page Too
Bread Crumbs
A trail of bread crumbs in case you lose your way wandering through this site ... Pagan Calendar > Blog Page > June > St Vitus Day – Vidovdan