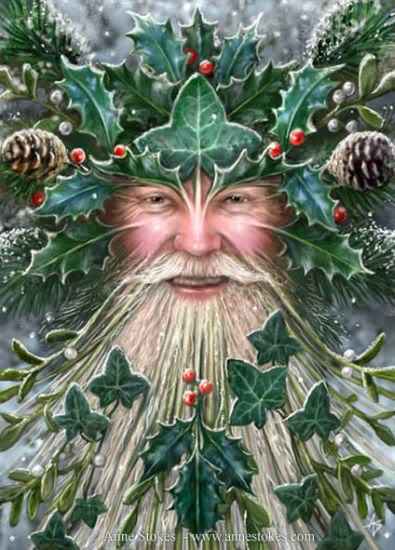 Also known as Mithras (for the Persian Sun God), Saturnalia (for the Roman God of sowing and husbandry) and The Great Day of the Cauldron (from Druid Legend). It is the celebration of the return, or rebirth, of the Sun God, the Lord of Life. The celebrations were traditionally performed with the utmost solemnity, yet also with the highest rejoicing, for they resolve the paradox of Death and Rebirth. It represents the redemption of the world from Death and Darkness, as such it is a celebration of hope and joy amidst the gloom of winter.

The word Yule can be traced to the Celtic word `Hioul” which means wheel. This festival is an important point in the turning of the wheel of the year. Wreaths were made to symbolize this wheel, combining solar significance with tree-god significance. In ancient times Celts venerated trees as earthly representatives of the Gods, and it was felt that nothing short of the sacrifice of a mighty tree-god would cause the receding sun to take pity on them and return.

The burning of the Yule log was thought, through sympathetic magick, to increase the brightness and strength of the Sun, and would therefore bring good luck. Passersby would tip their hat or nod in salutation to the log. It is traditional to cut the log from oak or from a slow-burning fruit tree. The fire was lit from a piece of the previous years Yule log, which had been saved for this purpose. It was believed that this piece of the old log was a charm against fire, because it would refuse to burn until it was time to light its successor. A wish was also made while pouring wine over the burning log. It was believed to be bad luck if the log burned out before the 12 days of Yuletide were over. The ashes from the fire were spread in the fields to bring fertility to the next crop.

The Wassail bowl is another favored part of Yule celebrations. A large bowl or pot was filled with wassail, a mixture of cider and spices, and warmed over the Yule fire. The meaning of the word wassail is to be `hale or hearty’, and was the reason for the many toasts and salutations made from the bowl. It was also common for a procession to go to the nearest orchard and wassail the trees, thus blessing them and encouraging them to bear a good yield in the coming season. Libations of wassail were also poured over the roots of the trees, and cider drenched cakes were left in the forks of the older trees as an offering to the trees spirit.

Mistletoe is a regeneration symbol, considered to be the Essence of Life due to the resemblance of the juice of the berries to male semen. It was often gathered at this time. Evergreen boughs are also symbols of renewal. Evergreens were decorated to show honor to the tree spirits. The lights on modern trees were the candles of old, and represent the newly born sun god. Trees were not cut down and brought indoors.

The Sacred Seed of Life, having been nurtured by the foster mother Tailltiu, sprang forth from her breast, and was born. As the Wyrrd had foretold, here was the Child of Promise, son of the Gods and of the Earth. This baby was the Sun God, born in the Rule of Darkness, by the magick of the Gods. He was destined to grow in strength and knowledge. It was his task to bring back life and warmth to the land, and to wrest the power from the Lord of Darkness. To appease Cernunnos, who is at the peak of his strength, the people made sacrifices of roasted boar. To distract Callieach, the Wise Ones, or Witches invoked her to teach them of her mysteries. To aid the new-born Sun God the Celts felled a giant oak tree, and burned the log as a sacrifice, that the sun would gain strength from it, and grow.

Despite the powers of Cernunnos and Cailleach, the signs of new life were still upon the land. The sacred seeds which had fallen onto the barren branches of the winter-dead trees had come to life, and thus became the Mistletoe, which could be seen hanging from the oaks in the forests. Upon the land these sacred seeds had grown into the sweet smelling evergreens, and thus they were decreed to be a part of the celebration.

In honor of this magickal birth the people decorated the evergreens with candles and other symbols of life. The Druids told of Hu-Gadarn, the first druid, who had fled from the Atlalntean flood with his family on this day on the Ark, “The Great Cauldron” in which they brought the Essence of Life, and the knowledge of magick into the world. They would also tell tales of the Killing of the Wren, and of the Battle between the Oak King and the Holly King. Throughout the land the people rejoiced, and there was light in the midst of the darkness.

Promote Your Page Too
Bread Crumbs
A trail of bread crumbs in case you lose your way wandering through this site ... Pagan Calendar > Blog Page > Christmas Celebrations > More Yule Myths and Lore