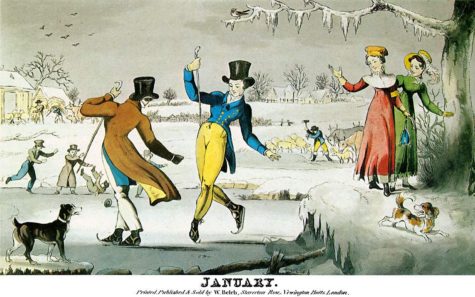 The word January comes from the Roman name for this month; it was named after the god Janus who had two faces. This deity ruled over beginnings and endings, the past and future. Since January is reckoned as the first month of a new year, this connection with the god Janus is appropriate. It is an excellent time to work on putting aside the old and outdated in one’s personal life and making plans for new and better conditions.

Power flow: sluggish; below the surface; A good time for spell work having to do with beginning and conceiving; protection; reversing spells; conserving energy by working on personal problems that involve no one else; getting your various bodies to work smoothly together for the same goals.

The Chinese use the concept of putting aside the old and outdated in one’s personal life and making plans for new and better conditions in celebrating their New Year, which occurs on the first day of the New Moon when the Sun is in Aquarius. They considered this celebration a time for settling debts, honoring ancestors, and having family reunions. They carry paper images of dragons through the streets and set off fireworks to chase away evil entities and misfortune.

Tsao-Wang was the Chinese kitchen god or deity of the hearth and domestic comfort; his picture hung above the stove. He was the protector of the family and recorder of their actions and words. His report at the end of each year to the Heavenly Jade Emperor was said to determine the family’s coming fortune. Because of this, the Chinese burned the old picture-image and put up a new one a few days before New Year. His wife had the task of reporting on female family members.

Even the people of Tibet, whose year began about the end of January, had a celebration for expelling the Old Year. They made a dough image for the demons to inhabit, then worshiped them for seven days. At the end of that period, they took the image outside the village to a crossroad and abandoned it. The idea behind this seems to have been that the negative beings who had accumulated during the Old Year, received recognition for their existence, but also received a firm statement, by the action of leaving their image outside the village, that they were not welcome to hang around.

Most cultures had some ceremony for ending an old cycle of the calendar and celebrating the beginning of a new cycle. Physical activity acknowledging the end and beginning of cycles sets off similar changes in the subconscious mind. This change in the subconscious is necessary in order for actual physical changes to come about. Such rituals are helpful when one faces the end of cycles in relationships, career, residence, or other life situations.During the Feast of Kore, which was held at night with much feasting and dramatics, a group of initiates bearing torches went down into the goddess’s underground chamber. With much ceremony and reverence, they brought out the wooden statue of Kore, naked except for her golden jewelry. The statue was placed on a decorated litter and carried seven times around the temple. The Greeks considered that the number seven brought luck and success.

The Incan festival of Camay Quilla was held at the New Moon.

The Seven Deities of Luck in Japan were honored during a three-day festival called San-ga-nichi. To avoid good luck being swept away, there was no sweeping during this festival. These Seven Deities are also called Shichi Fukujin or Shichi-Kukujin, which means “Seven Gods of Happiness.” There are six gods and one goddess that make up this little group. They sail about in a treasure ship called a takarabune.

Promote Your Page Too
Bread Crumbs
A trail of bread crumbs in case you lose your way wandering through this site ... Pagan Calendar > Blog Page > January > January Lore > January Celebrations and Rituals