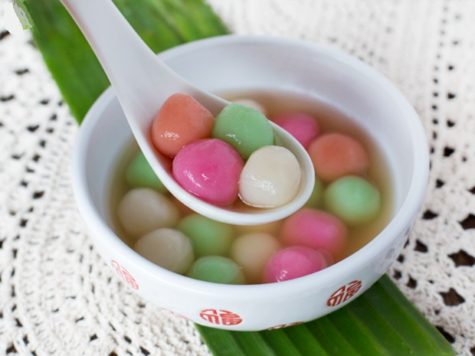 A popular snack all over China, glutinous rice balls (tang yuan) are filled with red bean, sesame, peanut, and other sweet fillings that ooze out from mochi-like dumplings skins. The dumpling skins owe their pleasantly gummy texture to glutinous rice flour, which produces a chewier dough.

You’ll find packets of frozen tang yuan at most Chinese supermarkets, and these days the fillings not only come in the standard assortment, but have branched out into fancy-sounding ones like “sweet osmanthanus” and “chestnut and sesame seed.”

The dough for tang yuan is a simple combination of glutinous rice flour, regular rice flour, and water. Once you get the hang of enclosing the dough around nuggets of sweet filling, you’ll find that making your own tang yuan takes no more than half an hour.

The best part about making your own is that you can experiment with all kinds of nuts and pastes. The filling is a simple combination of sugar, lard, and a filling of nuts and/or beans. Instead of ground peanut or sesame, you can use almonds, cashews, and pecans. (To prepare the nuts: roast them, chop them up, and grind them in a mortar and pestle before mixing with lard and sugar.)

Or, if you’ve always found the red bean filling in supermarket tang yuan to be bland, you can make your own from dried adzuki beans. Coconut flakes are a great addition to fillings of any kind.

You can even vary the fat, substituting coconut oil for the traditional lard. I like to use the lard that I confit with for a filling that’s extra meaty and mildly savory. You could also play around with smoky bacon fat.

Really, you can’t go wrong with the filling. Who would turn down chewy rice balls that release a lava-like concoction that’s sweet, nutty, and porky? Even the water in which tang yuan simmers is surprisingly soothing and tasty to sip between rice ball bites. Make the balls in large batches and freeze them for a quick breakfast or dessert. 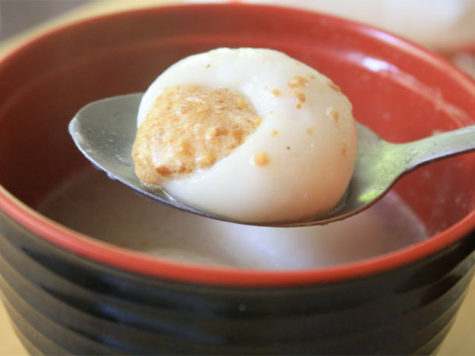 For the dumpling skin:

To make the filling:

Grind the seeds or nuts in a mortar and pestle to a fine but not powdery consistency. In a small saucepan, melt the lard. In a small bowl, mix the lard with the sugar and ground nuts. Chill the mixture in the refrigerator or freezer for a few minutes before use.

To make the skins:

Mix the two flours together and add the water to make a soft but non-sticky dough. Divide the dough in half. Working on a surface dusted with rice flour, roll each half into a cylinder about 1 1/2 inches thick and cut the dough into segments about 1 inch wide.

To make the dumplings:

Take one piece of dough and make an indent with your thumb to flatten it. Place the stuffing into the indent and draw the sides of the dough up to enclose it. Roll it gently between your palms to make a smooth ball. Lay the dumplings on a tray dusted with rice flour until you are ready to cook them. They can also be refrigerated or frozen.

To cook the dumplings:

Fill a large pot with water and bring to a boil. Add the dumplings and gently stir to prevent sticking at the bottom of the pot. Simmer for 15 minutes, taking care not to let the water boil vigorously or else the dumpling skins will tear. The dumplings are done when the skins are almost translucent. Ladle the dumplings into soup bowls along with the cooking water. 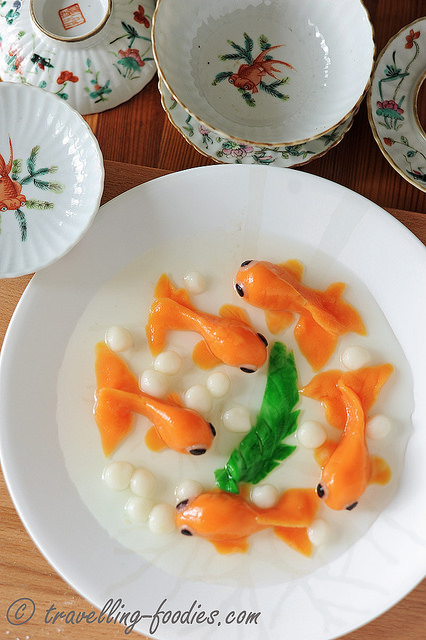 Rolling glutinous rice dough into tangyuan is really easy but shaping it at will requires a bit more practice. For coloration, I’d decided to go al naturale as well, using carrot juice for the orange bodies and charcoal powder for the eyes. I’d to use a bit of pandan essence for the leaves but I reckon it would be good if the juice from poached spinach or pandan leaves were used.

Keep the unused dough covered with a damp cloth to keep it soft, as the dough dries out fairly quickly and soon becomes crumbly. But it can always be reconstituted and soften with a dab of warm water ready in a small bowl at hand.

The recipe for the glutinous rice dough is very easy to remember. Its just about 100g of glutinous rice flour to 70-80g of tepid water give and take. Always have extra flour AND warm water at hand to adjust the texture and elasticity of the dough as required. I was in the “trying out” mood and didn’t weigh the carrot juice, charcoal powder, as well as the extra flour used.

About this Chinese Snack Food: 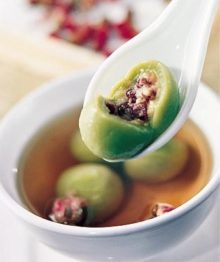 Tangyuan or tang yuan is a Chinese food made from glutinous rice flour mixed with a small amount of water to form balls and is then cooked and served in boiling water. Tangyuan can be either small or large, and filled or unfilled. They are traditionally eaten during Yuanxiao or the Lantern Festival, but also served as a dessert on Chinese wedding day, Winter Solstice Festival, Cold Food Festival, and any occasions such as family reunion, because of a homophone for union (simplified Chinese: 团圆; traditional Chinese: 團圓; pinyin: tuányuán)

Historically, a number of different names were used to refer to tangyuan. During the Yongle era of the Ming Dynasty, the name was officially settled as yuanxiao (derived from the Yuanxiao Festival), which is used in northern China. This name literally means “first evening”, being the first full moon after Chinese New Year, which is always a new moon.

In southern China, however, they are called tangyuan or tangtuan. Legend has it that during Yuan Shikai’s rule from 1912 to 1916, he disliked the name yuanxiao (元宵) because it sounded identical to “remove Yuan” (袁消), and so he gave orders to change the name to tangyuan.

For many Chinese families in mainland China as well as overseas, tangyuan is usually eaten together with family. The round shape of the balls and the bowls where they are served, come to symbolize the family togetherness.

While tangyuan was originally a food eaten during festivals, it has become a dessert consumed year-round rather than simply a festival food. For instance, tangyuan is traditionally in white color. Yet, in order to cater to consumers’ needs and changing tastes, dessert specialty shops create new flavors or colors of tangyuan by substituting the traditional filling with chocolate, mashed potato and pumpkin paste.

Thus, tangyuan has already evolved into a dessert that is consumed by Chinese from time to time throughout the year and is no longer limited to festivals. In both filled and unfilled tangyuan, the main ingredient is glutinous rice flour. For filled tangyuan, the filling can be either sweet or savory.

Sweet fillings can be:

Promote Your Page Too
Bread Crumbs
A trail of bread crumbs in case you lose your way wandering through this site ... Pagan Calendar > Blog Page > Asian Celebrations > Glutinous Rice Balls