From Magickal Ingredients we have this great information about Sunflowers. Enjoy! 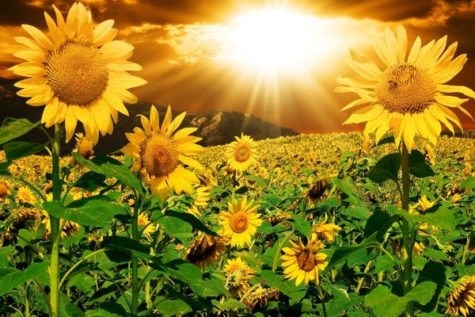 When summer is at its peak, its not uncommon to see rows of sunflowers blooming in all of their colorful glory. Ranging from just a foot or two high to well over eight feet in height, sunflowers come in a variety of yellows and oranges. Sunflowers have been growing in North America for ages, so there is a significant amount of folklore surrounding them.

No flower can lift someone’s spirits quite like sunflowers. They are bright and cheery, and as warm and inviting as the sweet summer sun. With brilliant yellow petals, also known as “rays,” sunflowers have an unmistakable sun-like appearance.

As its name signifies, the sunflower has close solar associations, not only because of its appearance, but also because of its habit of turning its head to follow the course of the Sun during its journey across the sky.

Spirits of the dead are drawn to this flower, for it reminds them of the sunlit world they once lived within.

The sunflower has magickal powers, too, and adorned the crowns of Roman emperors, thereby conferring the ruler with the potent power of the Sun that the flower held within it. The sunflower was later adopted by the Christian Church to denote the saints, prophets, and apostles of the faith; as the flower follows the Sun, so the true believer follows God. 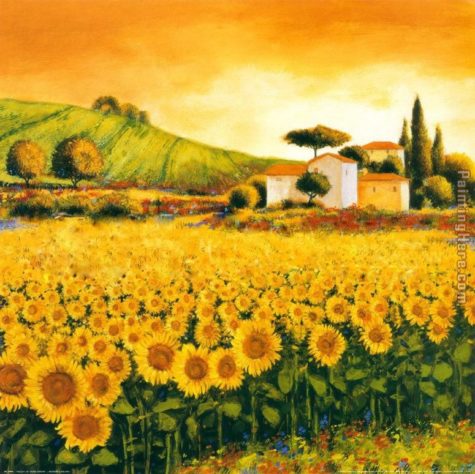 The sunflower originated in South and Central America, and migrated north, most likely due to the migration of Spanish conquistadors. Remains of sunflowers dating back 4,600 years have been found in Mexico. In the 1500s, Spanish explorers took sunflowers back to Europe with them, and the species has spread around the world since then.

In the 16th century, Inca priestesses in Peru worshiped a giant variety of the sunflower plant. This plant was a symbol of the Inca sun god.

The Inca priestesses wore clothing that was adorned with large flower shaped ornaments. These ornaments and decorations were made from gold, and the image of the sunflower was often carved into golden breastplates.

The sunflower was sacred to Native Americans; the flowers were used extensively in celebrations and festivities.

They held spiritual ceremonies such as the Sun Dance. As well as being a food source, the flower became a symbol of strength and endurance. They would put sunflower seeds on top of graves containing their dead.

Early colonists in North America learned about the many uses of sunflowers from the tribes near them. In addition to being useful as a source of yellow and orange dye for fabric, the sunflower also comes in handy medicinally – it was known for its antimalarial properties. 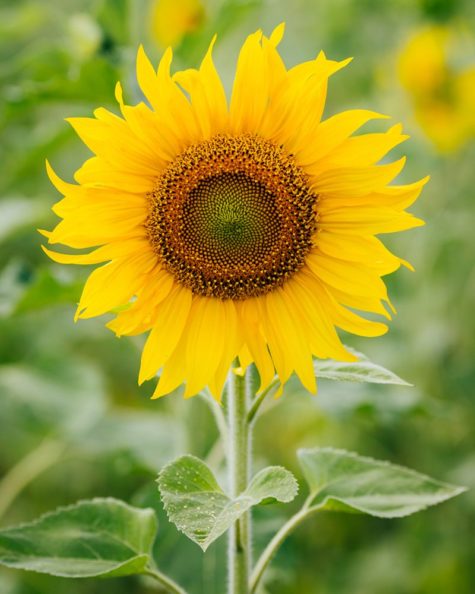 The Greek legend had it that a nymph called Clytie and the Sun God, Helios, were in love. But Helios cast aside poor Clytie for another lover. Clytie died of grief and was transformed into the sunflower, destined to live alone and having to follow the course of her former love. Therefore the sunflower, as a symbol has adopted an aspect of Clytie’s personality: the inability to overcome the emotions or to “let go.”

There was a maiden who fell in love with Apollo. Every time he passed overhead in his fiery sun chariot, she stood in her garden and gazed at him longingly, even though she had chores and tasks to attend to. Apollo, who made a point of shining brightly so people on earth couldn’t actually see him, eventually got fed up with the girl’s foolishness. He flung one of his sun arrows at her, and she turned into a sunflower on the spot.

To this day, she faces east in the morning and west in the evenings, following the path of Apollo. In some versions of the story, it was not Apollo but the other gods who took pity upon her and turned her into a sunflower. 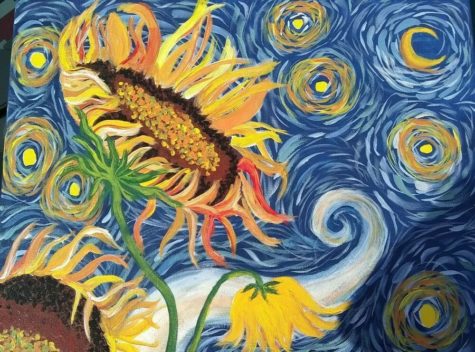 The sunflower is a symbol of light, hope, and innocence, and has been adopted fairly recently as a symbol for world peace.

Sunflowers are known for being “happy” flowers, making them the perfect gift to bring joy to someone’s (or your) day.

In many folkloric traditions, sunflowers are seen as symbols of good luck. Sunflowers are often associated with truth, loyalty, and honesty.

The seed head of the sunflower contains a magical symbol. It shows a perfect example of the golden spiral that has been created naturally. This shape is one of the cornerstones of sacred geometry.

The Victorian language of flowers gave it various connotations, so that in certain contexts it stood for lofty ideas, or less flatteringly as a symbol for false riches.

In China, this flower symbolizes longevity or long life. It may be due to the sun which is perceived to have an enduring life even though eventually it will die out.

On a practical note, when these plant stems are cut to make flowers for vases and bouquets, they can last for 2-3 weeks so are quite hardy.

In dreams, the sunflower is believed to be a very lucky symbol or motif. It is viewed as symbolizing career and employment ambitions, wealth, good fortune and positive opportunities.

This flower is quite the lucky charm for someone who may be beginning on a new career path or starting a job.

One of the sunflower’s greatest and most important symbolic meanings is that of having a nuclear-free world. This flower was chosen back in 1996 in order to represent a world of peace and one that is free of any harmful nuclear weapons.

New varieties and seeds were planted during this time on an old Ukrainian missile base and also planted across nuclear disaster sites such as Fukushima, Chernobyl and Hiroshima.

The flowers have been shown to absorb harmful toxic elements and radiation from the soil and clean up the environment. Being so good for the environment as well as beautiful to look at, it is no wonder that the sunflower has now truly become a symbol of peace and also hope for the future of humankind. 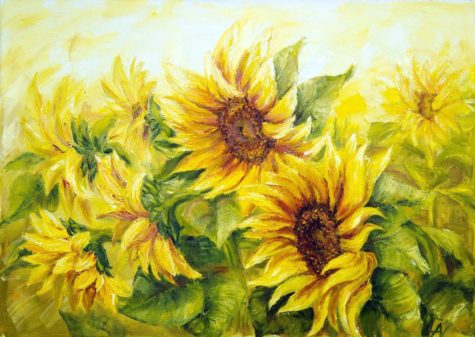 Faery flower sorcery sees the sunflower as harnessing the energy of the sun itself, making it useful for positive magick and lightwork. The light contained in its yellow petals radiates strength, useful for dispelling depression and encouraging a healthy sense of pride.

The flowers growing in the garden bring the blessings of the Sun. The seeds are often eaten by women who wish to conceive. This is done during the waxing Moon.

Always include a sunflower or sunflower seeds in a birthday spell to increase happiness, health, and years. Sprinkle the seeds on the earth to invoke prosperity. Place the flowers on a love altar to invoke a long-lasting relationship.

Sunflowers are symbols of good luck. Planting them around your home and garden will bring fortune your way. It is also said that if you pick a sunflower at sunset, then wear it on your person, it will bring you good luck the following day.

Sunflower seeds that dry and remain on the flower head are said to possess the magickal capacity to grant wishes. Hold an individual seed in your left hand and make your wish. Eat the seed or plant it in Earth.

Sunflowers are also associated with truth, loyalty, and honesty. If you want to know the truth about something, sleep with a sunflower under your pillow – and the next day, before the sun goes down, the truth should be revealed to you.

To reveal a thief, place three sunflowers under your pillow. The thief will be revealed in your dreams.

The sunflower is considered a flower of loyalty because day after day, it follows the sun, from east to west. In some folk magic traditions, it is believed that slipping a bit of sunflower oil or seeds into someone’s food or drink will cause them to be loyal to you.

The sunflower is often associated with fertility, thanks to its connection to the sun. To bring about conception, eat sunflower seeds or take a ritual bath with sunflower petals. A necklace or crown of dried sunflower heads can be worn–particularly at Litha, the summer solstice–to bring about fertility.

In 17th Century Europe, some rural practitioners of folk magic used an ointment that would help them see the Faerie folk. This used a blend of several summer, sun-oriented flowers, mixed in with sunflower oil and left in the sun for three days until it thickened.

Some people believed that sunflower seeds were preventatives against the spread of smallpox.  Weave and knot dried sunflowers into necklaces and wear them to magickally repel smallpox.

In some forms of Hoodoo, the sunflower is associated with great joy. The oil is often used as a base in magical oils for ritual purposes. You can blend your own magical sunflower oil by blending freshly harvested petals into a carrier or base of sunflower seed oil, which is available in most grocery stores.

Please note that this is not the traditional hoodoo sunflower oil recipe, but it is still one that is effective. Once you’ve mixed your oil, consecrate it according to the method of your own magical tradition before using it in spellwork or ritual. A simple way to do this, with sunflower oil, is to leave it in the sun to absorb solar energy prior to use. 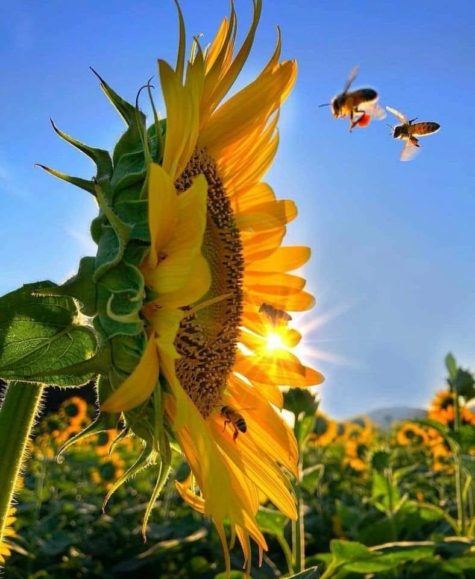 The Spiritual Meaning of the Sunflower

The sunflower appears to worship the sun because the blooms have been thought to face the sun as it slowly moves and travels across the sky each day.

Many people view this flower as being highly spiritual. These flowers appear as if they follow the sun as it moves each day from East to West in the sky. It makes the flowers look as if they are highly loyal and devout, just as a follower of faith is.

In a spiritual meaning, these plants are seen as being genuine followers of the sun. This has a connection with Christians following God and other religions following their spiritual guide or divine being.

No matter how small or how little light there is, sunflowers are believed to seek out the light and hold their heads high as if in worship and adoration of the sun.

They are therefore a symbol of true and faithful loyalty to something that is much brighter and bigger than themselves. 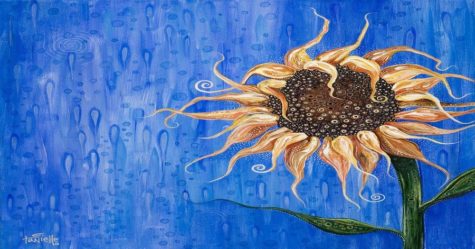 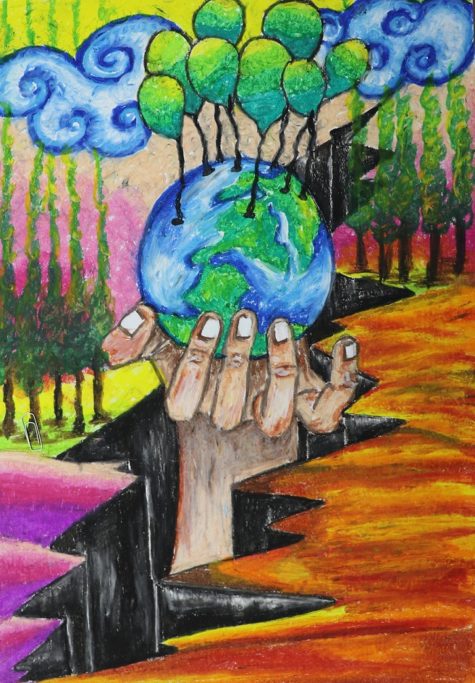 Bread Crumbs
A trail of bread crumbs in case you lose your way browsing the Projects... The Prosperity Project > New and News > Here Comes The Sun > Sunflowers Are Magickal
Archives
Counting Visitors