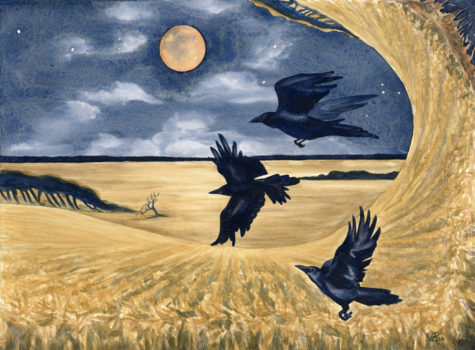 In August, we celebrate the beginning of the Corn Moon. This moon phase is also known as the Barley Moon, and carries on the associations of grain and rebirth that we saw back at Lammastide. August was originally known as Sextilis by the ancient Romans, but was later renamed for Augustus (Octavian) Caesar. Some Native American tribes knew that the sturgeon of the Great Lakes and Lake Champlain were most readily caught during this full Moon, for them it was the Full Sturgeon Moon. Others called it the Green Corn Moon or the Grain Moon.

As the summer begins winding down, we’ve made it through the first harvest of Lammas/Lughnasadh, and now it’s time to think about bringing in the next phase of crops. Grain is ready to be threshed and baked into bread. If you have a garden, pick your herbs and veggies, so you can preserve or dry them before the cooler days set in. Gather your herbs and hang them in a dark place to dry, so you can use them all winter, either for magical needs or culinary ones.

Energies should be put into harvesting, gathering vitality and health, also friendships. Harness some of the Corn Moon’s fiery energy for your ritual and spell work. This is a good time to focus on your spiritual and physical health. It’s the time to harvest what you can now to put aside for later use. What sacrifices can you make today that will benefit you further down the road?

Collected from various sources including: PaganWiccan

One Response to The Full Corn Moon

Promote Your Page Too
Bread Crumbs
A trail of bread crumbs in case you lose your way wandering through this site ... Pagan Calendar > Blog Page > August > August Lore > The Full Corn Moon