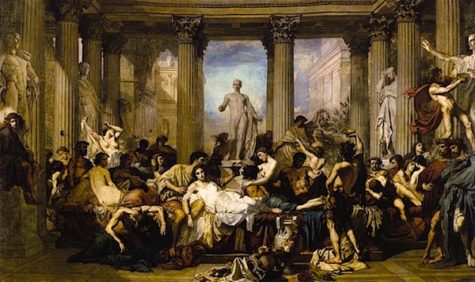 Saturnalia was an ancient Roman festival in honor of the deity Saturn. Originally it was held on 17 December of the Julian Calendar, but the party later expanded with festivities through to 23 December. The poet Catullus called it “the best of days”.

Saturn being an ancient national god of Latium, the institution of the Saturnalia is lost in the most remote antiquity. In Roman mythology, Saturn was an agricultural deity who was said to have reigned over the world in the Golden Age, when humans enjoyed the spontaneous bounty of the earth without labor in a state of innocence. The revelries of Saturnalia were supposed to reflect the conditions of the lost mythical age, not all of them desirable. The Greek equivalent was the Kronia.

Falling towards the end of December, at the season when the agricultural labors of the year were completed, it was celebrated by the country-people as a sort of joyous harvest home, and in every age was viewed by all classes of the community as a period of absolute relaxation and unrestrained merriment. The festival was extended in later times to three and still later to seven days.

The special feature of the festival was the gift of wax candles and of little images of wax or clay called sigilla. The public festival, in the time of the republic, was for only one day; but for seven days the celebration continued in private houses.

Many of the customs of the Roman Saturnalia were taken over by the Christian Church in celebrating Christmas. Thus the origin of the Christmas-tree, and the custom of making presents to children and friends may be traced back to the Roman Saturnalia, while the Yule-log and Yule-fire are remnants of ancient sun-worship, one of the Roman festivals in honor of the Sun god being celebrated on the 25th of December as “Dies Natalis Solis Invicti.”

Although probably the best-known Roman holiday, Saturnalia as a whole is not described from beginning to end in any single ancient source. Modern understanding of the festival is pieced together from several accounts dealing with various aspects.

Saturnalia festivities began with ritual and sacrifices in the Temple of Saturn. The statue of the god was hollow and filled with olive oil, as a symbol of his agricultural functions. His feet were bound with woolen strips, that were unbound at Saturnalia.

After the rituals, the Senators (who had to be present) dismissed the crowd with the cry of “Io, Saturnalia!”, a sign for the happy festivities of family parties and other private gatherings to begin. The traditional gifts were wax tapers and little dolls, although gifts of silver later became traditional.

The custom of the Lord of Misrule was appropriated and survived through to English Christmas traditions.

The biggest part of Saturnalia was attitude more than decoration. Feasting, drunkenness, merrymaking, hopefully the conception of more children (or at least enjoying those activities which led to conception!), pranks, gift giving, role reversals (not true ones, only symbolic ones – slaves weren’t really free to make a freedman’s decisions and anything they did or decreed would reverse at the end of Saturnalia, children weren’t really adults and could not enter into any binding contracts or make business deals, etc.) and so forth.

The role reversals seemed to be more for minor privileges – slaves and children got to be waited on for meals, and to lead the rituals, and to participate in the revelry as if they were their parents/masters. The parents/masters jokingly played the part of slaves and children by waiting on them and making rude and bawdy jokes at their expense. Sometimes, it descended into cruelty.

Many of the decorations involved greenery – swathes, garlands, wreaths, etc – being hung over doorways and windows, and ornamenting stairs. Ornaments in the trees included sun symbols, stars, and faces of the God Janus. Trees were not brought indoors (the Germans started that tradition), but decorated where they grew.

Food was also a primary decoration – gilded cakes in a variety of shapes were quite popular, and children and birds vied for the privilege of denuding the trees of their treats. The commonest shapes were fertility symbols, suns and moons and stars, baby shapes, and herd animal shapes (although, to be honest, it’s hard to tell if some of those ancient cookie cutters are supposed to be goats or deer). I would imagine coins were also a popular decoration/gift.

People were just as likely to be ornamented as the trees. Wearing greenery and jewelry of a sacred nature was apparently common, based on descriptions, drawings, and the like from the era. Although the emphasis was on Saturn, Sol Invictus got a fair share of the revelry as well.

On a modern note:

This ancient midwinter festival falls at the time when non-Romans are celebrating Christmas, Hanukkah, Solstice and/or Kwanzaa. In Nova Roma, individual Citizens have chosen different approaches to the challenge of celebrating in the spirit of Rome without cutting themselves off from the culture in which they live.

Gold, because the sun is yellow, is always a sure choice for a good Saturnalia decoration. For modern Saturnalia, those golden glass ball ornaments are ideal, as are gold sun faces, gold stars, and gilded anythings. Gilding nuts and pine cones and nestling them among the swags and wreaths of greenery would be a lovely way of acknowledging the ancient roots of this ceremony.

Indoor trees are not ancient Roman, but if you have plants growing indoors, decorating them would certainly be in the spirit of the holidays. If you just have to have the now-traditional indoor tree, try decorating it in gold ornaments with a solar theme. Swathe it in bright red or purple ribbons (2 colors quite in favor with the Romans, and looks great with the gold ornaments). Top the tree with a sun, rather than a star, for after all, this is a solar celebration.

Wild parties with lots of food and drink is good. Letting the children of the household lead the common rituals, and waiting on them (assuming you don’t do so in everyday circumstances….) at mealtimes, and deferring to them in decisions on party ideas would work for role reversals.

No children in the house? Maybe you can borrow one for a day. We don’t have slaves, but, for a nice touch of role reversal, we could purchase the services of a nanny or a housekeeper for the duration of Saturnalia. It would be a role reversal of sorts, for instead of being the slave of your home, someone else would be doing the chores and cooking and childcare while you got to party down!

Dancing and singing in the streets is now frowned upon, unless you can get a parade permit. A parade, if you could organize it, would be fun. Imagine – giant floats of the Gods tended by the priests and acolytes, musicians and dancers, contortionists to amaze and delight, acrobats and jugglers, all in honor of Saturn!

Promote Your Page Too
Bread Crumbs
A trail of bread crumbs in case you lose your way wandering through this site ... Pagan Calendar > Blog Page > December > Saturnalia