This year (2018) is particularly unique in that January and March both contain two full moons while February has no full moon. This means that there are two Blue Moons. What is a Blue Moon? 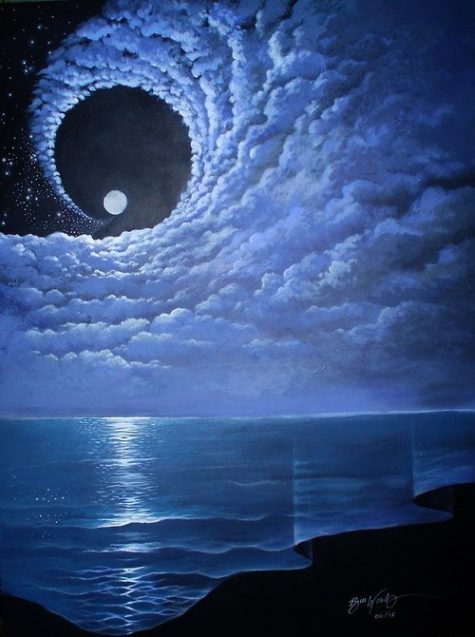 IN MODERN times, the term “blue moon” is defined as the second full moon occurring within a single month. By a somewhat older definition, it’s the third full moon in a season that has four — instead of the normal three — full moons. Either way, it’s an out-of-the-ordinary phenomenon occurring only once every few years. Hence the phrase, “once in a blue moon.”

This is an especially magickal time, think of it as a lunar bonus round, a chance to ask for special “once in a blue moon” favors, or to work with “once in a lifetime” spells.

The 2018 January Blue Moon is also a Supermoon, and a total Lunar Eclipse so this will be a prime time for magickal workings.

Why does this happen?

A full lunar cycle is a little over 28 days long. However, a calendar year is more than that, which means that during some years, you may end up with thirteen full moons instead of twelve, depending on where in the month the lunar cycle falls. This is because during each calendar year, you end up with twelve full 28-day cycles, and a leftover accumulation of eleven or twelve days. Those days accumulate, and so about once every 28 calendar months, you end up with an extra full moon during the month.

Historically, “blue moon” was understood in a more literal way. Once upon a time it denoted a phenomenon even rarer than an extra full moon, one that has occurred perhaps only once or twice in recorded history: the face of moon literally appearing to turn blue in color.

The Blue Moon will likely look no different than any other full Moon. But the Moon can change color in certain conditions.

After forest fires or volcanic eruptions, the Moon can appear to take on a bluish or even lavender hue. Soot and ash particles, deposited high in the Earth’s atmosphere can sometimes make the Moon appear bluish. Smoke from widespread forest fire activity in western Canada created a blue Moon across eastern North America in late September 1950. In the aftermath of the massive eruption of Mount Pinatubo in the Philippines in June 1991 there were reports of blue moons (and even blue Suns) worldwide.

Promote Your Page Too
Bread Crumbs
A trail of bread crumbs in case you lose your way wandering through this site ... Pagan Calendar > Blog Page > Almanac Events > Blue Moon Magick and Lore