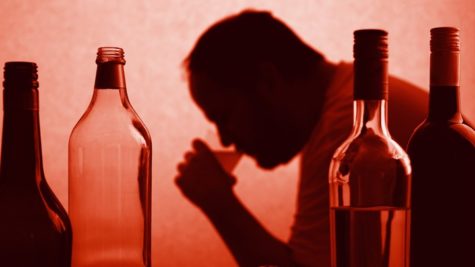 Alcoholism refers to addiction to alcohol. It is a chronic disorder, in which a person is unable to refrain from frequent and excess consumption of alcohol for physical or psychological reasons. The World Health Organization (WHO) has listed alcoholism as one of the three most deadly killer diseases of the 20th century.

Alcoholism is also one of the serious social problems. It often brings poverty and certain amount of crime and results in material unhappiness and broken homes. It also leads to numerous traffic accidents.

Alcohol is not a product found in nature. It results from decomposition and as such belongs to a family of poisons. Ethyl alcohol, the main intoxicating ingredient in wine, beer and distilled liquor is a toxic drug which depresses the brain and nervous system. Alcohol cannot be called a food for it enters the alimentary canal and is not changed or digested in any way. It is quickly absorbed in the bloodstream and then travels to every part of the body, adversely affecting vital organs like brain and liver.

Symptoms According to the WHO, “Alcoholics are those excessive drinkers whose dependence on alcohol has attained such a degree that it shows a noticeable mental disturbance or interference with their bodily or mental health, their interpersonal relations and their smooth social and economic functions, or who show the prodormal signs of such development. ”

Alcoholics have a puffy face with bloodshot eyes, a hoarse voice and a rapid pulse. They are suspicious, irritable and over-emotional. Vomiting, delirium, impaired judgement and disturbed sleep are some of the other symptoms. The chronic alcoholic, who would rather drink than eat, fails to get enough vitamins. The few vitamins acquired by him are drained out of his system in the process of burning the alcohol in his body. Vitamin deficiency can lead to delirium tremors, convulsions, nutritious, disorders of the eyes and impaired memory.

Excessive drinking often causes premature graying of hair due to vitamin deficiency. Chronic alcoholism results in a depletion of minerals in the body, particularly magnesium. Its lack produces symptoms like tremor of the hands, feet and tongue, convulsions, mental clouding, and perspiration.

Excessive drinking imposes a strain on the liver. It gradually destroys its functions and often causes cirrhosis of the liver. It leads to disorders of the stomach and bowels. It can cause brain damage as brain cells are often affected by it. Alcohol also affects the heart which becomes weak and flabby.

Alcoholism results from intemperate drinking. Sometimes it sneaks upon a person comparatively rapidly; other times, years may pass before a person becomes a full-fledged alcoholic. A weak-minded person consoles himself by taking to drugs or alcohol. In doing so he simply tries to escape the situation rather than face it boldly. A person generally takes to drinking as a means to enliven social life, to overcome anxiety or to induce sleep. He becomes an alcoholic if he gets dependent on alcohol physically and psychologically. He resorts to heavy drinking because of his maladaptive way of dealing with life’s stresses. 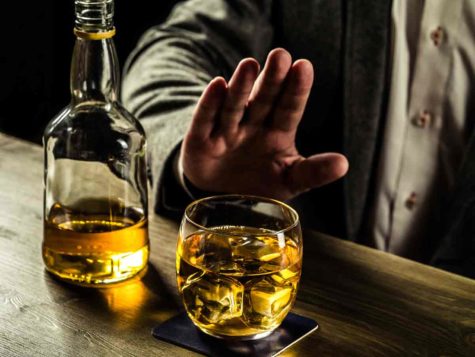 The chronic alcoholic first of all must make a firm resolve to stop drinking. He should abstain from alcohol all at once for the habit cannot be got rid of in gradual stages. The most effective way to treat alcoholism is to build the body’s nutritional integrity soaps to prevent craving for stimulants like drinks.

The patients should be put on a cleansing juice fast for at least ten days in the beginning. During this period, he should have juice of an orange every two hours from 8 a.m. to 8 p.m. The juice may be diluted with warm water, if desired. If orange juice does not agree, vegetable juices may be taken. Each day while fasting, bowels should be cleansed of effete and poisonous matter thrown off by the self-cleansing process set up by the body. This can be achieved by warm water enema.

During the juice fast, the patient will usually feel no craving for alcohol. This will give a good 10 day start towards breaking the drinking habit and would help remove not only the physical dependence but also the psychological factors. After the initial fast on juices, the optimum diet of vital nutrients is essential. Such a diet should consist of whole grains, cereals, nuts, seeds and sprouts, fresh fruits and vegetables.

It is advisable that in the beginning of the treatment, the patient is given a suitable substitute to relieve the craving if and when such a craving occurs. The best substitute drink for alcohol is a glass of fresh fruit juice, sweetened with honey, if desired. In the alternative, wholesome candy may be taken. The patient should always have easily available juices, candy, or other snacks to be taken between meals if he feels a craving for a stimulant. All refined foods such as sugar, white rice, macaroni products and white flour and meat should be avoided.

The patient should eat several small meals a day in preference to two or three large ones and avoid strong condiments such as pepper, mustard, and chili. He should not smoke as this will only increase his desire for alcohol. Apples are considered valuable in the treatment of alcoholism as their use removes intoxication and reduces the craving for wine and other intoxicating liquors. The raw celery juice is also considered helpful. It has a sobering effect and is an antidote to alcohol.

In addition to proper nutrition, plenty of rest and outdoor exercises are necessary. The healthy condition of the appetite center, which controls the craving for alcohol is improved by exercise. Yogic asanas for general health such as padmasan, vajrasan, vakrasan, paschimotanasan, yogamudra, bhuajangasan, halasan and shalabhasana and yogic kriyas like jalneti, kunjal and simple Pranayamas like kapalbhati , anuloma-viloma, shitali and sitkari will be beneficial.

Copious drinking of water, hot fomentations on the stomach and abdomen with a wet girdle pack between applications are also effective water treatment for alcoholism. And finally, it will be advisable to follow the ten commandments to prevent alcoholism, offered by psychiatrist Dr. William B. Terhune.

From The Complete Handbook of Nature Cure