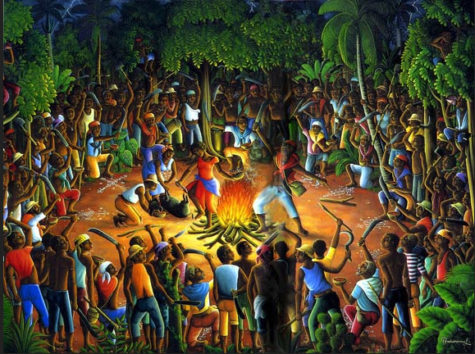 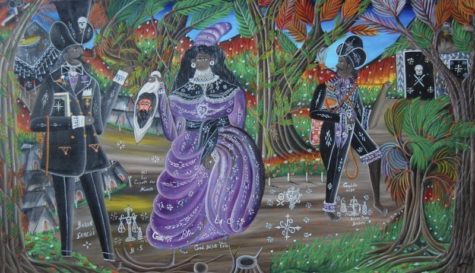 “It’s like New Year’s Day for the dead.” That’s how Sherly Turenne sums up the celebration for Ghede spirits, led by Baron Samedi, god of death in Haiti’s Vodun tradition. 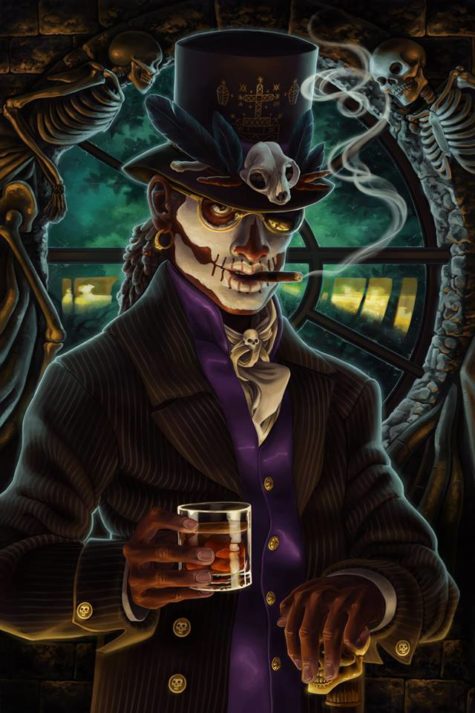 He is anticipated with happiness as the protector of children, provider of wise advice and the last best hope for the seriously ill. Celebrated on Nov. 2, along with the Catholic All Souls’ Day, Ghede (GEH-day) is also a day to remember and honor ancestors.

All boons granted by the Ghede must be repaid by this date or they will take their vengeance on you.

With a population of 8.5 million, Haiti is 90 percent Catholic and 100 percent Vodun (VOH-doon), a religion that accommodated the practices and principles of captives from Dahomey, Yorubaland, Congo and Angola who were brought to the island during the African slave trade.

The Dahomey/Yoruba term can refer both to the verb gede, to cut through, and igede, incantation, hinting at cutting through to mystery, in this case the mystery of death. Because the Africans combined the elements of their various geographical regions, there came to be in Haiti many Ghedes, several Barons and a creole term referring to a formal god, all referring to the dead and death itself.

Ghedes are part of the pantheon of gods known as Loa (Loh-WAH). Ghede then, as the ruler of death and embodying also the principle of resurrection, governs the preservation and renewal of life. He is sometimes also referred to with affection as Papa Ghede.

People will put on their Sunday best, and go to church first thing in the morning to pray.

Then they will go home and put on the regalia of the ragtag Ghedes, as the spirits of the underworld are often called, or the elegant Baron Samedi (SAHM-dee) in his black, white and purple color scheme. An outfit can be as simple as a white blouse and skirt and purple neck scarf or can include a black top hat and tails, a baton or cane, a red bandanna or multicolored necklaces. 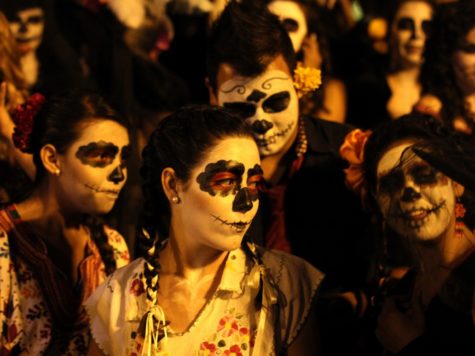 It is also common to wear makeup – painting half the face white with black around the eyes or even just dusting the face with flour. Once dressed, celebrants go to the town cemetery, where those who have ancestors there will clean the tombs of their loved ones and leave food for them in remembrance.

The spiritual adepts, the women called mambos and the men called houngans (HONE-gahn), joined by drummers and singers, will pray at a cross rising from a tomb, the symbol of Baron Samedi, summoning the spirits. And then the partying begins.

The seeming contradiction may be difficult for Americans to comprehend. The god of death, Baron Samedi nevertheless pokes fun at death and with his raunchy humor and suggestive, lewd dancing makes fun of the human passion that brings life.

A typical altar in honor of Ghede would include cigarettes; clarin, a Haitian white rum spiced with habanero peppers; a small white image of a skull; white, black and purple candles; satin fabric in the same colors; crosses; a miniature coffin; sequined bottles and a chromolithograph of St. Gerard, a saint associated with Baron Samedi. No altar would be complete without the requisite top hat and cane. 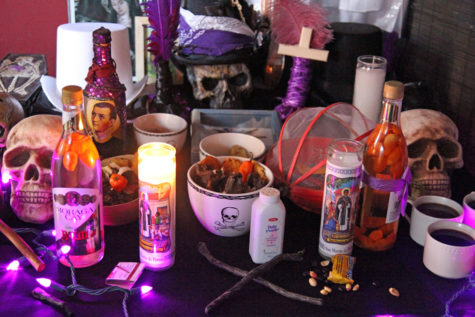 Oakland dance instructor Portsha Jefferson, whose great-grandmother was Haitian, has been celebrating the holiday for years, both at home and as part of a public gathering. She will prepare a veritable feast for her ancestors, including greens, yams, macaroni and cheese, corn bread, red beans and rice, cabbage, baked chicken and fried snapper, with sweet potato pie for their dessert.

She will begin her day by pouring a libation and offering a prayer in thanks and ask for their blessing. Her altar for Ghede will be refreshed with clarin and set with a vase of fresh flowers and a new white candle. Then she’ll pack up her scandalous Ghede outfit, a black gown with silver and purple sequins that is slit on each side to midthigh, borrow the Baron’s top hat and go to the community celebration, which she has been planning with partner Lee Hetelson.

It was started by the Petit la Croix dance company’s Blanche Brown, who taught Haitian dance in the Bay Area for decades; Jefferson, who took it over in 2003, sends out an e-mail to adepts and dancers asking for volunteers.

“I have people set up on the day-of – decorations, constructing the altar, food preparation, hiring musicians, graphic designers for flyers, administrators for marketing,” she said.

Many community celebrations feature special performances, costume contests, dancing and dance workshops, along with the opportunity to have fun. A Ghede feast is a chance for drummers to play and dancers to dance. It has become really popular, with people wearing Ghede’s clothes.

The party also seems to have a spiritual impact on participants. “I’ve been surprised to hear that people – after dancing- it would lighten up their spirit or help them get through whatever problem they were having at the time.”

In Haiti, preparations had been go on for weeks. At traditional worship sites, called hounfours (HOWN-for), devotees prepare the altar with drapo (flags or cloth) in black, white and purple, lay out Ghede’s attire, and soak habanero peppers in vinegar or water to later be added to clarin for the drink few but the Ghedes can bear to swallow.

The food placed around the altar is very important. It is also important that all the things for other gods are put away. This is to make sure that all of The Baron’s needs are there for when he comes. 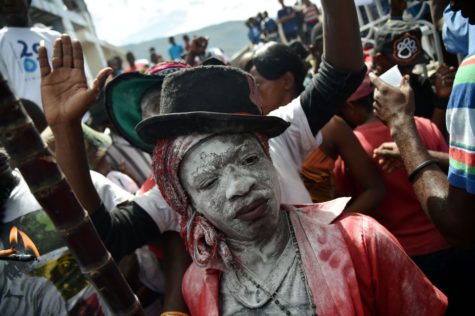 The Haitians head to a sprawling cemetery in the country’s capital of Port-au-Prince, where voodoo priests and priestesses gather around what is thought to be the nation’s oldest grave.

A man dressed as a “Gede”, or spirit of voodoo, greets people as they enter the cemetery

They then light candles and start small fires to recall the spirit of Baron Samedi the guardian of the dead.

The Day of the Dead festival takes place on November 1 and November 2, when voodoo followers remember relatives who have passed away and asks spirits to grant them favours or offer them advice.

Vendors set up in the cemetery and sell things such as rum, candles and rosary beads.

He is one of the most important of all the loa, Damballa is the Sky Father and the primordial creator of all life. He rules the mind, intellect, and cosmic equilibrium. Damballa, as the serpent spirit and “The Great Master”, created the cosmos by using his 7,000 coils to form the stars and the planets in the heavens and to shape the hills and valleys on earth. By shedding the serpent skin, Damballa created all the waters on the earth.

Read more about him here: Damballah

Promote Your Page Too
Bread Crumbs
A trail of bread crumbs in case you lose your way wandering through this site ... Pagan Calendar > Blog Page > Voodoo