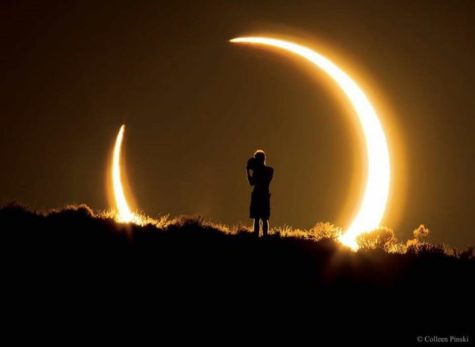 Agathos Daimon means “good spirit” and is a religious observance held on the second day of each lunar month, immediately following the Noumenia. It is the third celebration of a trio of household monthly observances. A good spirit usually refers to a type of divine being that is less powerful than a God, is personal to each family, and can bring the family good luck, protection, or some type of assistance. Household spirits are usually seen as either snakes or as a young man with a horn of plenty in hand.

More about this spirit can be found at The Powers That Be:

Some celebrate the Agathos Diamon by pouring a libation to the spirit and asking for his continued blessings on the family. If there is something in particular that your family wishes help with, give an additional offering to your family’s protective spirit. Although we know we can always approach the Gods directly, the Agathoi Diamones are seen to be helpful intermediaries between the Gods and man.

The second day of every Athenian month was also a sacred day, devoted to the Agathos Daimon (good spirit). The name daimon does not mean the evil demon of modern Christianity, (although it did have a negative form, called the kakodaimon), but was thought to be an aspect of Zeus, as Zeus Ktesios, Charitodotes, and Epikarpios, titles as giver of increase and joy.

Agathos Daimon is most often represented in the form of a snake, a symbol of healing. However the daimon is also a function of one’s being, a characteristic inherently neither good nor bad. The philosopher Sokratēs talks of his own daimon as a small voice which speaks to him and warns him to refrain from certain actions. 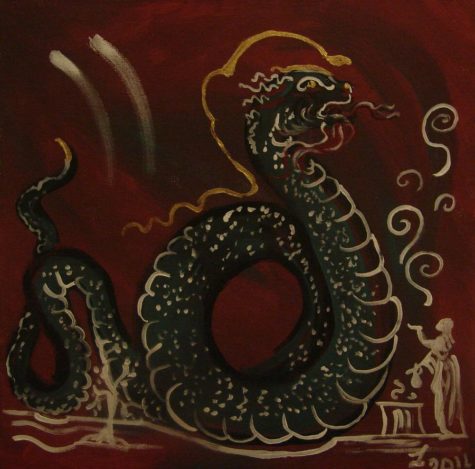 Hence, one prays for a good daimon, an eudaimon, and goodness from the gods for the coming month and also for the favor of father Zeus as Agathos Daimon.

Many modern Hellenes follow the practice of pouring a libation to their own Agathos Daimon on the second day of the lunar month. Possible prayers include the Orphic Hymn to the Daimon.

Thee, mighty-ruling, Dæmon dread, I call, mild Zeus, life-giving, and the source of all:
Great Zeus, much-wandering, terrible and strong, to whom revenge and tortures dire belong.
Mankind from thee, in plenteous wealth abound, when in their dwellings joyful thou art found;
Or pass through life afflicted and distressed, the needful means of bliss by thee suppressed.
‘Tis thine alone endowed with boundless might, to keep the keys of sorrow and delight.
O holy, blessed father, hear my prayer, disperse the seeds of life-consuming care;
With favoring mind the sacred rites attend, and grant my days a glorious, blessed end.

Aeschylus in the Suppliant Maidens says: “May Zeus grant that it go well with us. For Zeus’ desire is hard to trace: it shines everywhere, even in gloom, together with fortune obscure to mortal men.” Kleanthēs prays: “Lead me, O Zeus, and thou O Destiny” and also, “If so it pleases the Gods, so let it be.”

Agathos Daimon is also associated with Dionysos, especially with His gift of wine. A feast was often closed with a small drink of unmixed wine, called either Agathos Daimon or Zeus Soter (savior), as though supplicating the god that they may do nothing indecent or have too strong a desire for the drinking, and may receive from it all that is noble and salutary.

Also, whenever you see a snake, give a prayer to Agathos Daimon and even pour a libation. In Hellenistic and Roman times, family ritual areas were often decorated by snakes.

The serpent or snake is a symbol of May because of its ancient association with fertility. This association dates back to the earliest Pagan religions, and though later religions cropped up casting the serpent in a deceitful role, the Earth religions still honor the snake as a blessed creature this time of year. Its way of slithering along the body of the Earth made it an obvious phallic symbol, and May Day is full of such symbols (the maypole being the most well-known one). 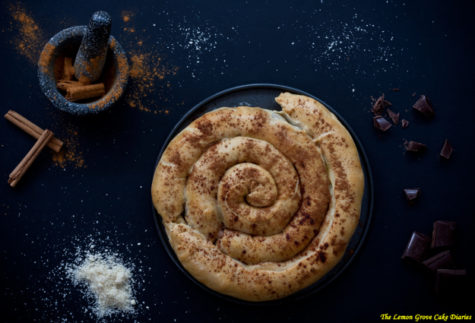 The holiday of Beltane comes on the first of May and encourages those who celebrate life to greet spring’s bounty with festivities, and that of course always involves food. This snake-shaped cake, incorporating appropriate seasonal ingredients, is a wonderful addition to a party table.

Preheat the oven to 400º F. Mix the sugar, spices, zest, soda, and salt into the flour in a bowl. Cut in the butter until little pebbles form. Pour in the honey, coffee, and liqueur, and mix in the egg. Mix the batter until everything is evenly distributed and you have a nice soft dough. Let it cool.

Turn it out onto a floured surface and divide in half. Roll one half into an 18-inch rope. Make a deep trough down the center and fill it with jam. Seal it by bringing the edges up over the jam and pressing the seam together. Then flip it seam-side-down onto a parchment-paper-covered baking sheet. Arrange the snake in a circle, but don’t press the ends together. Make one end tapered like the end of a snake’s tail, and make the other end triangular like a snake’s head.

Press in coffee beans for eyes and orange rind for scales if desired. Repeat this process with the other half of the dough and bake them for 30 minutes.

Posted in May, Seasonal Recipes | Tagged Beltane, May Day, Snakes | Leave a comment 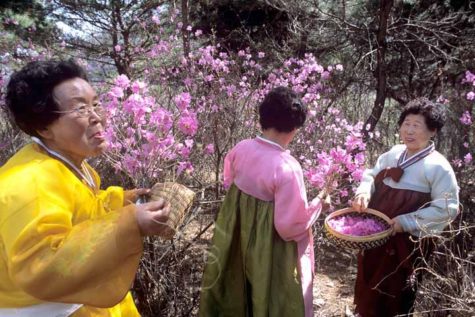 Samjinnal is a Korean holiday that falls on March 3 of the lunar calendar. Three being a positive number in numerology, this date containing two threes was considered to be highly auspicious. This festive day announces the arrival of spring. By this time, spring is usually in full bloom – the weather is warm, the young grass is a lively green, and the first flowers are blooming.

Note: Because this holiday is based on the lunar calendar, on Gregorian Calendars the date will vary from year to year. In 2016, this holiday was celebrated on April 9th, in 2017, this holiday falls on March 30.

It is known as the day the swallows came back from Gangnam and the day the snake came out from its winter sleep. It is also the day birds and butterflies start to appear.

Koreans believed that swallows left for their southward journey on ninth day of the ninth lunar month and returned back on Samjinnal. They started to repair their old nests under the eaves or built the new ones to hatch their young.

Many seasonal activities associated with spring took place on this day. Villagers headed out on a blossom tour of the nearby mountains as the gardens were increasingly frequented by butterflies, fresh-green buds became visible on tree branches and the hills and prairies put on their colorful spring dresses.

Popular picnic foods included flower petal pancakes and other seasonal delights. Banquets were also held around this time of year to treat senior members of the community to special meals. For the noblemen across the country, Samjinnal was a day of archery contests.

Flower petal pancakes for the blossom picnic were made with glutinous rice batter, formed in circles, fried in a pan with sesame oil and topped with azalea petals. A special dessert known as hwamyeon was prepared by putting slices of mung-bean dough cakes into omija (favor flavor berries)-scented water, and flavoring it with honey and pine nuts. When preparing the mung bean dough for this dessert, housewives sometimes added azalea petals to it. If they made the dough with honey and dyed it red, the dish would be called sumyeon.

Sumyeon was considered a ritualistic dish as it was frequently used for memorial services.One of the beliefs associated with Samjinnal is that seeing a white butterfly on that day was an ominous sign since white signifies mourning. The sighting of a white butterfly could result in a family member dying during the course of the year.

Tiger or yellow butterflies on the other hand were considered an excellent sign, and portended a lucky year. Women made sure they washed their hair on Samjinnal as they believed it would make their hair vigorous and beautiful throughout the year. Snakes that came out of their hibernation around that time were avoided at all costs since seeing these slithering creatures was regarded as unlucky.

Other names for this holiday:

Promote Your Page Too
Bread Crumbs
A trail of bread crumbs in case you lose your way wandering through this site ... Pagan Calendar > Blog Page > Snakes