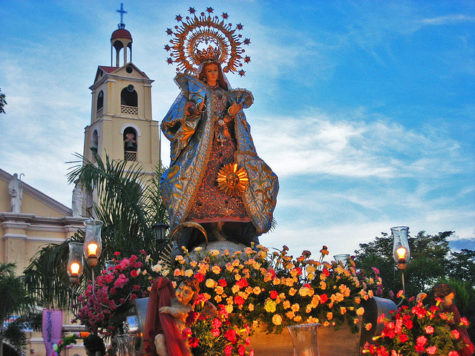 Flores de Mayo (Spanish for “flowers of May”) is a festival held in the Philippines in the month of May. It is one of the May devotions to the Blessed Virgin Mary and lasts for the entire month.

The Santacruzan (from the Spanish santa cruz, “holy cross”) is the ritual pageant held on the last day of the Flores de Mayo. It honors the finding of the True Cross by Helena of Constantinople (known as Reyna Elena) and Constantine the Great. Its connection with May stems from the old May 3 date of Roodmas, which Pope John XXIII abolished in 1960 in favour of the Feast of the Exaltation of the Cross on September 14

The Santacruzan Procession and Pageant 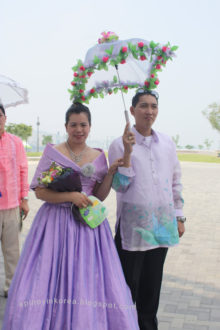 One of the most colorful aspects of this festival, the pageant depicts the finding of the True Cross by Queen Helena, mother of Constantine the Great. Many movie and television personalities participate in the events and are featured in major santacruzan. This festival became part of Filipino traditions identified with youth, love, and romance.

Prior to the Santacruzan, a novena is held in honor of the Holy Cross. The procession itself commemorates the search of the Holy Cross by Reyna Elena and her son, Emperor Constantine. It is said to have roots in the joyous thanksgiving celebrations that followed the finding of the Holy Cross in Jerusalem and its translation to Constantinople (now İstanbul).

The procession is accompanied by the steady beat of a local brass band, playing and singing the Dios te salve (the Spanish version of the Hail Mary). Devotees hold lighted candles and sing the prayer as they walk. It is customary for males participating in the Santacruzan to wear the traditional Barong Tagalog and that the females wear any Filipiniana-inspired dress.

After the procession in some places, there is the pabítin game (in Cavite, it is called “agaw-bitin”) that serves as a culminating activity for the children. The pabítin is a square-shaped bamboo grille or frame to which goodies (candies, fruits, small trinkets, etc.) are tied with thin strings.

This grille in turn is tied to a long rope passed over a strong branch or pole some 2 metres above the ground. Children then gather under the frame as the it is slowly lowered, and they then jump as high as they could to grab the goodies while someone jerks it up and down repeatedly until all the prizes are gone.

Sometimes the palosebo (the local version of the greasy pole) is also played, where a tall bamboo pole is smeared with grease which participants must climb to get a small red banner or a bag with a prize, such as ₱500 or a higher amount.

For a Magickal Flores de Mayo 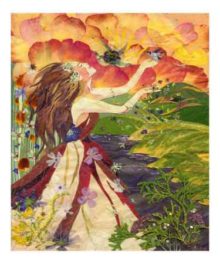 From 360 Goddess, we have a different version of, and way to celebrate the Flores de Mayo. This can be celebrated any time during the month of May, or on the last day, as a sort of magickal Santacruzan.

This Filipino goddess oversees the realms of orderliness, beauty, and love. Traditionally, she protects marriages against discord, but she may also be called upon to settle inner turmoil within your soul and restore self-love.

People in the Philippines say good-bye to May with bouquets, flower offerings, and an array of sweet foods to honor the month’s sweetness and beauty. Sometimes they ask Sisina to join the festivities by setting a place for her at the table.

This particular custom appears in several other cultures and it is a simple, lovely way of honoring the goddess. Just leave a plate with a fresh flower on your dinner table. This draws Sisina’s presence, love, and peaceful nature to your home and family relationships. If you wish, also leave an offering of sweet bread or fruity wine in a special spot to thank her.

As you go about your normal routine today, take time to enjoy any flowers you see, and be very considerate of the special people in your life. Sisina will see the effort and continue blessing those relationships with harmony.

Posted in May | Tagged Flowers, Parades, Phillipines | Leave a comment
Come fairies, take me out of this dull world...

Promote Your Page Too
Bread Crumbs
A trail of bread crumbs in case you lose your way wandering through this site ... Pagan Calendar > Blog Page > Phillipines