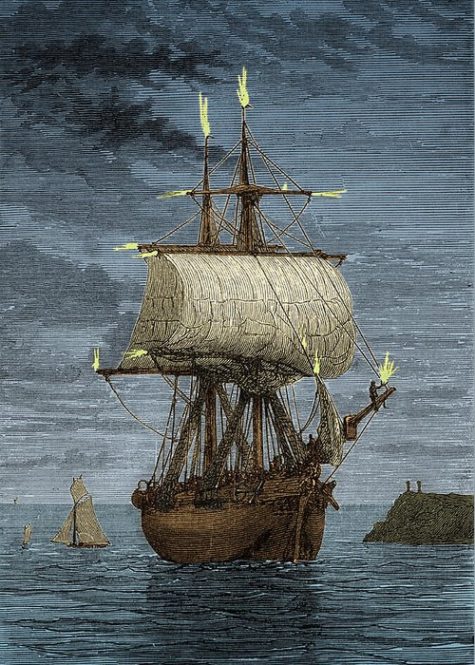 The 2nd of June is St Erasmus of Formia’s day – better known as St Elmo. He is said to have kept preaching during a thunderstorm and even when lightning struck near him. Sailors therefore look on the electrical discharges that hit masts or other protuberances as a sign that the saint is watching over them, and call this St Elmo’s Fire.

St. Elmo’s fire is a bright blue or violet glow, appearing like fire in some circumstances, from tall, sharply pointed structures such as lightning rods, masts, spires and chimneys, and on aircraft wings or nose cones. St. Elmo’s fire can also appear on leaves and grass, and even at the tips of cattle horns. Often accompanying the glow is a distinct hissing or buzzing sound. It is sometimes confused with ball lightning. 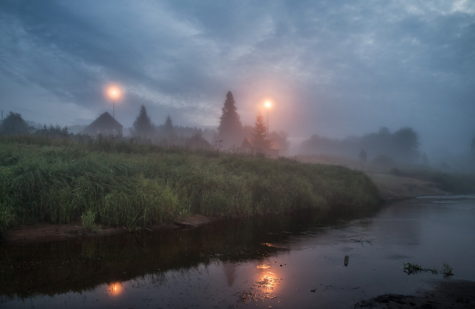 In addition to being the patron saint of sailors, Saint Erasmus is also the patron saint of a host of other groups, including explosives workers, ordnance workers, and women in labor. He is also invoked against colic, birth pains, intestinal disorders, stomach diseases, and storms. He is one of the Fourteen Holy Helpers, a group of saints regarded as special protectors against various illnesses.

Holy martyr Erasmus, who didst willingly and bravely bear the trials and sufferings of life, and by thy charity didst console many fellow-sufferers; I implore thee to remember me in my needs and to intercede for me with God. Staunch confessor of the Faith, victorious vanquisher of all tortures, pray Jesus for me and ask Him to grant me the grace to live and die in the Faith through which thou didst obtain the crown of glory. Amen.

Erasmus was Bishop of Formia, Italy. During the persecution against Christians under the emperors Diocletian (284-305) and Maximian Hercules (284-305), he left his diocese and went to Mount Libanus, where he hid for seven years. However, an angel is said to have appeared to him, and counseled him to return to his city.

On the way, he encountered some soldiers who questioned him. Erasmus admitted that he was a Christian and they brought him to trial at Antioch before the emperor Diocletian. After suffering terrible tortures, he was bound with chains and thrown into prison, but an angel appeared and helped him escape.

He passed through Lycia, where he raised up the son of an illustrious citizen. This resulted in a number of baptisms, which drew the attention of the Western Roman Emperor Maximian who, according to Voragine, was “much worse than was Diocletian.” Maximian ordered his arrest and Erasmus continued to confess his faith. They forced him to go to a temple of the idol, but along the saint’s route all the idols fell and were destroyed, and from the temple there came fire which fell upon many of the pagans.

That made the emperor so angry he had Erasmus enclosed in a barrel full of protruding spikes, and the barrel was rolled down a hill. But an angel healed him. Further tortures ensued.

When he was recaptured, he was brought before the emperor and beaten and whipped, then coated with pitch and set alight (as Christians had been in Nero’s games), and still he survived. Thrown into prison with the intention of letting him die of starvation, St Erasmus managed to escape.

He was recaptured and tortured some more in the Roman province of Illyricum, after boldly preaching and converting numerous pagans to Christianity. Finally, according to this version of his death, his stomach was slit open and his intestines wound around a windlass. This version may have developed from interpreting an icon that showed him with a windlass, signifying his patronage of sailors.

Promote Your Page Too
Bread Crumbs
A trail of bread crumbs in case you lose your way wandering through this site ... Pagan Calendar > Blog Page > 2019 > June > 02