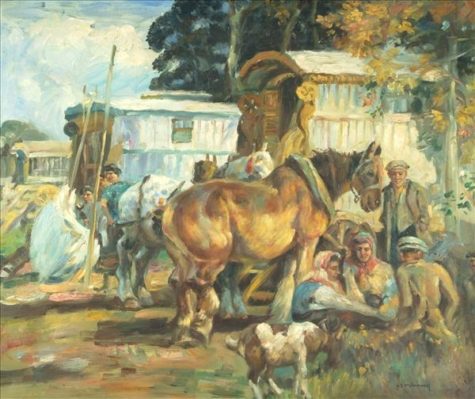 Diet was a very important part, not only of health, but also of beauty for the Romanies. Much of the malaise and depression around today stems from a sluggish system. Walking and fresh air help to combat this, but the best way to keep your system clear is to stick to a careful, sensible diet. Eat fruit, plenty of vegetables, salads, stewed prunes occasionally, take butter milk or malted milk. Eat sparingly of rice, pastry, pasta and sweets.

It is a fact that the true Romany only begins to grow old at around the eightieth year. What secrets enable them to keep their youth?

One of them – and this will disappoint meat lovers – is that they do not eat a lot of meat which is not, as is often thought, an essential part of the daily diet. On some days Romanies would make do with nuts, herbs and vegetables and avoid meat altogether, it does the stomach good to have a rest from it.

Eat plenty of cheese – it is full of protein to build strong teeth and bones and to keep the muscles firm. And there is a miracle of nourishment in an egg yolk – vitamins A,D,E,B1,B6, riboflavin, iron and calcium. Milk is also a valuable source of protein, fat and carbohydrate and you get essential vitamins from butter and margarine- butter provides calcium as well. There are foods that, even for the determined slimmers, should always be included in the diet. It can be dangerous to cut out starch completely. Wholewheat bread, for instance, contains calcium, iron, vitamins B1, B6 and E, riboflavin and nicotinic acid. Oatmeal is also a valuable source of these.

Potatoes were always part of the Romany staple diet, usually eaten the healthy way, baked in their jackets in the ashes of a fire. If you are boiling potatoes, don’t peel them, but just scrub the skin. Many minerals that we especially need are directly under the potato`s skin and are completely lost when they are peeled and then boiled.

Leprosy, scurvy and other skin diseases were rife in Britain before the introduction of the potato in 1563. Their useful citric content, together with salts of potash and sulfur, make them very valuable – they also help to keep the skin and hair healthy. Grated raw potato is very good for you, and if you don’t fancy the taste it can easily be disguised in a varied salad.

Another very valuable vegetable is the onion. 2,000 years before Christ, the onion was looked upon as an object of great value. And when the Pyramids were being built, tons of gold were spent buying onions for the workmen and slaves. Did you know that if a cut onion is left lying around it is said to draw all kinds of germs to it? For this reason no Romany woman would use an onion for cooking if it had been cut and left exposed to the air. This theory can easily be accepted by those who have painted a room and removed the smell of paint completely by placing a cut onion in it. The Romanies used a great many onions. They knew they contain free uncrystallized sugar, starch, alkaline, salts, sulfur and many other valuable food substances.

Turnips are very nutritious, but not recommended if you have a weak digestion as they can cause wind and distention of the stomach – expectant mothers should not eat turnips. However turnip tops, cleaned and boiled, are more digestible, marvelous for cleaning the blood and work miracles on the complexion.

Parsnip is a very beneficial vegetable and delicious if mashed with pepper and butter after boiling. Celery, which is particularly good for rheumatism, contains many nourishing salts and a great deal of organic sulfur. Stewed celery was a very frequent dish of the Romanies, it should be served moistened with a little of the water in which it was stewed in.

Watercress is also valuable, especially if gathered wild. It contains iodine, potash, sulfur, phosphatic salts and is so rich in anti-scorbutic salts that it is one of the most valuable foods for keeping the blood healthy. Eat watercress raw as often as you can, and also raw spinach and oranges, which also have a high content of iron and sulfur. They clean out your inside as if it had had a good bath and supply plenty of vitamins. The peel of citrus fruits is often richer in vitamin C than the flesh, that is why marmalade is good for you. Whenever possible add the grated rind of citrus fruit to recipes.

Radishes are another valuable vegetable, they are good for purifying the blood. The Romanies used to boil radishes and eat them as a vegetable. They should be boiled rather slowly in salted water for an hour, but do not eat radishes if you have a poor digestion. You can add the leaves to salads. You should eat a salad daily as it is the perfect health meal. If you make a salad with celery, tomatoes and radishes, you will be giving yourself a natural antiseptic protection from infection. It has a tonic effect too, as it eases nervous exhaustion, sinus congestion and catarrh.

Another tonic salad which is particularly beneficial if you eat it when you have a cold is made from grated raw carrot, young dandelion leaves and lettuce. Don`t discard the green outer leaves of lettuces or other vegetables- they contain more vitamin A than the pale ones. Lettuce has been eaten for hundreds of years. It was cultivated by the ancient Egyptians and in China. In biblical times lettuce was a sacred plant used by the Hebrews in the Passover ritual and in Rome it was brought into favor by Antonius Musa, physician to the Emperor Augustus, who prescribed it as a health food. It was usually eaten as a dessert, but Emperor Dominitian changed all that- he innovated the salad dressing and lettuce became an hors d`oeuvre! If using a lettuce with a dressing, make this of lemon juice and olive oil which is more beneficial than other dressings.

Chicory leaves can be used in your salad. The roots of chicory can be dried and ground and mixed with coffee to give it an unusual, slightly bitter flavor. You can also boil chicory and use it as a vegetable. This way it is also very tasty and health giving, in fact it is helpful for gout and rheumatic complaints. Mushrooms are the Romany’s great friends. They contain nicotinic acid and riboflavin and are very good for the blood, never peel the mushrooms because this takes away the flavor and goodness.

Disclaimer: I cannot find the original source for this post. I did however find copies of this post in various places around the web.

Promote Your Page Too
Breadcrumbs
A trail of breadcrumbs in case you lose your way. Gypsy Magick and Lore > Blog Page > Beauty Secrets > The Gypsy Diet
Be Merry