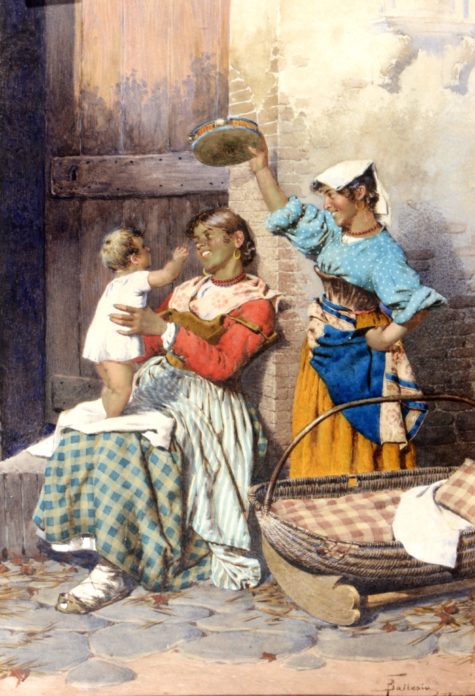 It is said that by throwing a small handful of salt on the family cooking fire every Monday morning, you will keep the family together and help heal any rifts.

Another belief is that to roll a wagon wheel in a great circle around the outside of the vardo once a month at the New Moon will ensure family togetherness. It should be rolled clockwise.

One Gypsy woman in Norfolk assured me that the only sure way to keep the family together is to take a small clipping from every member’s hair. These are then all placed together in a large leaf, which is rolled up and tied around with one of the mother’s hairs. The package is then buried at the foot of an oak tree. The type of leaf in which the hair is wrapped was not specified, but it probably should be oak.

Togetherness can similarly be ensured by taking nail clippings from all family members and burying them at the foot of a tree – in this case a hawthorn or elm.

To Bring About A Reunion 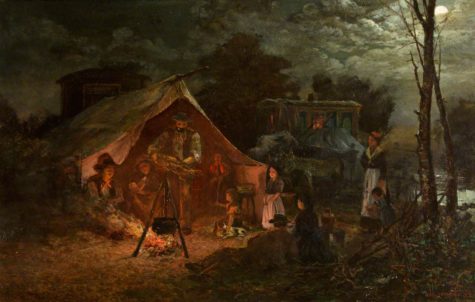 Romani families, or tribes, though wandering the country most of the year, would occasionally stop at a particularly favorite campground for two or three months at a time. Frequently this campground was a favorite of other branches of the tribe, and sometimes there was a grand reunion that took place when the different groups came together there.

Many Gypsies, especially the older ones, looked forward to these reunions, to again meeting with old friends and to sharing their stories, their adventures, their tales of sorrow and joy.

Here is a spell that was sometimes worked to bring about such a gathering, particularly if it had been a hard winter and support, comfort, and advice was needed. This magick is worked by the mother of the family when cooking a meal (usually hedgehog or rabbit stew) during the waxing of the Moon.

All potatoes to be used should be cut lengthwise, rather than crosswise, and thrown into the family cookpot along with a pinch each of allspice, thyme, and mace. Onion can be used but not garlic. Carrots, turnips and similar root crops should be plentifully included. Stir the cookpot only clockwise, and when moving around it, move only clockwise. The stirring spoon must be a wooden one, and the cookpot must be iron.

On the fire over which the cookpot hangs, throw handfuls of cedar chips; and at some time during the cooking, sprinkle onto the fire three spoonfuls of salt.

Any time the pot is stirred, it must be stirred in batches of three, for example: three, six, or nine clockwise stirs at a time. During these stirrings the mother will say:

Stir the pot and bring us round;
Rom are to the atching-tan bound.
Merry we’ll meet and merry we’ll part
And merry will be the company found. 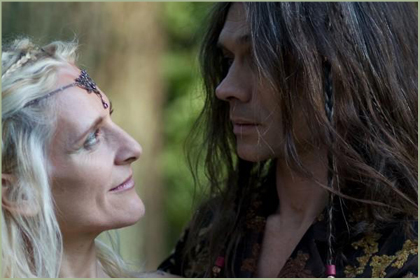 This little spell can be done for two lovers, for all family members, or for any two or more individuals. Many Gypsies use it when, for example, there is a rift between mother and daughter or an argument between husband and wife.

Cut a lock of hair from the head of each person concerned. This should be cut during the waxing phase of the Moon (growing from new to full). Put the two locks of hair together and tie them with a red silken thread. The thread should be wound around the hair at least seven times before it is tied. Wrap the tied hair in a small square of white silk and then bury it at a crossroads (it doesn’t have to be buried right in the center of the crossed roads; alongside the cross is fine). 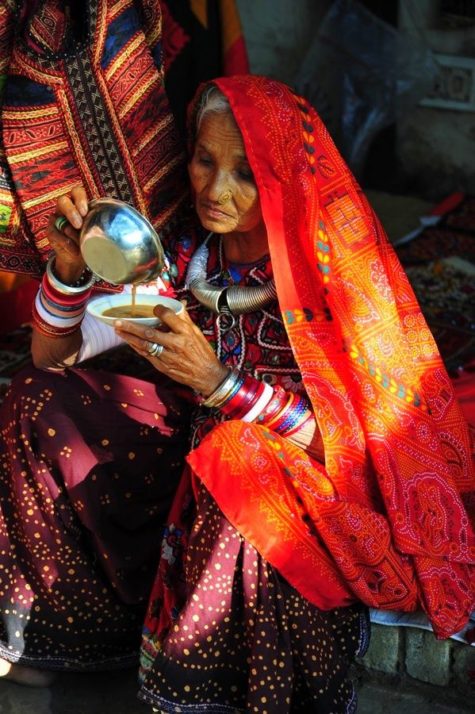 Prepare a pot of tea (size depending upon the size of the family, as you will see) made from valerian root herb (Valeriana officinalis).

The cut and sifted form of the herb is most useful, since it can be easily strained through a regular tea strainer. Dried herbs can be used, but fresh herbs are better. Use about an ounce of herb to a pint of water. The herb should be broken up in a pestle and mortar to release the active principles. Since valerian is one of the deeper essences, you may need to simmer the tea for about an hour, after which time about half the water will have evaporated. Incidentally, do not use an aluminum vessel. Use glass (Pyres), earthenware, enamel, or stainless steel.

When ready, pour into a teapot and top up with hot water. Then with everyone sitting in a circle, the mother should pour a cup of tea for each family member; but make sure that at least half the tea is left in the pot (this is where the size of the pot comes in). All drink their tea. Then take what remains in the teapot and sprinkle a little of the tea in every corner of every room in the house; in the corners of the rooms and alcoves, and in the corners of all the larger closets (such as clothes closets and pantries).

When this has been done, all the family members should stand in the kitchen with hands joined, and the mother, or eldest female, should say:

Peace be unto this house
And peace be with all who dwell herein.
Let harmony be forever here,
And let love abound. 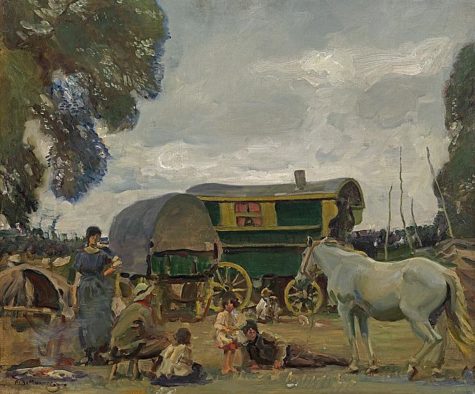 Manfri Frederick Wood, a founding member of the Gypsy Council, and for many years its president, said that he had never met a Gypsy who had a hobby. The reason was that life itself is a hobby to the Rom. They believe in living life to its fullest, and in trying to take an intelligent interest in every job they do, they find there is no need to do anything just to “kill time.” As Wood says:

A Gaujo will go out for a walk or a drive merely for the sake of walking or driving – but a Gypsy won’t; he must have some reason for doing so; he is studying the lay of the land or the movements of the gamekeeper, or the habits of the game in the locality; or he is advertising the fact that he is in the area, where he is known and has a reputation for doing this, that, or the other job…

Even when he does appear to be at play – for instance singing and dancing, gambling, or doing a chop – it is with a view to something extra in the pocket.

The same holds true jfor the whole family. Even the children seldom play, in the strict sense of the word. They work along with the rest of the family. They may do basket work, peg-making, artificial flower making, wood carving or metal work; they may work with animals, or do dyeing, hedging, ditching, or perhaps dukkering (fortunetelling).

The family works as a unit. Boys will help their fathers with the horses and, from a very early age, will learn how to make deals. Girls similarly learn domestic chores from their mothers and also how to tell fortunes and work simple magick. There is a special closeness in a Romani family not found anywhere else.