The Book of Wisdom of the Egyptians

Found in “Romano Lavo-Lil,” a book by George Borrow written in 1841. The Book of Wisdom of the Egyptians is not really a book of wisdom. It is, instead, a wonderful collection of sayings, old stories, anecdotes, and explanations. Here it is. Enjoy! 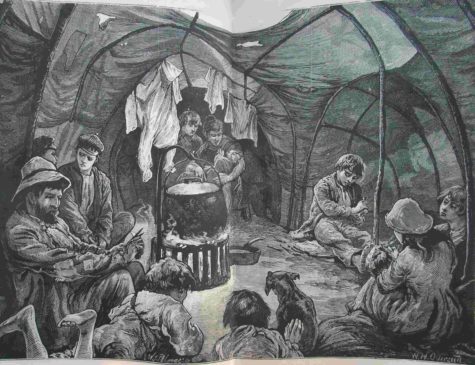 The young people often ask: What good is there in the Romany tongue? I answers: Ye are all fools! There is plenty, plenty of good in it, and plenty, plenty of our people would have been transported or hung, but for the old, poor Roman language.

A word in Romany said in time to a little girl, and carried to the camp, has caused a great purse of money and other things, which had been stolen, to be stowed underground; so that when the constables came they could find nothing, and had not only to let the Gypsy they had taken up go his way, but also to beg his pardon.

His term of transportation has now expired, and it were but right in him to come home, if it were only to take care of his poor old wife: she has been a true, true wife to him, and I don’t believe that she has taken up with another man ever since he was sent across.

When one’s pitched up one’s little tent, made one’s little fire before the door, and hung one’s kettle by the kettle-iron over it, one doesn’t like that an inspector or constable should come and say: What are you doing here? Take yourself off, you Gypsy dog.

On the first Friday of July, before the public-house called the Bald-faced Stag, on the hill above the town of the great tree in the Forest, you will see many Roman people, men and women, lads and lasses.

Do you know my old friend Mr. Stanniwix, the old gentleman that wears a pigtail, and made fourteen thousand pounds by smuggling?

He went on talking and talking foolishness till I said to him: If you goes on in that ‘ere way I’ll hit you a hot ‘un on the nose.

You ask me what are patrins. Patrin is the name of the signs by which the Gypsies who go before show the road they have taken to those who follow behind. We flings handfuls of grass down at the head of the road we takes, or we makes with the finger a cross-mark on the ground, we sticks up branches of trees by the side the hedge. But the true patrin is handfuls of leaves flung down; for patrin or patten in old Roman language means the leaf of a tree.

The true way to be a wise man is to hear, see, and bear in mind.

The man who has not the whip-hand of his tongue and his temper is not fit to go into company.

The Bill to take up the no-man’s lands (comons), and to make the poor people die of hunger and cold, has been flung out of the House of Commons.

The name they gives her is “Luck in a basket,” because she carries about a basket, which every night, when she goes home, is sure to be full of stolen property.

This here, brothers, is the title of a book, the head-work of an old king of Roumany land: the Tribunal, or the dispute between the wise man and the world: or, the death-sentence passed by the soul upon the body.

When the rope was about his neck they brought him his pardon, and let him go; but from that day he would wear a neck-kerchief no more, for he said it brought to his mind the rope about his neck.

Jack Cooper could read enough to know all that was upon the milestones and the sign-posts.

Roman way to cook a fowl is to do it up with its feathers in clay, and then to put it in fire for a little more than half an hour. When the clay and the burnt feathers are taken from the fowl, the belly cut open, and the inside flung out, ’tis a food good enough for a queen to eat without salt.

He told me once that when he was a chap of twenty he killed a Gentile, and buried the dead meat under ground. He was taken up for the murder, but as no one could find the cold meat, the justices let him go. He said that the job did not sit heavy upon his mind for a long time, but then all of a sudden he became sad, and afraid of the dead Gentile’s ghost; and that often of a night, as he was coming half-drunk from the public-house by himself, he would look over his right shoulder and over his left shoulder, to know if the dead man’s ghost was not coming behind to lay hold of him.

Do you know the Gypsy way of taking the hand?
Aye, aye, brother.
Show it to me.
They does it so, brother.

A tramp has more fun than a Gypsy.

You have heard the word pazorrus. That is what is called by the Gentiles “trusted,” or in debt. In the old time the Roman who got from his brother money or other things on trust, and did not pay him again, could be made to work for him as horse, ass, or wood cutter for a year and a day. At present the matter is not so. If a Roman got money, or other things, from my hand on credit, and did not repay me, how could I make him labour for me as horse, ass, or stick-cutter for one day, not to say for a year?

Do you call this a fair? A very pretty fair is this: you might put it all into your pocket.

Where are you living?
Mine is not living; mine is staying, to say the best of it; I am a traveller, brother!

All farmers are fools. When they hear a citizen in the country say: That’s a fine horse! they say: ‘Tis no horse, ’tis a mare; whether the thing’s a horse or not. The simpletons don’t know that a mare’s a horse, though a horse is not a mare.

No one like Gypsy Will’s wife for dancing in a platter.

When Constance Smith died, she was a hundred ten years old.

Do you know Mrs. Cooper?
I knows her very well, brother.
Do you like her?
I loves her very much, brother; and I have often, often said to the other Gypsies, when they speaking ill of her: She’s a gentlewoman; takes care of all of you; if it were not for her, you would all go to the devil.
What does she do for a living?
She tells fortunes, brother; she tells fortunes.
Is she a good hand at fortune-telling?
There’s no Roman woman under the sun so good at fortune-telling as Mrs. Cooper; it is impossible not to have your fortune told by her; she’s a true witch; she takes people by the hand, and tells their fortunes, whether they will or no.

‘Tis no use to go seeking after Gypsies. When you wants to see them ’tis impossible to find one of them; but when you are thinking of other matters you see plenty, plenty of them.

I will swear neither falsely nor truly against any one; if they wishes to find out something, let them find it out themselves.

If he had been transported for a great robbery, I would have said nothing; but it makes me mad to think that he has been sent away, all along of a vile harlot, for the value of three-and-sixpence.

When he had committed the murder he made haste, and ran into the wood, where he hid himself in the hollow of a great old tree; but it was no use at all; the runners followed his track all along the forest till they came to the tree.
How many fortunes have you told to-day?

Only one lady’s, brother; yonder she’s coming back; I knows her by the black lace on her gown.
How much money did she give you?
Only one groat, brother; only one groat. May the devil run away with her bodily!

Hear the words of wisdom which Mike the Grecian said to Mrs. Trullifer: Mrs. Trollopr, you must live by your living; and if you have a pound you must spend it.

Can you speak Romany?
Aye, aye, brother!
What is
Weshenjuggalslomomengreskeytemskeytudlogueri?
I don’t know what you say, brother.
Then you are no master of Romany.

Ask any yes or no question, and Auntie Moss be givin' you an answer. The old witch woman is wiser than you think. Go ahead, give it a go.