Below you will find an excerpt from a book on Gypsy Magic by Patrinella Cooper, where she talks about the Romany Tradition, and where Gypsies come from. 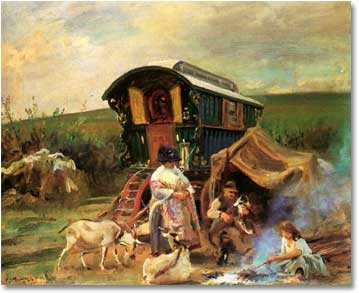 You may be forgiven for thinking that the Romany people are fire worshipers. Fire draws them like a magnet. Even in these days of push-button entertainment, there is something special about sitting round a good old ‘yog‘ fire, the smoke-blackened kettle singing away on the kettle iron, ready to make endless cups of strong tea always required on these occasions.

The talk around the fire is wide-ranging: the incidents of the day, deals struck, horses good and bad, people met with, the exploits of the clever lurcher dogs, each tale more unlikely than the last, all the success and failures of the travelling life, punctuated by snorts of laughter, or expressions of sympathy. But when the logs settle lower in a shower of sparks, and the fire reflects a gentle glow on more thoughtful faces, it is not unusual for the talk to turn to the old question: just where do Gypsies come from?

The travelers themselves have several ideas on the subject. The more educated subscribe to the current theory that we arrived from India in medieval times. Some propose that we came from the lost continent of Atlantis, bringing great knowledge of healing and magic that has gradually been lost through the centuries of persecution, till only remnants remain. Some say that we came from Egypt, hence the name Gypsy, the last of the priestly caste of the old Egyptian religion, forced out by the New Order. Others firmly believe that we are descended from American Indians, and it is true that if you compare old photographs of the two peoples it is hard to tell which is which.

I can remember my own grandfather declaring that we came over the western sea to trade horses. But when it is all thrashed out, the general opinion among travelers is that all over the world, from the beginning of time, there have always been travelers. Some will always say, ” We are the first people God made, we’ve always been here, and we always will be, in spite of what the Gorga do to us.”

I myself am of the latter opinion. It is likely that early man was nomadic, following the herds of migrating animals and the seasonal fruits. When the general population settled down to build villages and raise crops, there would still be groups of wanderers making a living in the old way, travelling from place to place: traders, peddlers in all kinds of goods, the smith with his mysterious knowledge of working metal, making tools and weaponry, entertainers bringing a little light relief into hard lives, bards, shamans, fortune-tellers, healers. These people would band together for company and safety. They would intermarry, and in time form distinctive tribes.

According to the television archaeology magazine Down to Earth, a Continental archaeologist has found a DNA link between present-day European Gypsies and ancient tribes of blacksmiths and entertainers, who she believes lived outcast from mainstream society. I know the much publicized, historically documented band came from India in the Middle Ages, but I believe that it was only one of the many tribes worldwide, and that these people must have intermarried with tribes that were already established in Britain before the Dark Ages.

The travelers for their part would grow to look with scorn at the settled people for their lack of knowledge, their fear of strange roads and deep forests. While the travelers lived in the open, sheltering only in tents, the villagers huddled in their groups of small huts becoming estranged from nature, growing afraid of the dark night. The travelling people developed their own laws, customs and taboos, many of which, based on strict laws of hygiene, are still adhered to by Gypsies today. These codes were based on observation, common sense and the need to avoid danger and disease on the road. In this way a gulf developed between the two peoples that has remained through the centuries. This is how I believe the Gypsy people were born.

Ask any yes or no question, and Auntie Moss be givin' you an answer. The old witch woman is wiser than you think. Go ahead, give it a go.