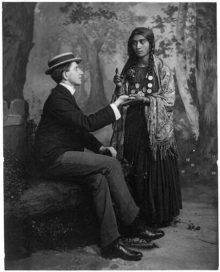 Gypsy women, as long as we have known anything of Gypsy history, have been arrant fortune-tellers. They plied fortune-telling about France and Germany as early as 1414, the year when the dusky bands were first observed in Europe, and they have never relinquished the practice. There are two words for fortune-telling in Gypsy, bocht and dukkering. Bocht is a Persian word, a modification of, or connected with, the Sanscrit bagya, which signifies ‘fate.’ Dukkering is the modification of a Wallaco-Sclavonian word signifying something spiritual or ghostly. In Eastern European Gypsy, the Holy Ghost is called Swentuno Ducos.

Gypsy fortune-telling is much the same everywhere, much the same in Russia as it is in Spain and in England. Everywhere there are three styles – the lofty, the familiar, and the homely; and every Gypsy woman is mistress of all three and uses each according to the rank of the person whose vast she dukkers, whose hand she reads, and adapts the luck she promises.

There is a ballad of some antiquity in the Spanish language about the Buena Ventura, a few stanzas of which translated will convey a tolerable idea of the first of these styles to the reader, who will probably with no great reluctance dispense with any illustrations of the other two:

Late rather one morning
In summer’s sweet tide,
Goes forth to the Prado
Jacinta the bride:

There meets her a Gypsy
So fluent of talk,
And jauntily dressed,
On the principal walk.

“O welcome, thrice welcome,
Of beauty thou flower!
Believe me, believe me,
Thou com’st in good hour.”

Surprised was Jacinta;
She fain would have fled;
But the Gypsy to cheer her

“O cheek like the rose-leaf!
O lady high-born!
Turn thine eyes on thy servant,
But ah, not in scorn.

“O pride of the Prado!
O joy of our clime!
Thou twice shalt be married,
And happily each time.

“Of two noble sons Thou shalt be the glad mother,
One a Lord Judge,
A Field-Marshal the other.”

Gypsy females have told fortunes to higher people than the young Countess Jacinta: Modor – of the Gypsy quire of Moscow – told the fortune of Ekatarina, Empress of all the Russias. The writer does not know what the Ziganka told that exalted personage, but it appears that she gave perfect satisfaction to the Empress, who not only presented her with a diamond ring – a Russian diamond ring is not generally of much value – but also her hand to kiss.

The writer’s old friend, Pepíta, the Gitana of Madrid, told the bahi of Christina, the Regentess of Spain, in which she assured her that she would marry the son of the King of France, and received from the fair Italian a golden ounce, the most magnificent of coins, a guerdon which she richly merited, for she nearly hit the mark, for though Christina did not marry the son of the King of France, her second daughter was married to a son of the King of France, the Duke of M-, one of the three claimants of the crown of Spain, and the best of the lot; and Britannia, the Caumli, told the good luck to the Regent George on Newmarket Heath, and received ‘foive guineas’ and a hearty smack from him who eventually became George the Fourth – no bad fellow by the by, either as regent or king, though as much abused as Pontius Pilate, whom he much resembled in one point, unwillingness to take life – the sonkaypè or gold-gift being, no doubt, more acceptable than the choomapé or kiss-gift to the Beltenebrosa, who, if a certain song be true, had no respect for gorgios, however much she liked their money:

Britannia is my nav;
I am a Kaulo Camlo;
The gorgios pen I be
A bori chovahaunie;
And tatchipen they pens,
The dinneleskie gorgies,
For mande chovahans
The luvvu from their putsies.
Britannia is my name;
I am a swarthy Lovel;
The Gorgios say I be
A witch of wondrous power;
And faith they speak the truth,
The silly, foolish fellows,
For often I bewitch
The money from their pockets.

Fortune-telling in all countries where the Gypsies are found is frequently the prelude to a kind of trick called in all Gypsy dialects by something more or less resembling the Sanscrit kuhana; for instance, it is called in Spain jojana, hokano, and in English hukni. It is practised in various ways, all very similar; the defrauding of some simple person of money or property being the object in view. Females are generally the victims of the trick, especially those of the middle class, who are more accessible to the poor woman than those of the upper. One of the ways, perhaps the most artful, will be found described in another chapter (What is The Hukni? and What is Cauring?)

Promote Your Page Too
Breadcrumbs
A trail of breadcrumbs in case you lose your way. Gypsy Magick and Lore > Blog Page > Gypsy Songs
Be Merry