The Role of Enzymes in Nutrition

Enzymes are chemical substances produced in the living organism. They are marvelous organic catalysts which are essential to life as they control all the chemical reactions that take place in a living system. Enzymes are part of all living cells, including those of plants and animals. The term enzyme, which literally means in yeast’, was coined following the demonstration of catalytic properties of yeast and yeast juices.

Although enzymes are produced in the living cell, they are not dependent upon the vital processes of the cell and work outside the cell. Certain enzymes of yeast, for instance, when expressed from the yeast cells are capable of exerting their usual effect, that is, the conversion of sugar to alcohol.

A striking feature of enzymes is that while they enter into chemical reaction, they remain intact in the process. They however, act with maximum efficiency at a certain temperature. Lowering the temperature below or raising it above this level slows the reaction. A high degree of heat, that is above 60 o C, permanently destroys their action.

It has been estimated that there are over 20,000 enzymes in the human body. This estimate is based on the number of bodily processes that seem to require action. However, so far only about 1,000 enzymes have been identified. But their great role in nutrition and other living processes has been firmly established.

They are protein molecules made up of chains of amino acids. They play a vital role and work more efficiently than any reagent concocted by chemists. Thus for instance, a chemist can separate proteins into their component amino acids by boiling them at 166 o C for over 18 hours in a strong solution of hydrochloric acid, but the enzymes of the small intestines can do so in less than three hours at body temperature in a neutral medium.

A feature which distinguishes enzymes from inorganic catalysts is that they are absolutely specific in their actions. This means that a particular enzyme can cause reactions involving only a particular type of substance or a group of closely related substances. The substance on which the enzyme acts is known as “substrate”. The specificity of an enzyme is, however, related to the formation of the enzyme-substrate complex which requires that the appropriate groupings of both substrate and enzyme should be in correct relative position. The substrate must fit the enzyme like a key fits its lock. 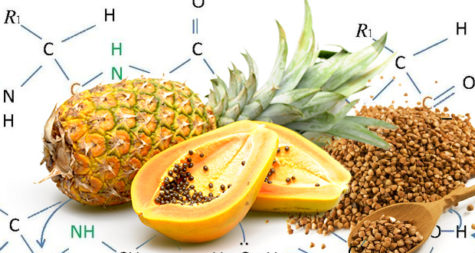 There are, however, several enzymes which act upon many substances in different ways. These enzymes are named by their functions rather than substrates. Thus, an enzyme which causes deaminations is called a deaminase and oxidizing enzyme an oxidase.

Some enzymes work efficiently only if some other specific substance is present in addition to substrate. This other substance is known as an “activator” or a “con-enzyme” . “Acti- vators” are usually inorganic ions. They increase the activity of a complete enzyme and may take part in the formation of the enzyme-substrate complex.

Many of the con-enzymes are related to vitamins. This explains why vitamin deficiencies profoundly alter metabolism. Thus, for instance, thiamine, as thiamine pyrophosphate, functions as a con-enzyme in at least 14 enzymes systems. Con-enzymes, like enzymes, are being continuously regenerated in the cells.

Enzymes play a decisive role in the digestion of food as they are responsible for the chemical changes which the food undergoes during digestion. The chemical changes comprise the breaking up of the large molecules of carbohydrates, fats and proteins into smaller ones or conversion of complex substances into simple ones which can be absorbed by the intestines. They also control the numerous reactions by which these simple substances are utilized in the body for building up new tissues and producing energy.

The enzymes themselves are not broken down or changed in the process. They remain as powerful at the end of a reaction as they were at the beginning. Moreover, very small amounts can convert large amounts of material. They are thus true catalysts.

The process of digestion begins in the mouth. The saliva in the moth, besides helping to masticate the food, carries an enzyme called ptyalin which begins the chemical action of digestion. It initiates the catabolism (breakdown) of carbohydrates by converting starches into simple sugars. This explains the need for thorough mastication of starchy food in the mouth. If this is not done the ptyalin cannot carry out its functions as it is active in an alkaline, neutral or slightly acid medium and is inactivated by the highly acid gastric juices in the stomach.

Although enzymatic action starts while food is being chewed, digestion moves into high gear only when the chewed food has passed the esophagus and reached the stomach. While the physical action of peristalsis churns and kneads solid food into a semi-solid amorphous mixture called chyme, this mixture undergoes chemical changes initiated by gastric juices secreted by the walls of the stomach. These juices include mucus for lubricating the stomach, hydrochloric acid and gastric juice.

The enzyme or active principle of the gastric juice is pepsin. This enzyme in combination with hydrochloric acid starts the breakdown of proteins into absorbable amino acids called polypeptides. An additional enzyme, rennin, plays an important role in the stomach of the infant. It curdles milk and allows the pepsin to work upon it. The gastric juice has no effect upon starches or fats. When the chyme leaves the stomach and enters the small intestine through the pylorus – the lower escape valve, it still contains much food which is in the form of raw material not yet ready for absorption in the body.

Digestion is completed inside the small intestine by several juices. From liver comes a liquid called bile which converts fat globules into a smooth emulsion. The pancreas contributes various enzymes which continue the breakdown of proteins, help to divide starch into sugars and work with bile in digesting fats. The small intestine itself secretes enzymes from its inner wall to complete the reactions.

When all the enzymes have done their work, the food is digested and rendered fit for absorption by the system.The following table briefly summarizes the chemical digestion of carbohydrates, fats and proteins by various enzymes: 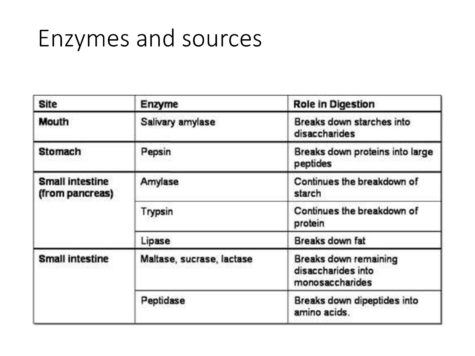 Enzymes form part of the food we eat. Raw foods contain enzymes in abundance; cooking, pasteurizing, pickling, smoking and other processing denature enzymes. It is, therefore, essential to include in our diet, substantial amount of raw foods in the form of fruits, raw salads and sprouts. Studies have revealed that the body without sufficient raw materials from raw foods, may tire and produce fewer enzymes year after year. This may lead to wearing out of body processes and consequent worn-out looks.

Bread Crumbs
A trail of bread crumbs in case you lose your way exploring Eating To Live ... Eating To Live > New > Naturopathic Medicine > The Role of Enzymes in Nutrition
Visitors