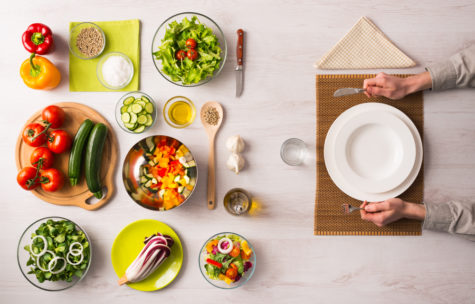 The observance of rules of food combining is neither faddish nor eccentric. It is a simple, scientifically -based system of selecting foods, from among different types, which are compatible. This facilitates easy and efficient digestion and ensures after-meal comfort. Digestion is not merely chemical or physical process, but also a physiological one.

When food enters the body, it undergoes several changes before it is broken down into its constituent parts and assimilated. But no food can be assimilated by the system and used by various organs unless it has first been digested and then absorbed in the digestive system known as alimentary canal, while the residue, unfit for absorption is eliminated from the system.

The chemical part of digestion is accomplished by a series of juices and their enzymes. The juices alternate between alkalies and acids, and their character is determined by the requirement of the enzymes they contain. These enzymes remain active in suitable media of well defined acid-alkaline ranges and are destroyed in unsuitable media.

A noteworthy feature of the digestive secretions is that the body suits its fluid and enzymes to the character of the food eaten. There are, however, severe limitations in this process. It is possible to suit the juices to a particular food, however, complex it may be, but not to a variety of foods taken together. It is the combining of many varieties and incompatible foods at a meal that causes 90 per cent of digestive disorders.

There is a marked tendency to gastro-intestinal fermentation with certain combinations of foods. There is no fermentation and digestion will be much more satisfactory when the foods comprising a meal are of the same type. This generally means eating similar foods at one time in order to accomplish the most complete digestion.

The most important rule for combining foods is to avoid mixing protein and carbohydrate concentrated foods. Although every food contains some protein, those regarded as protein concentrated foods demand the longest digestive time. They are held in the stomach for some hours until the gastric juices has performed its task. This may vary from two-and-a-half to six hours, depending upon the complexity of the protein in the food.

If a protein food is mixed with starch-concentrated or sugar-concentrated foods, it will usually result in fermentation. This may lead to indigestion and gas in the stomach. Animal-food proteins, such as meats, fish and cheese, require very high concentration of hydrochloric acid. Their gastric digestion will be greatly inhibited by carbohydrate fermentation in the stomach. This will produce more gas and increased discomfort. Eating meat, potatoes, bread and sweets should, therefore, be especially avoided.

The second important rule for food combining is to avoid mixing proteins and fats at the same meal. Fat in foods inhibits the secretion of gastric juice through the small wall. Thus when fat-concentrated foods are taken with protein foods, gastric catabolism will decrease by the degree of liquid concentration in the stomach. Fat will remain undigested in the stomach until gastric juices complete their work on the complex protein molecule.

Although all primary protein foods contain high concentration of fat, such lipids will be held in suspension, awaiting catabolism in the intestine, without impeding gastric action. Free fats like oil, butter, and milk tend to coat the gastric mucoa, thereby inhibiting its effort to secrete gastric juice. Fat surrounding fried foods is also regarded as free fat and it interferes with gastric catabolism.

Another important rule for food combining is to avoid mixing carbohydrates and acid fruits in the same meal. The starch-splitting enzyme ptyalin in the saliva plays an important role as the food is chewed. It converts the complex starch molecules into simpler sugars. Ptyalin requires a neutral or slightly alkaline medium for proper functioning and this is the normal condition of the saliva in the mouth. However, when acid foods are taken, the action of ptyalin is halted.

It is, therefore, necessary to avoid acid fruits in the same meal as sweet fruits or starches. Thus tomatoes should not be eaten with starches especially potatoes or bread. Refined sugar products are also acidic, both in the mouth and in the bloodstream. The acidifying of the saliva by sucrose is one of the main causes of tooth decay. It can also cause severe damage to the digestion. Food combining is designed to facilitate easier digestion.

This in brief is the whole basis for successful food combination. An important point to remember about meals is that the smaller the number of courses they consist of, the better it will be. They should approximate to a one-course meal as much as possible. Simple meals in every way are more conducive to health, than more elaborate ones, no matter how well they may be combined.