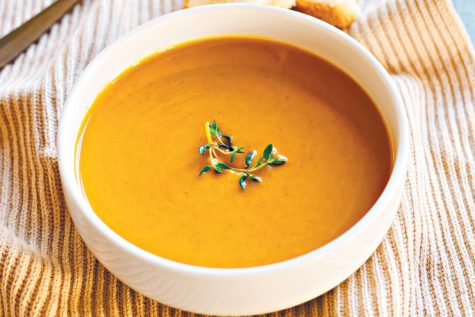 Cut the pumpkin open and remove seeds and the stringy portion of the interior. Cut the pumpkin into about one inch cubes. Slice the onion and saute for a couple of minutes, then add the pumpkin. Saute for about five minutes, stirring, and then add a cup of water, put on a lid, and let it simmer for forty o fifty minutes, until the pumpkin is quite tender.

At this point the pumpkin, or some portion of it, can be mashed to thicken the broth. Add some more water to the onion / pumpkin mixture to make it soupy. Heat and season with salt, cinnamon, and nutmeg, or any other herbs you might want to use for the seasoning.

The soup may be garnished with croutons, toasted pumpkin seeds, and or sour cream.

This recipe did not include any definitive amounts. I think this is because the sizes of pumpkins used may vary widely. I think you could just follow your own intuition, and season it to taste.