I found the following post while browsing the Magic Cafe Forums, and decided to share it here since I’ve been posting about bone divination. It’s informative and thought provoking. Enjoy! 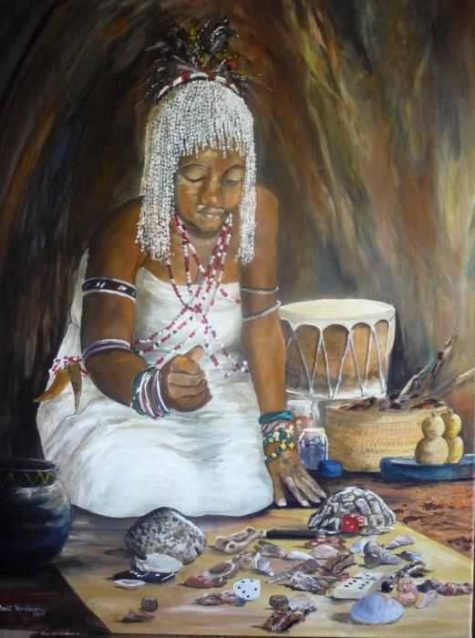 Diagnosis and divination with bones isn’t something you’re going to find a lot of written information about because the information is passed through ancestors and an oral, shamanic tradition.

A man by the name of David Cumes is a both a wonderful traditional healer and medical doctor, a past associate of mine and one of the other three Sangoma TDR’s here in the States. He wrote a wonderful book about his thwasa and initiations in the Zulu Mystery Traditions titled, Africa in my Bones that’s as good a resource as you’re going to find regarding the Zulu bone casting tradition and this ancient practice.

Personally I have mixed feelings about this. I would hate to see a magician collect a few bones, toss them with some cold reading lines and call it ‘Zulu.’ This is part of my spirituality, something I worked very hard and very long to honor, traveled half way around the world to learn more about, submerged myself into the Swazi and Zulu culture, learned their language, underwent their intense rituals, training, traditions and initiations to ‘qualify’ for the bones I use and to incorporate this ancient, powerful mouthpiece for the ancestors. It’s not a magic trick, it’s not a presentation to throw in a show and not something I take lightly or would like to see ***ized…not saying those are your intentions for studying such a thing, of course.

That said, I think it’s very important to draw attention and interest to these traditions, rites and customs in the interests of cultural preservation and keeping the world’s shamanic traditions and root spirituality intact. Anytime someone is interested in learning more about the Bones and especially their use in the Zulu Sangoma tradition I’m more than happy to speak about it and would be honored to be of special assistance. To answer your question, while I think anyone could learn to use and interpret the bones I don’t think everyone should…

Does one have to be initiated or become a Sangoma to use the bones? No, not always. I’m not sure about other religions or traditions though. Many people feel pulled to this system and end up for extended stays in South Africa living on a Zulu homestead and being mentored specifically in the use of bones for diagnosis and divination without becoming a traditional doctor, Inyanga or Sangoma.

There’s a lot that goes into a Sangoma’s bone set. The animals are obtained through tradition, offered to the ancestors (their blood will be on your hands and in your stomach), consumed (all parts and portions, nothing spared), the proper bones obtained, washed, blessed and brought to life through ritual.

Each bone piece in the Sangoma’s set is hidden from them during thwasa to be found and located while in ecstatic trance and deep shamanic states. It’s up to the sensitivity of the thwasa and their guiding spirits that determines how fast the bones are found and incorporated. For some it might take 5 to 7 years before the proper tests are passed. I successfully located 28 of the 37 bone pieces in my own set. It was no easy task.

The bones are bonded to the healer/diviner and his helping spirits through drumming, rattling, singing, dancing, chanting and praying, ancestral offerings, ecstasy, muti rituals, blood letting and intense purification ceremonies. This is the norm whether the student goes on to become a Sangoma or not.

Day and night the student is mentored in the traditional meanings and interpretations which are also ancient, sacred to the Zulu’s and have remained largely unchanged throughout time. The bones are very simple objects and yet advanced and complex in their use – a single bone piece can have over a dozen different meanings depending on which side is showing, where it falls in the casting, its proximity to other bones, etc. As this information is imparted the student is an apprentice to his Mama and Baba whom he works for and pledges himself to for the remainder of his experience. A special bond is formed during thwasa between man, animal, earth and ancestor. The process itself is incredibly dynamic.

During the long periods of learning to work with the bones one is expected to work in a traditional clinic (mine was the Luvenga Traditional Clinic in Matsetsa) and to see clients for traditional healing and diagnosis/divination many days a week.

If NOT a traditional healer, the students of this special shamanic, ancestral wisdom and system of divination with bones is still required to practice and utilize what is learned during the teaching and integration process with dozens of people, clients and patients each day for months on end. Only this way is a level of proficiency attained – one isn’t going to pass the qualification ceremonies and initiatory process with cold reading lines or revised Tarot readings.

There would be mornings I would wake up (around 4:00 a.m.) and prepare for my daily rituals and purification ceremonies which happen EVERY DAY while learning to work with bones. I would receive hours of instruction with Baba Mntshali and Sipho Mamba, Miriam Mntshali and other elders before travelling by foot many miles to the clinic with my adoptive family and local healers to begin seeing patients for the day. Many days we would arrive with 50 or 60 people already waiting and I would work 14-16 hours a day – needless to say, I got a lot of practice working with my bones in the process. This is something that cannot be taught in a book or learned from a book.

If you’re considering Zulu specific divination ceremonies I would strongly advise doing what I did and preparing for Africa. There you can learn in the ancient fashion, according to tradition as part of a true shamanic lineage. It’s a lot of work, blood, sweat and tears (all of which will be added to your bones) and I can only say it was the most worthwhile and precious experience of my life. Anything less would be stealing from the culture, history, legacy and tradition of another. We’ve got to keep in mind the process exists for a reason and was never intended to be used for entertainment.

I hope this post doesn’t sound harsh or come across as condescending or disenchanting in any way…it might, though it’s not my intention. I would be more than happy to assist you in creating or finding a working alternative. I’m completely open to the possibility of one using bones in their readings, in an ethical and respectful manner and always by properly representing the bones and the traditions one claims is associated with them (and you), being honest and forthcoming about the ‘credentials’ claimed, etc. Not all bone casting is Zulu – as you said Santeria, Hoodoo and other mystery traditions, magickal systems, religions and spiritual paths incorporate them too.

Loren always does a great job with his products, but this is the first I’ve heard about it and I wish I didn’t. Obviously I feel very strongly about this practice and have my reasons for doing so. Divination with bones is something very spiritual and sacred to me in the deepest sense and I’m hesitant to think of what might happen to bones in the public eye after a bunch of magicians get ahold of them, treat them like another cool gimmick or toy and use them as an interesting premise for their recycled, canned readings and stock CR lines. There is a proper way to learn the bones and I refuse to believe it’s through an ebook or package from Mevpro, although I’ve no doubts that it will beat the alternative offerings mentalists and psychic entertainers currently have access to.

Regarding your own use and study of the bones in the Zulu or any other tradition, I’m 110% for it and as I said before, I would be happy to assist you in this regard. I guess what worries me most here (and something completely unfounded at this point and I’m likely just being protective and paranoid – again, no offense is intended – please know that!) is anyone who might wish to misrepresent themselves in this area or use questionable techniques in their presentations with such tools and oracles.

I’m also of the belief a non-cultural specific system for bone readings is warranted and if this is the way one wishes to go (and I’m sure now that I think about it is exactly what MevPro is doing) can be very effective and beautiful. If anyone wishes to explore some options in this area I will gift the right people with African lion bones for use in their divination and casting sets. I also know Scully Elly offered a beginning bone casting kit with weasel, chicken, snake and other bones. I’ve recommended this set for close friends who were serious about studying and applying a legitimate system for divination with bones.

My sincere apologies for this post coming across as a rant. I feel like I sound like a raving lunatic right now and if you could SEE me at this point I’m really being anything but that!

I want to help those who wish to work in this area to the best of my ability. The bones are not mine to control or dictate who uses them or what for or how. I do feel responsible to speak on this matter though because the Zulu systems and traditions were mentioned in the original post. I’d be happy to speak of this more via PM and will again recommend Dave Cumes book, ‘Africa in my Bones’ for those who wish a deeper ZULU SPECIFIC knowledge in this area.