This is not a creamy milk-based dessert pudding; instead, this is a traditional English dinner pudding. You’ll need about a loaf of stale bread, three eggs, a half cup of heavy cream, a quarter cup of brown sugar, and spices such as cinnamon, ground cloves, ground nutmeg, allspice, mace, and ginger. Pick two spices, and use no more than a quarter teaspoon of each.

You will also need some trinkets such as small toy cars, rings, large coins like half-dollars, or other prizes. They will be baked into the pudding, so use common sense when picking the objects.

Grease a quart baking dish. Tear the bread into small pieces. Beat the eggs until stiff. Fold in the heavy cream and add the sugar and spices. Place the bread into the baking dish, pour the wet mixture over it.

Now comes the fun part. Hide the prizes in the pudding. Push them down into the gooey bread, then cover them over. Bake your pudding in the oven for about 20 minutes at 400 degrees Fahrenheit, checking it frequently. The top should be golden brown and an inserted toothpick should come out clean. Serve hot, with butter and whipped cream.

Caution: WARN your guests about the prizes, so that nobody chokes on them! You might want to make a separate pudding for toddlers, or use prizes that aren’t small enough to swallow. The coins represent money, the cars mean a journey, and the rings signify love. 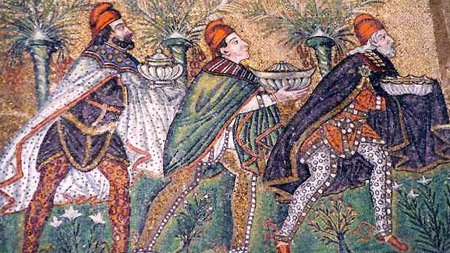 Epiphany or Twelfth Night falls on the 12th day of Christmas, Jan 5. Here are some old divinations and predictions for this night.

If a Danish girl wishes to see her future husband, she must repeat the following verse before going to bed on the eve of Epiphany: “Ye three holy kings to you I pray, That ye to-night will let me see, Whose cloth I shall spread, Whose bed I shall make, Whose name I shall bear, Whose bride I shall be.”

Here are some more: