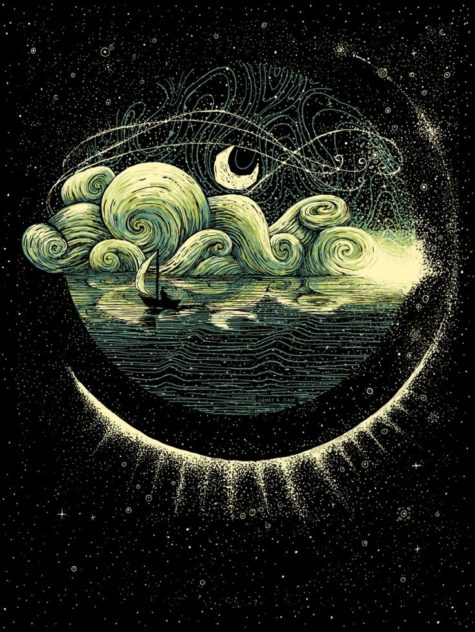 Selenomancy, like most divinatory systems, is quite ancient, and has been practiced since time immemorial by the Babylonians, Scythians, Greeks, and Arabians, among others. It is  the art and practice of divination by the observation of the phases and appearances of the moon.

There are countless moon-related omens that have evolved since prehistoric times. Our celestial companion has long been used to divine the fate of individuals at the time of their birth.

Different methods of Selenomancy take into consideration the patterns observed on the surface of the moon, the phase the moon is in, its visibility through the cloud cover, and the colors of its reflection. In ancient Assyria diviners interpreted the appearance of a ring or halo around the moon as an omen of an impending siege. However, a break in it indicated a fortunate escape.

When interpreting moon reflections and colors, it was believed that:

If if rains on the first Tuesday after the full moon, it will continue to do so for the rest of that moon period. Similarly, if it is dry on that first Tuesday, it will remain dry for that moon period. If the moon is clear on is rising, it denotes that in the summer there will be fine weather but in the winter there will be a severe cold spell. Clearness at the full moon suggests a fair period, as does a halo that melts quickly. A double halo means there is going to be a storm.

An ancient superstition is that it is bad luck to have a child born in moonlight. It was also believed that anyone sleeping in moonlight for any length of time ran the risk of going either blind or crazy.

Sources: Moon Magic and The Occultopedia