Aeromancy – What is it? 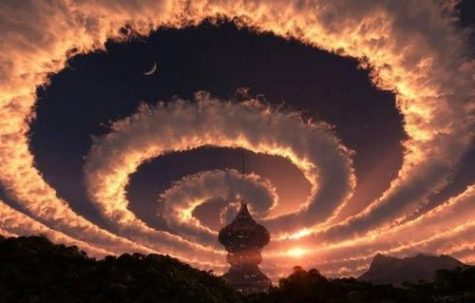 Aeromancy (from Greek aero, “air”, and manteia, “divination”) is the art of foretelling the future by the observation of atmospheric, air or sky phenomena. This goes beyond the range of weather forecasting, concentrating in such things as wind currents, cloud shape and formation, comets and falling stars, spectral formations, and other phenomena which are not normally seen or visible in the heavens. Even today such visions cause speculation and sometimes consternation among human viewers.

Francis de la Tour Blanche says that Aeromancy is the art of divining by means of specters which are made to materialize in the air, or the depiction by the aid of demons, of future events which are projected on the clouds as if by a magic lantern. For him, thunder, lightning and the aspect of the sky and planets belongs to astrology.

Due to the historical interest people have had in weather, seeing it as a medium by which the gods expressed both joy and anger towards those who worshiped them, it is no surprise that aeromancy is one of the oldest forms of divination. The Hindus, Etruscans, and Babylonians in particular found the signs in the sky to be of great interest and practiced forms of chaomancy and ceraunoscopy. This fascination with the omens in the skies was reflected by the gods worshiped by these peoples. Two gods associated with ceraunoscopy are:

There are several types of divination that can be categorized under the term “aeromancy”:

Some forms of modern aeromancy have taken a more introspective turn than their historical counterparts. For instance, modern nephomancy is a receptive, almost meditative process, by which a person is said to be able to examine their unconscious. The nephomancer studies the clouds, whose formations are random and constantly changing. The images and symbols the diviner picks out from the chaos are believed to have some sort of significance to the diviner, so long as he applies his own personal interpretations to the symbols, rather than those written or spoken about by another.