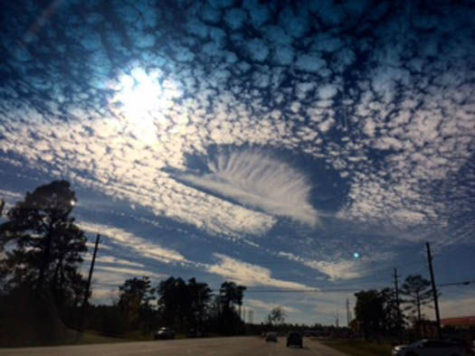 Nephomancy or Nephelomancy is divination by studying clouds. This involves observing and interpreting the color, shape and position of clouds in the sky. The Celtic Druids made extensive use of nephomancy, which they called neladoracht.

Celtic shamans sometimes practiced a form of Nephomancy that was closely related to Hydromancy and Scrying. After finding a hollowed stone or other depression that was filled with rain water, priests would look into it studying the cloud formations reflected on the water’s surface.

To practice Nephomancy today, one should ask specific questions and then observe the shape and disposition of the clouds. This is easy enough to do in most parts of the world and requires only a basic understanding of the forces involved.

Throughout history symbols of political or religious importance have been seen in the clouds. In A.D. 312 when Emperor Constantine was marching against the army of Maxentius at Rome, both he and his entire army saw a shining cross of light amid the clouds. It was said the cross contained the Greek words “By This Conquer”. Later that night Christ appeared to Constantine in his dreams bearing a cross in his hand ordering Constantine to have a military standard made in the same image. Under this standard his outnumbered army was victorious. Down through history entire military battles have been witnessed in the clouds.

A Medieval form of nephomancy involved summoning ghosts and specters to project images of future events onto clouds.

François de la Tour Blanche wrote that aeromancy (a form or nephomancy)  was the art of fortune-telling when specters materialize in the air, possibly with the aid of demons, projecting images of the future onto clouds like a magic lantern.

Modern nephomancers observe the ever changing shapes of cloud formations as a form of meditation.

One Response to Nephomancy – What is it?