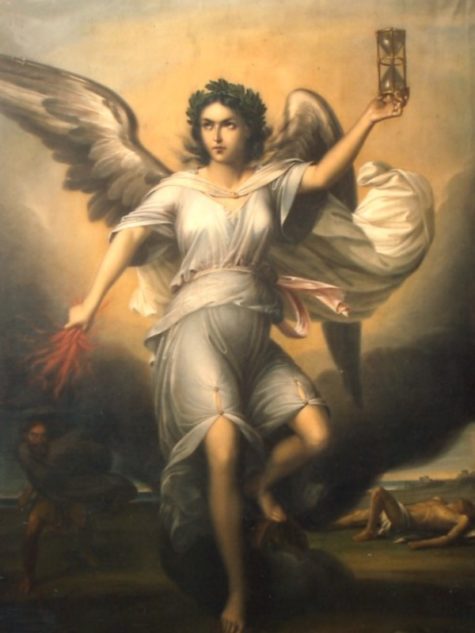 Nemesis is the Greek Goddess of balance, justice, retribution, and vengeance. Evil deeds, undeserved good fortune, and crimes that go unpunished or that bring rewards, may invoke Her wrath and remorseless justice and retribution.

Nemesis resembles modern images of angels. She is a winged, wreathed woman, usually dressed in white.  She can also be seen as a Griffon holding a Wheel of Fortune. She is sometimes known as, Adrasteia, which means “The Inescapable.”

Nemesis measures out happiness and unhappiness making sure that happiness does not occur excessively. If you are arrogant before the Gods, she will mete out the punishment. What goes around comes around and you can be sure that Nemesis will use Her powers against those who deserve it.

She is implacable and remorseless, but she is not cruel. Nemesis distributes just deserts. She is the spirit of righteous, justified anger, directing her powers against those who have violated cosmic order. Nemesis has broader jurisdiction than the Erinyes, who may be her sisters. While the Erinyes only avenge shed blood, Nemesis takes action wherever natural laws are flouted, broken, or disrespected.

Nemesis serves as a personal goddess offering protection and sponsorship to devotees. Those who invoke her protection are expected to behave honorably and to uphold natural moral code. You can find spells and rituals that invoke Nemesis in the Book of Shadows.

It is believed that Nemesis is the daughter of Nyx the dark Goddess of night and Erebus, God of the Underworld. Her closest companion is Aidos, the Goddess of Shame. Greek prophesies suggests that when humans become more wicked than good, Nemesis and Aidos will abandon the Earth and then all hell will break loose! 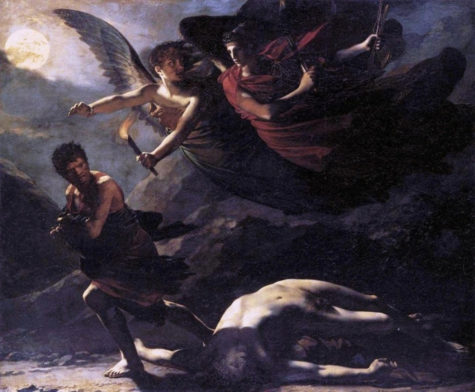 Nemesis hasn’t left yet and is still administering justice. German painter Alfred Rethel painted her as an avenging angel in hot pursuit in his 1837 painting, “Nemesis Pursuing a Murderer.” According to legend, a high-ranking man with secret, undiscovered crimes on his conscience won Rethel’s painting in a Frankfurt lottery. Contemplation of Nemesis’ portrait allegedly drove him mad.

Nemesis Stones are stones taken from an altar of Nemesis. Stones are engraved with an image of Nemesis, usually in the form of a young woman standing with one foot on a wheel. They are worn as amulets around the neck and set into rings. They exorcise and ward off evil spirits as well as preventing and banishing nightmares and healing the moonstruck.

Nemesis’ closest companion is Aidos, Goddess of Shame, and Artemis is Nemesis’ good friend. She may be worshiped together with Themis, Goddess of Divine Order. Nemesis is often found in the company of Tyche, Goddess of Fortune, if only to ensure that people get what they deserve.

As the “Goddess of Rhamnous”, Nemesis was honored and placated in an archaic sanctuary in the isolated district of Rhamnous, in northeastern Attica. There she was a daughter of Oceanus, the primeval river-ocean that encircles the world.

Pausanias noted her iconic statue there. It included a crown of stags and little Nikes and was made by Pheidias after the Battle of Marathon (490 BC), crafted from a block of Parian marble brought by the overconfident Persians, who had intended to make a memorial stele after their expected victory. Her cult may have originated at Smyrna.

Nemesis and Helen of Troy

In some metaphysical mythology, Nemesis produced the egg from which hatched two sets of twins: Helen of Troy and Clytemnestra, and the Dioscuri, Castor and Pollux. While many myths indicate Zeus and Leda to be the parents of Helen of Troy, the author of the compilation of myth called Bibliotheke notes the possibility of Nemesis being the mother of Helen. 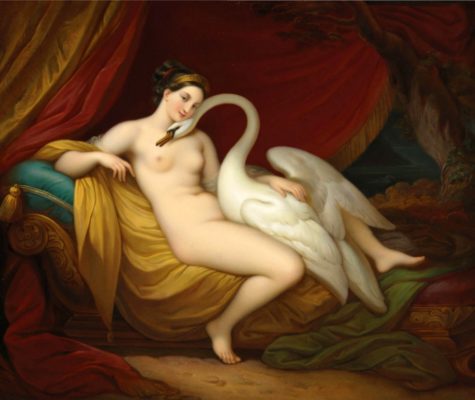 Nemesis, to avoid Zeus, turns into a goose, but he turns into a swan and mates with her. The story is as follows:

Rich-haired Nemesis gave birth to Helene when she had been joined in love with Zeus the king of the gods by harsh violence. For Nemesis tried to escape him and liked not to lie in love with her father Zeus the son of Kronos; for shame and indignation vexed her heart: therefore she fled him over the land and fruitless dark sea.

But Zeus ever pursued and longed in his heart to catch her. Now she took the form of a fish and sped over the waves of the loud-roaring sea, and now over Oceanus’ stream and the furthest bounds of Earth, and now she sped over the furrowed land, always turning into such dread creatures as the dry land nurtures, that she might escape him.

Nemesis, as she fled from Zeus’ embrace, took the form of a goose; whereupon Zeus as a swan had intercourse with her. From this union she laid an egg, which some herdsman found among the trees and handed over to Leda. She kept it in a box, and when Helene was hatched after the proper length of time, she reared her as her own. It is in this way that Leda comes to be the mother of Helen of Troy.

Here is a slightly different story, which also explains the creation of the Constellation Cygnus (or the Swan):

When Zeus, moved by desire, had begun to love Nemesis, and couldn’t persuade her to lie with him, he relieved his passion by the following plan. He bade Venus Aphrodite, in the form of an eagle, pursue him; he, changed to a swan, as if in flight from the eagle, took refuge with Nemesis and lighted in her lap. Nemesis did not thrust him away, but holding him in her arms, fell into a deep sleep.

While she slept, Zeus embraced her, and then flew away. Because he was seen by men flying high in the sky, they said he was put in the stars. To make this really true, Jupiter put the swan flying and the eagle pursuing in the sky. But Nemesis, as if wedded to the tribe of birds, when her months were ended, bore an egg. Hermes took it away and carried it to Sparta and threw it in Leda’s lap. From it sprang Helen, who excelled all other girls in beauty.

Although a respected goddess, Nemesis brought much sorrow to mortals such as Echo and Narcissus. Narcissus was a very beautiful and arrogant hunter from the territory of Thespiae and Boeotia, who disdained the ones who loved him. 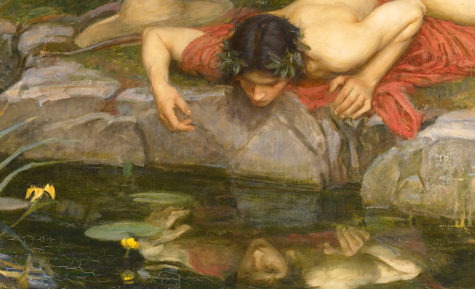 Nemesis lured him to a pool where he saw his own reflection in the water and fell in love with it, not realizing it was only an image. He was unable to leave the beauty of his reflection and he eventually died. Nemesis believed that no one should ever have too much goodness in their lives, and she had always cursed those who were blessed with countless gifts.

One Response to The Goddess Nemesis

Promote Your Page Too
Bread Crumbs
A trail of bread crumbs just in case you lose your way exploring your higher power. Site News > The Powers That Be > What’s New > Greek Gods and Goddesses > The Goddess Nemesis