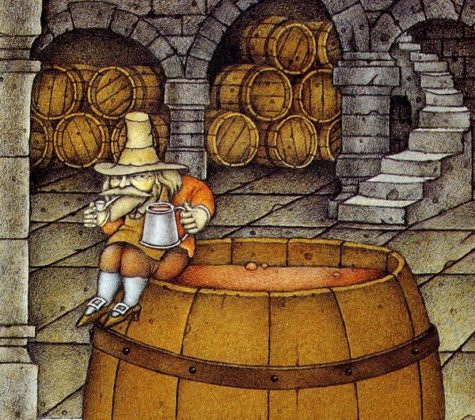 Clurichauns may or may not be the same type of spirit as Leprechauns. If not, they are closely related. Like Leprechauns, Clurichans are virtually exclusively male. The Clurichaun may be the nocturnal form of the Leprechaun, out on a bender after a hard day’s work. Alternatively, some perceive Clurichauns to be Leprechauns lacking a work ethic.

Unlike hardworking, wealth-accumulating Leprechauns, Clurichauns spend all their time drinking. They are virtually always soused although they allegedly retain their good manners, unlike the reputedly sometimes surly Leprechaun. Clurichauns come out at night to drink, party and play pranks on people.

The folklorist Nicholas O’Kearney described the Clurichaun in 1855 as follows:

“ The Clobhair-ceann was another being of the same class: he was a jolly, red-faced, drunken little fellow, and was ever found in the cellars of the debauchee, Bacchus-like, astride of the wine-butt with a brimful tankard in hand, drinking and singing away merrily. Any wine cellar known to be haunted by this sprite was doomed to bring its owner to speedy ruin.”

Katharine Briggs stated that he was “a kind of buttery spirit, feasting himself in the cellars of drunkards or scaring dishonest servants who steal the wine.”

He is also described as a trickster and practical joker, and a disturber of order and quietness in a household, making noise day and night. Despite his often troublesome nature, the Clurichaun takes special care of the family to whom he has attached himself, endeavoring to protect their property and lives provided he is not interfered with. This dual nature makes him similar to the domestic hobgoblin. 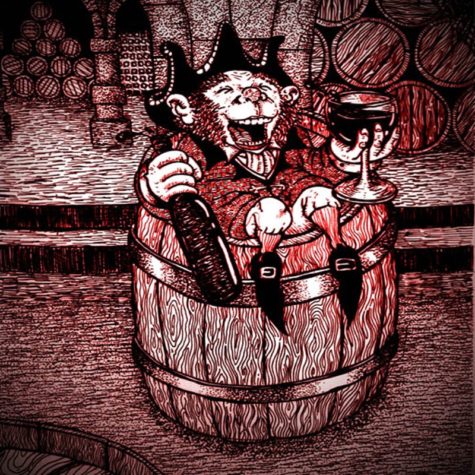 Besides his love of drinking, the Clurichaun also enjoys pipe smoking, and the small disposable clay pipes known as “fairy pipes” that are often found while digging or plowing are said to belong to him. He also knows the secret of making beer from heather.

In olden days, many were butter thieves. They still like to raid the pantry.

The only occupation for which the Clurichaun displays enthusiasm is as guardian of wine and liquor cellars. The Clurichaun will protect your cellar from thieves and can allegedly prevent wine from spoiling and bottles from breaking or leaking. Simply request his presence and explicitly leave him a sample of whatever you have in stock. Leave him offerings on a regular basis lest he decide to begin serving himself. (He may anyway.)

The Clurichaun is sometimes portrayed carrying a jug of ale or wearing a leather apron with hammer in hand, whistling as he works. He also carries a magical purse (or sometimes a pewter beggars cup) with varying properties. It may contain a shilling (known as the “lucky shilling” or spre na skillenagh) that always returns to the purse no matter how often it is spent, or it may always be full of money, and for this reason mortals will often try to capture the Clurichaun . Even if he is caught he has the power to vanish if he can make his captor look away even for an instant.

He frequently carries two such purses, one containing the magic shilling and the other containing a normal copper coin, and if captured he will present the latter before vanishing. Like the Leprechaun he is sometimes said to have knowledge of hidden treasure and can be forced to reveal its location. In such instances one of his tricks is to create the illusion of multiple treasure markers so that the seeker will not know its exact whereabouts. 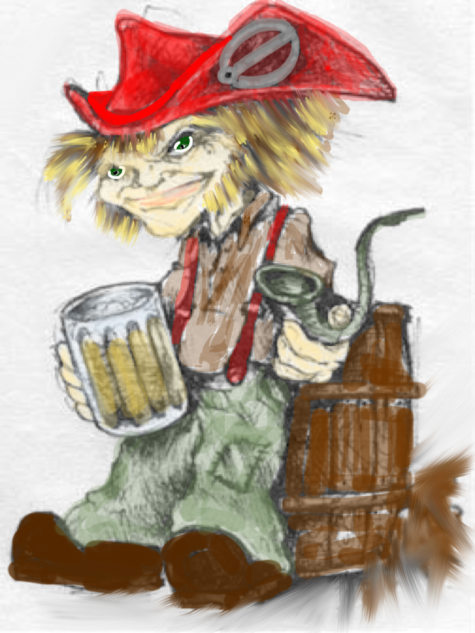 In the folktale “The Haunted Cellar”, recorded by Thomas Crofton Croker in 1825, a Clurichaun named Naggeneen haunts the wine cellar of an Irish lord, drinking everything in sight and playing frightening pranks on the servants.

He is described as a little man measuring six inches in height with a face like a withered apple. He has twinkling eyes and a nose that is red and purple from heavy drinking. He wears a red nightcap, a short leather apron, light blue stockings, and shoes with large silver buckles. When he is discovered by the master of the house, Naggeneen talks him out of moving elsewhere by implying that he would simply move with him.

Other descriptions have him wearing red like other solitary fairies.

In another tale, “Master and Man”, a young man named Billy Mac Daniel is on his way home one winter night when he is offered a glass of liquor by a Clurichaun to warm himself. He takes the drink but when he refuses to pay for it he is compelled by the Clurichaun to serve him for seven years and a day. Billy, however, is eventually able to break his servitude by invoking the blessing of God.

In this story, the Clurichaun is able to pass through keyholes to invade homes and wine cellars and can transform bog rushes into horses to be used as mounts. Clurichauns can also fly through the air on rushes similar to witches and their broomsticks.

Promote Your Page Too
Bread Crumbs
A trail of bread crumbs just in case you lose your way exploring your higher power. Site News > The Powers That Be > What’s New > Demons and Troublemakers > The Clurichaun