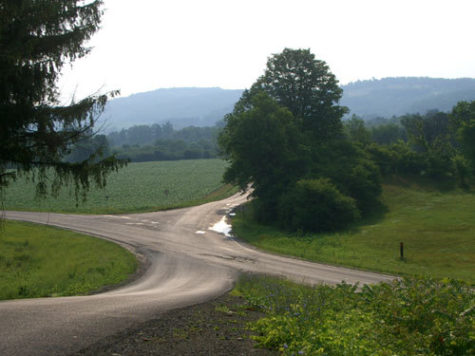 Crossroads are considered sacred in almost all magical traditions. A crossroads is a universally accepted place to hold rituals, leave offerings, or dispose of items you wish to be rid of.

To relieve feelings of depression, helplessness, and hopelessness, journey to a crossroads and absorb the power.

The crossroads is the juncture of powerful energies, where all possibilities meet. Don’t go to a traffic intersection – the most common modern crossroads. Excessive yang energy will only worsen the situation. What you need is a traditional witch’s crossroads, ideally the intersection of remote streets but at least roads with minimal traffic.

You don’t have to do anything; just linger, keep your mind open and absorb the converging energies.

It is believed that Hecate rules over the three-way crossroads. She can see the past, present, and future. It is said that if you should approach a three-way crossroads at night, you would hear her black dogs howling. Her altars have been erected at such places for centuries.

The four-way crossroads are considered to be powerful because all four directions meet at one point. Dirt, rocks, and sticks gathered from such a crossroads are said to have powerful spiritual connections, albeit tricky ones to master. In Greek myths, Oedipus met his fate at the crossroads. From the Yoruban people we have Legba (a god known for his clever tricks) ruling the crossroads.

The strength of Ellegua lies at the crossroad. He is the remover of obstacles. An offering of twenty-one pennies and three candies left at the crossroad will prompt him to be kind and remove the roadblocks in your life.

Ancient people were afraid of what it meant when one direction met another direction. All manner of folklore is available concerning the crossroads. Fairies are said to hang out there, along with ghouls, ghosts, and goblins. Even the Christian Satan is said to roam the crossroads.

Times Square in New York City is known as the “Crossroads of the World.” A true urban crossroads is any intersection where 3 or 4 roads mead and then continue outward unobstructed for eight city blocks in each direction. If any one path is blocked by a dead end, a cul de sac, or a park, it is not a true crossroad.

Metaphysically, a crossroads is a place of sacred transformations, a metaphor for transformational points in our lives, and relate to time and choices. It is a place to go to unblock your path.

Why Crossroads Are So Important

In ancient times the crossroads were places where very important information was exchanged, information that might never reach a town or village. To facilitate this, a common language developed. Called a lingua franca, such a language permitted people from different countries to understand each other well enough to do business.

In addition to learning a common language like lingua franca (Latin was the lingua franca of educated people in Europe for many centuries), crossroads experiences invariably stimulate a desire to learn a foreign language.

Did you know that learning a foreign language increases your intelligence? One reason is that it builds bridges of communication between the right and left side of the brain, increasing flexibility. A person who can come at a problem with right and left brain flexibility has double the resources of someone relying on just one or the other. In addition, on the one side, you learn to speak another language but on the other side, you develop the telepathic ability to understand someone else’s language. This ability often transcends the words being spoken and heard as many people with language ability will tell you.

People who stay at home in the town and village don’t need this kind of information. But if they are wise, they listen to news from travelers because it can portend things in the future. For example a traveler returns and says, “I have been to xx and they will pay fabulous sums of money for this yellow stuff that washes up on the beaches around here [amber]”. Or he might say, “There are restless tribes marauding close to here. We need to be careful or they will wipe us out.” There is no way for a connection to be made between towns and villages if someone doesn’t travel.

In addition to Hekate, Elegua, and various other deities, Mercury, the god of travel, communication, and thieves, presided over the crossroads. The Greeks erected little phallic statues (no pun intended) honoring the god Mercury along the side of the road and at crossroads to honor the god of travelers.