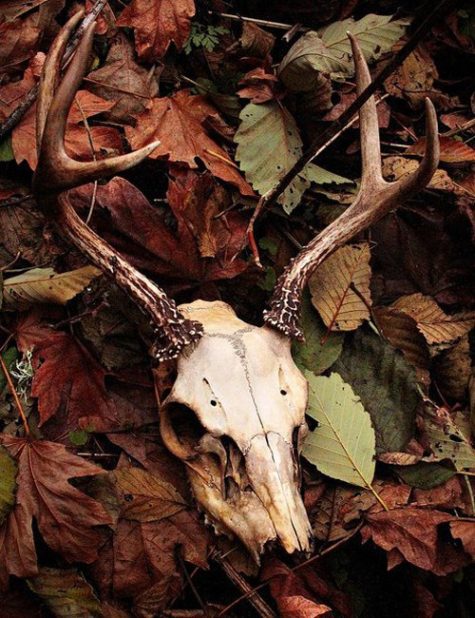 As well as giving structure to the body; bones survive for a long time after death, and so are imbued with magickal properties. Both human and animal bones could be, and were employed in spells and healing charms, and also in divination.

Bones are a type of fetish. A fetish is “an object regarded with awe as being the embodiment or habitation of a potent spirit or as having magical potency (source)”. The word fetish originates from the French fétiche which stems from the Portuguese word feitiço meaning “charm” or “sorcery”. Feathers, bones, crystals, and stones are all types of fetishes. Skulls and bones have an appeal to witches who perform spirit work and are a necessary and simple way to connect with spirits of the dead and of animals.

Working with bones is not just for necromancers and black magicians. Practitioners who work with bones are a wide range of healers, diviners, shapeshifters, rootworkers, witches, shamans, druids, and pagans.

Over two thousand year ago, in China, bones were heated up and the resulting cracks interpreted as indicating a prediction. Bones as predictive devices were used in other ways, too. For example, bones of small animals were collected in a ritual way, and thrown upon the ground in the act of “casting the bones,” a term reference still in use for other divinatory methods, such as rune stones.

In Britain, divination by the blade-bone of a sheep was formerly well known. In Africa, thieves were detected, lost goods found, and problems solved by the ceremony of “Throwing The Bones.” Different kinds, usually those of domestic or wild animals, are used to represent individuals, or spirits, or the forces of nature, and are thrown like dice. The answers to the question being read from how and where they fall.

Animal bones are used in witchcraft and folk magic to commune and work with animal spirits as familiar, guides, and protectors. Like human bones, the bones of animals can be also be used to ground a spirit animal in this realm. Bones act as a spirit vessel for animal familiars to dwell in when you work with them. This doesn’t mean that the spirit lives in the bone(s) all the time, but instead it is their home when you call upon them.

Animal bones and skulls can be placed on an altar or carried in a medicine or crane bag to work with them outdoors or on the move. Animal bones can be used to call upon mythological creatures as well. To do this you need only to combine bones from the different animals that make up the creatures. For example, bind together parts from an eagle and lion to summon a griffon or combine snake, lizard, and the bones or feathers of a bird of prey to summon a dragon.

Animal bones can be incorporated into ritual jewelry for direct contact and easier communion with the spirits the bones belong to. Ritual jewelry using bones is the most practical and direct way of bringing your animal familiars into rituals and spellwork.

If you only have very small bones or a delicate insect to work with than you can place the parts in a glass vial and either use it as a vessel on your altar or attach a chain or leather thong to it to wear around your neck. By wearing animal bones you can take on the attributes and powers of the animal they belong to such as fox teeth for cunning, owl bones for seeing in the dark, or snake bones for the ability to renew and change your life.

Bones can also confer an animal’s magical abilities. Many animals are “shamanic” in nature enabling the practitioner to whom they are familiar to adopt their ability to travel between worlds. Such creatures known to travel between the realms of earth, sea, and sky or have extraordinary powers of transformation include frogs, toads, snakes, all birds (especially water fowl), alligators, crocodiles, turtles, beavers, otters, dragonflies, spiders, beetles, butterflies, cicadas, and more.

Animal bones can be used to craft ritual tools. Many traditional rattles are made using skulls, turtle shells, or little bones tied closely together for the sound of their rattling against one another. Bones can also be tied to staffs or stangs, wands, or even sewn onto ritual robes.

Animal bones, especially chicken and other bird bones, are used for traditional divination methods in many cultures. This can also be incorporated into European practice by carving Futhark or Ogham runes onto animal bones or using slices of deer antler instead of the usual materials of wood and stone.

Among the Australian aborigines, death spells are cast by “singing magic” into a bone and pointing it in the direction of the victim, who then pines away and dies.

A charm against cramping was to carry a knucklebone, or the patella of a man or a sheep.

Those afflicted with headaches could find relief by driving a nail into a dead man’s skull, or by drying and powdering the moss found upon it and using it as snuff.

Bones, like blood and some of the organs of the body, were once thought to be centers of psychic power, and to be the vehicle or dwelling-place of the soul. Life and consciousness remained in them after the death of the original owner, and it was therefore very dangerous to disturb them when they lay in the tomb.

Misfortune, or even death, inevitably followed such an act, which was forbidden alike by reverence for the dead and superstitious fears of their vengeance. Nevertheless, this widespread and strongly held belief did not prevent the quite frequent theft of bones from churchyards and prehistoric burial grounds for use in magick and witchcraft. 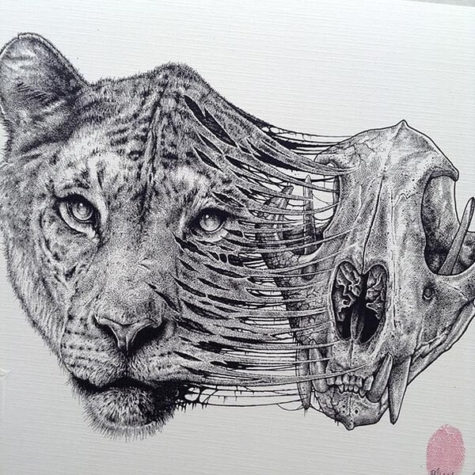 Symbolically, bones carry the essence of the creature that they were once a part of, and there’s a curious but relatively common belief that somehow or other an intact set of bones can be remade into a live body This idea is seen in fairy tales, myths, and traditions from all over the world.

An example of this is the Lapp belief that the bones of a bear, if carefully preserved, will come back to life and the animal will allow itself to be hunted once again. Bear “burial” places have been found where the bones of the bear have been carefully reconstructed. These sites also show evidence of respectful funerary rites.

In a similar practice, the Plains Indians would bury the bones of the buffalo with due care and attention so that the animal would be able to come back to life.

Due to its size, the bone is one of the very last in the body to rot, along with the skull. For this reason – its longevity – the bone was used as a vessel during religious and magickal rites and rituals.

Because bones are such an important part of the body and because they are believed to hold the essence of their owner, the bones of saints are considered holy relics, imbued with magickal powers, and kept locked away in churches. They were believed to be so holy that devils and demons would keep well away, and if the bones were dipped into wine or water, the resulting liquid would be infused with mysterious powers including the ability to cure various ailments.

2 Responses to Bone Magick and Lore