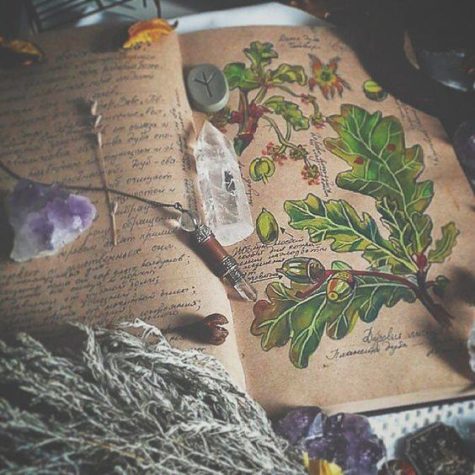 Angelica was linked sometimes with St. Michael the Archangel and was even called “The Root of the Holy Ghost”. It protects against witchcraft, evil spirits, spells and enchantments.

Basil is believed to have derived its name form the Basilisk, the fabulous dragon-like creature that was deadly to anyone who looked at it. This may have spawned the old belief that Basil begot scorpions.

Betony, the original herb of Magic and medicine discovered by Chiron the Centaur. Cured against ‘elf sickness’. Believed that animals seek it out when ill. Old lore says that if two snakes are put into a ring of Betony, they will fight to the death. Considered magically  powerful against evil spirits.

The word bistort means ‘twice twisted’. The twisted root resembles a snake. English names include snakeweed and adderwort. Regarded as a cure for snake bites. Lore also says that this herb can help a woman conceive a child.

Blackberry was considered to be a holy plant. In the Highlands, they’re called Blessed Brambles. If twined into a wreath with rowan and ivy, will keep away evil spirits. Brambles or alternatively osieres, would be plaited around a grave to keep a ghost from rising. Believed that Christ used a bramble to drive the money changers out of the temple and to spur his donkey onto Jerusalem. Thought to cure various ailments if the sick would walk under an archway of bramble rooted at each end.

A piece of broom is worn in a cap because its ancient reputation as a plant both useful to witches and against them. Was also used as a magic sleep enhancer and as a power in love spells.

White Byrony is used in place of European Mandrake root. Helped in fertility spells for barren women. Also called Womandrake and related to the Yam family. In France was called “Herb of Beaten Wives” because the berry juice resembles the black and blue marks of beatings.

Discovered by Chiron the Centaur. Centaury was used to cure fevers. Was considered to be another powerful herb against Witchcraft and Magic.

Chicory was believed to be a cure for failing sight and poor eyes because its flowers only open during sunlight. If gathered by a special ritual, it was believed to make one invisible and also open locked doors and chests. To do so, one must cut the plant with a gold blade on St. Jame’s Day, July 25.

Cinquefoil meant “small and powerful”. Hung in doorways to keep out evil spirits. A main ingredient in Witch potions and ointments.

Old lore says that the Devil bit it for envy because the herb had so many good virtues and was so good for mankind. In Cornwall England, was referred to as Devil’s Button and to pick the plant one was sure to receive a nocturnal visit from the Devil.

Dill was known as an anti-witch plant. Was used to lull people into stupors and thus mothers used it on their babies to keep them sleepy. Used in and against spells.

St. Michael used it along with rue and three drops from the Well of Life to anoint his hurt eyes after his battle with the Devil and the latter’s fall.

Fennel has genuine wind-expelling properties. Used to keep evil spirits away especially on Midsummer’s Eve when it would be hung with St. John’s Wort over doorways. Keyholes blocked with fennel would keep out ghosts. Was also believed to confer longevity and improve strength and courage.

Foxglove was associated with fairies and elves as they gave gloves to the fox so he could raid the chickens and escape harm. Said that if the fairies wore these ‘gloves’ they could do anything. Was believed to be dangerous to cut foxglove but once you’d done so and lived it was a good defense against the little people.

In Wales it’s juice was rubbed into a floor in the shape of a cross to protect the home from the fey folk. It could also be used to kill a changeling child. Also believed that the souls of the dead inhabited the flowers thus the alternate names of ‘bells’, ‘thimbles’ or ‘deadman’s fingers’.

Known alternatively as St. John’s Herb and Mugwort was considered to be the “Mother of Al Herbs.” Some believed that St. John the Baptist wore a girdle of Mugwort in the forest where he lived. Was cured in the Midsummer bonfires and hung up over doorways to keep evil at bay. Also used to keep travelers from getting too weary.

Orchid, another name for Satyrion root which was believed to be a powerful aphrodisiac. Men and women ate the tubers as sexual stimulants and in the hopes of defining what sex a newborn would take.

Parsley was not originally considered an herb but rather in connections with both ‘noble’ and ‘funeral’. The Greeks strewn it on graves. It was used on food plates as a garnish as an antidote to poison and thus put on a plate was considered a token of trust. It was also thought if a man ate some of the seeds prior to drinking he’d be able to drink more and still retain his faculties.

The Peony was regarded as having a divine origin. Sacred to Peon, physician to the Gods. Would protect from evil spirits and storms and would in particular protect shepherds and their flocks, farmers and their crops. Was considered as dangerous as Mandrake to dig up and thus the same kinds of protections must be used. It was also believed to be highly dangerous to dig up if a woodpecker was nearby as the gatherer of the herb would lose his sight.

Plantain was known as ‘healing herb’ in Scotland and Ireland. Was considered a very powerful plant since it could stand back up against the boot heel or chariot wheel crushing it down. Due to this belief, it was used to treat wounds and bruises.

Rosemary was dropped into coffins as a way of letting the dead know that you’d not forget them. Also very protective against physical injury and thunder and or lightning. Could renew youth and help ‘special’ enterprises to grow and succeed.

Sage has an ancient reputation as a healing plant and thought to confer long life. Tradition says that if the plant lives or dies so will a business owner’s livelihood thrive or fail.

Solomon’s Seas is said to bear a symbol on its roots, the two interwoven triangles which make up the hexagram, will scare off evil spirits! The white flowers were used in love potions and the plant was used to help ‘knit bones’ together.

Also known as Little Dragon, Tarragon is reputed to have sprung up where the banished serpent from the Garden of Eden brushed up over the ground along with Mugwort and Wormwood. Since Dragons were both terrifying and protective, it was believed to cure snake-bite.

The seeds of this herb resemble a viper’s head and thus thought to be another cure against snake bite.

Yarrow, also known as Bloodwort is noted for its wound healing powers and was regarded as another herb dedicated to the Devil.

Posted in Herbs and Spices, Lists | Tagged All Purpose