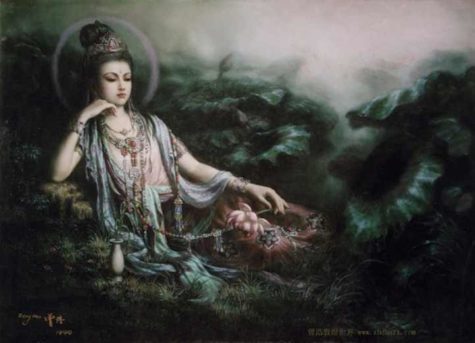 Kwan Yin is the very essence of mercy and compassion; among the most beloved and well known of all spirits. Technically, Kwan Yin is considered a Bodhisattva, venerated as such throughout the Buddhist world but she also possesses the stature of a goddess and many consider her to be one, not just modern Western goddess devotees but also in East Asian folk religion. 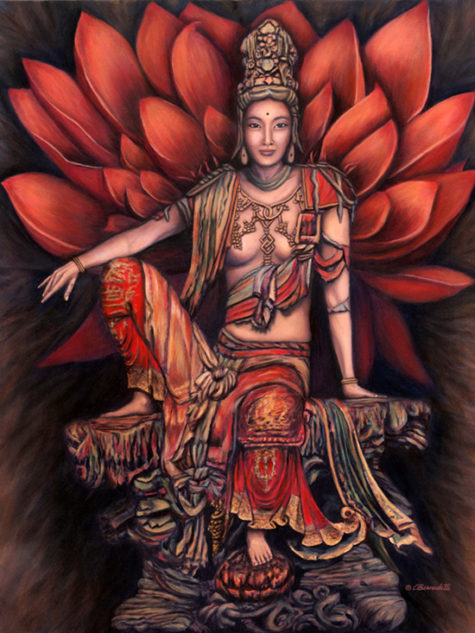 Kwan Yin is a spiritual phenomenon; she transcends religious boundaries and is also found in Taoist and Shinto shrines, even in the shrine of her main rival, the Lady of T’ai Shan. 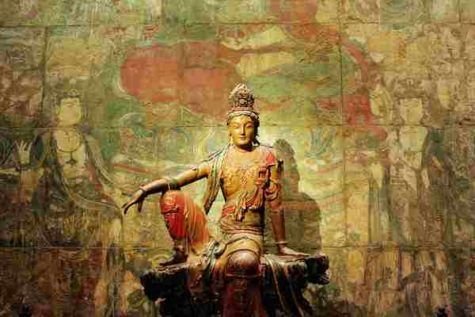 Kwan Yin as we know her today first emerged from China’s wild northwest frontier, by the Silk Road, sometime between the 7th and 9th centuries CE and began to move into the Chinese heartland during the 9th and 10th centuries along with detailed legends of her life, which do not correspond to Avalokiteshvara but to the Taoist goddess, Miao Shan. Kwan Yin may really be Miao Shan assuming the official guise of Avalokiteshvara as Buddhism was then socially dominant while Taoism was disparagingly considered folk religion. Her strong identification with horses may also indicate her origins on the western frontier.

Alternatively, many believe Isis, Mary Magdalen, and/or Mary, Mother of Christ traveled the length of the Silk Road, finally emerging as Kwan Yin or that their images may have served as a portal for a frontier spirit. Whoever she is, she is entirely good. The desire of so many individuals and traditions to claim Kwan Yin testifies to her appeal and power.

Kwan Yin has many forms. She is typically depicted as a kind, beautiful woman dressed in white. In her fertility goddess path, she carries at least one child. These statues closely resemble images of Isis or the Madonna. Kwan Yin is depicted with one-thousand eyes and one thousand arms indicating her ability to see all and help all. Kwan Yin may be accompanied by her acolytes, a small girl and boy.

However, Kwan Yin is a goddess of the masses. Not everyone can afford a statue, and so Kwan Yin’s name or even her title, the Goddess of Mercy, written on a piece of paper and posted where it is visible is considered just as powerful and effective as an image.

Attributes: Rosary, lotus, a sutra vase from which pours compassion, a willow branch symbolizing her powers of exorcism (according to Chinese shamanism, demons flee from the presence of willow); fish basket

Note: Kwan Yin is a vegetarian. Her image on restaurant menus often indicates that vegetarian fare is served. Give appropriate offerings (i.e. don’t give her steak). Many devotees adopt a vegetarian diet in her honor but even those who do not, traditionally eat vegetarian on her sacred days. 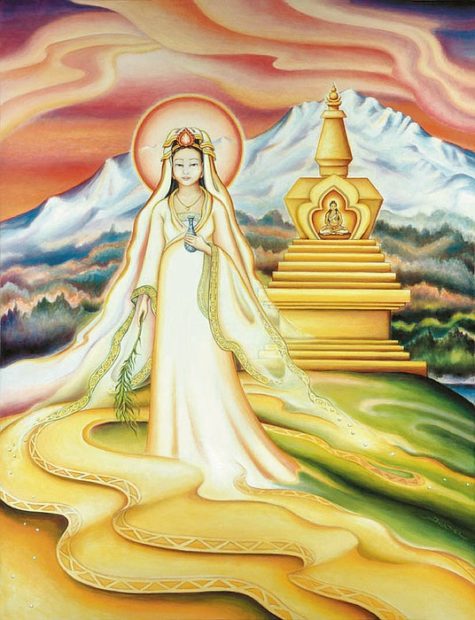 Kwan Yin epitomizes goodness. No one is kinder, more compassionate or more benevolent. Kwan Yin doesn’t possess a single malevolent or malicious impulse. She is also exceptionally responsive, as evidenced by her world-wide veneration. If you are new to spirits or are generally afraid of them, Kwan Yin may be the right spirit for you.

One Response to Kwan Yin

Promote Your Page Too
Bread Crumbs
A trail of bread crumbs just in case you lose your way exploring your higher power. Site News > The Powers That Be > What’s New > Asian Gods and Goddesses > Kwan Yin