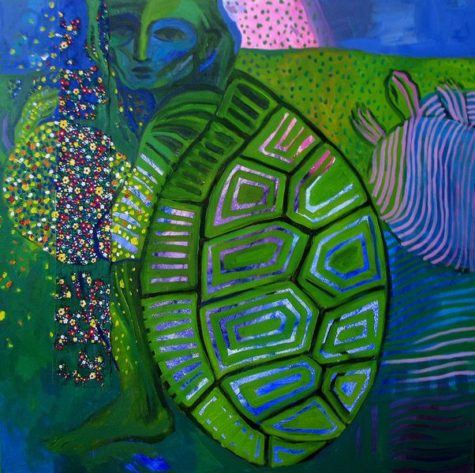 Chelone is said testudo (tortoise) in Latin. “Khelônê” means “tortoise” in Greek. The tortoise was a symbol of silence in ancient times.

Chelone, an Oread nymph (mountain nymph) of Arcadia in Greek mythology. She objected to the nuptials of Hera and Zeus. Some accounts say that she was jealous of Zeus’ marriage to another nymph, other stories contend that she was late and then decided not to go, claiming she never received her invitation.

The stories vary as to how it happened, however, Zeus was angered by her absence, and as a result she was transformed into a tortoise, condemning her to eternal silence. Because of this, Chelone is the spirit of silence. She may be invoked by those who need silence as well as by those who have been silenced. Chelone is the matron of political prisoners, those persecuted for voicing objections as well as those afraid to speak their minds.

Chelone is also the matron of the homeless and those able to carry all their possessions on their backs.

Variations of the story are as follows:

Certain parts of the myth tell that Chelone was taking too long to be ready for the feast, which caused Zeus to become enraged. In retribution, he crashed her house over her, and thus condemned her to drag her house forever as a tortoise.

In some stories and fables, the Gods are referred to as their Roman equivalents: Jupiter (Zeus), Juno (Hera), and Mercury (Hermes).

Promote Your Page Too
Bread Crumbs
A trail of bread crumbs just in case you lose your way exploring your higher power. Site News > The Powers That Be > What’s New > Greek Gods and Goddesses > Chelone – The Turtle Goddess