Goddesses of the Hours 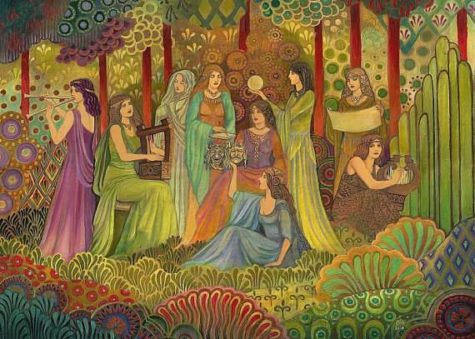 The Horae (Greek Goddesses of the hours) personified the twelve hours (originally only ten), as tutelary goddesses of the times of day. The hours run from just before sunrise to just after sunset, thus winter hours are short, summer hours are long. Here’s the list:

An interesting practice to bring a deeper understanding of the Goddess energy, and a deeper connection to the rhythms of the day is to take a short moment to acknowledge each goddess at her approximate time. This can be as simple as a small salute or short hello. You might be pleasantly surprised at the magickal turn your life takes when you practice this consistently over time.

They are the truthful ones who guard the gates of Olymus. Although described as the daughters of Zeus, legends suggest that they were the ones who raised Hera. (It’s been theorized that they were originally only Themis’ possibly parthogenic daughters. Later, when paternity became significant, Zeus was incorporated into the myth.)

In their earliest manifestations, there were only two or three Horae. Eventually, however, more joined them until there were twelve Horae. They are closely allied with Hera, Aphrodite, and Dionysus:

The blessings of the Horae are invoked on brides, weddings, and children.

The ancient Greeks did not have hours of fixed length as we do today. Instead they divided the hours of daylight into twelve portions identified by the position of the sun in the sky. Thus the length of the hour varied between the longer days of summer and shorter ones of winter.

The twelve Horai were not always clearly distinguishable from the Horai of the seasons who were also described as overseeing the path of the sun. From the Nonnus, Dionysiaca, a Greek Epic from the 5th century AD:

“The four Horai (Seasons) were greeted by the twelve circling Horai (Hours), daughters of Khronos (Chronos, Time), tripling round the fiery throne of the untiring Charioteer in a ring, servants of Helios that attend on his shining car, priestesses of the lichtgang each in her turn : for they bend the servile neck to the ancient manager of the universe.”

Promote Your Page Too
Bread Crumbs
A trail of bread crumbs just in case you lose your way exploring your higher power. Site News > The Powers That Be > What’s New > Greek Gods and Goddesses > Goddesses of the Hours