The Ten Kings of Hell 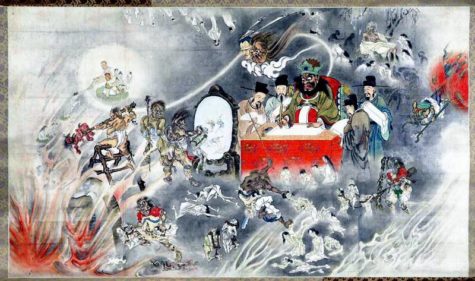 Also known as The Ten Kings, or the Ten Judges of Hell; the Ten Kings of Hell are afterlife judges. They derive from Chinese Taoist tradition, filtered through Japanese Buddhism.

But what of those whose actions are more ambiguous? Those who may have performed both good and bad deeds while alive? Where do they go? That’s for the Kings of Hell to decide.

The Kings of Hell preside over a series of afterlife trials intended to determine the fate of the dead soul. The person’s actions while alive, both positive and negative are weighed, analyzed and discussed. Jizo serves as the defense attorney for dead souls and always attempts to present human actions in the best possible light. Final outcome, however is up to the Kings of Hell.

The Eighteen Levels of Hell

Chinese legends speak of the “Eighteen Levels of Hell”. Each court deals with a different aspect of atonement and different punishments; most legends claim that sinners are subjected to gruesome tortures until their “deaths”, after which they are restored to their original state for the torture to be repeated. 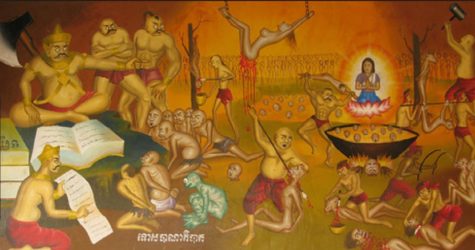 The concept of the eighteen hells started in the Tang dynasty. The Buddhist text Wen Diyu Jing mentioned 134 worlds of hell, but was simplified to the Eighteen Levels of Hell for convenience. Sinners feel pain and agony just like living humans when they are subjected to the tortures listed below. They cannot “die” from the torture because when the ordeal is over, their bodies will be restored to their original states for the torture to be repeated. The following is a list of common punishments and tortures in the hells:

Some literature refers to eighteen types of hells or to eighteen hells for each type of punishment. Some religious or literature books say that wrongdoers who were not punished when they were alive are punished in the hells after death. 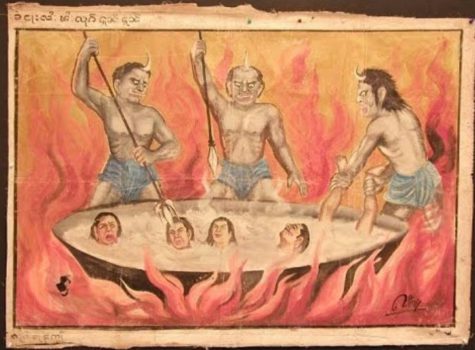 Ānantarika-karma or ānantarika-kamma is a heinous crime that through karmic process brings immediate disaster. They are called ‘anantarika’ because they are ‘an’ (without) ‘antara’ (interval), in other words the results immediately come to fruition in the next life, i.e. the participant goes straight to hell.

These are considered so heinous that Buddhists and non-Buddhists must avoid them. According to Buddhism, committing such a crime would prevent the perpetrator from attaining the stages of sotāpanna, sakadagami, anāgāmi or arhat in that lifetime. The five crimes are:

In Mahayana Buddhism these five crimes are referred to as pañcānantarya and are mentioned in “The Sutra Preached by the Buddha on the Total Extinction of the Dharma”.

Promote Your Page Too
Bread Crumbs
A trail of bread crumbs just in case you lose your way exploring your higher power. Site News > The Powers That Be > What’s New > Asian Gods and Goddesses > The Ten Kings of Hell