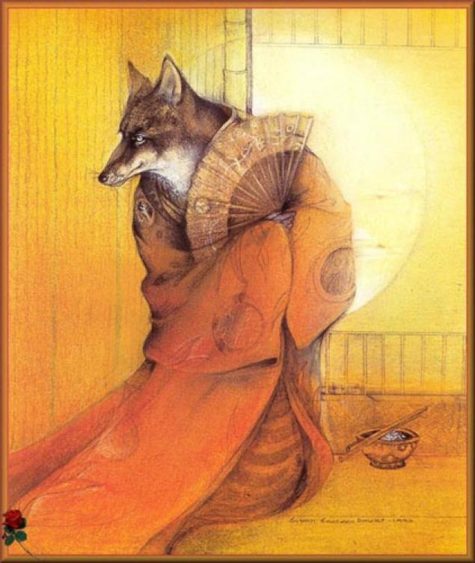 Theoretically, ordinary foxes can eventually evolve into Fox Spirits in the way that humans can evolve into spirits, too.

Most Fox Spirits are shape-shifters; they can take many forms, including that of humans. Often they appear in the guise of seductive young women; however, any form is possible. Fox Spirits can also shape-shift so that they appear identical to a specific person. Thus, someone may recognize a friend or relative at the door and open it, only to admit the Fox Spirit in disguise.

Fox Spirits, seductive, sneaky, and often treacherous, are staples of modern manga, anime, and other forms of entertainment. Once upon a time, Fox Spirits were considered protectors, teachers, providers, and sponsors of the occult and alchemical arts. Even now, some Fox Spirits are saintly and helpful. 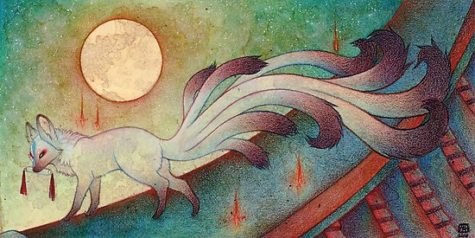 The foxes that serve as Inari’s messengers are miracle workers, understood as sacred and godly.

Among the functions of Chinese Fox Spirits is protection of archivists and librarians. If a book or document cannot be found, ask the Fox Spirits for help. Make an offering alongside the request. Offerings should be proportionate in size to the importance of the request. Then leave the room for a little while to give the spirit space and opportunity to work some magick. If the Fox Spirits have cooperated, whatever you’re looking for should stick out or somehow draw your attention itself.

Fox Spirits may once have been a feature of pre-Buddhist East Asian shamanic religion. Fox Spirits tend to be sexually assertive, female spirits. As centuries passed and, society became more conservative, women were expected to be modest and subservient. Fox Spirits developed a bad reputation and became feared, especially in Japan and Korea.

In China, their reputation is somewhat milder, although some sexual associations exist. 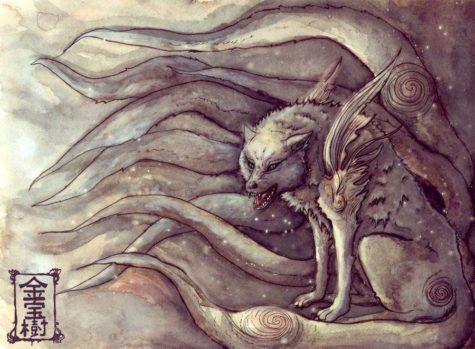 Eventually the Fox Spirit may push the true individual out, taking over body, mind, soul, and personality – either full time, or just intermittently. The Fox Spirit speaks through the person’s mouth, often indulging in obscenities, frequently sexual, which the person would normally never use.

Although most Fox Spirits are perceived as greedy or power hungry, spiritual motivation may exist, as well; what the Fox Spirit may really desire is a shrine and daily offerings. The only way for them to make their desire known is through a human mouth, similar to African Zar spirits. Sometimes this is enough to satisfy them and the Fox Spirit evolves into an ally rather than an enemy. 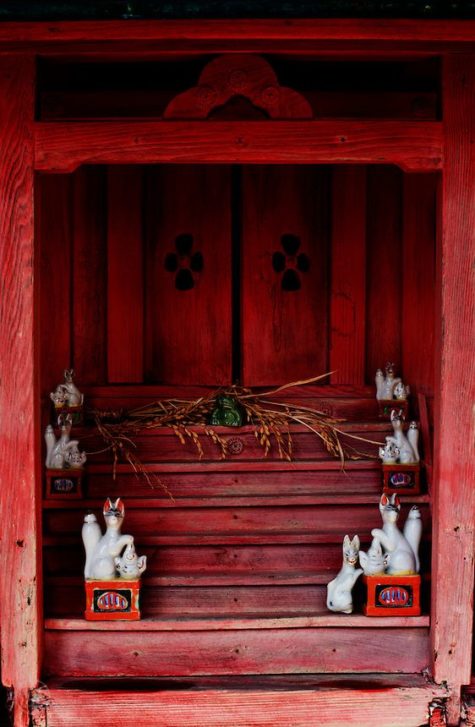 Fox Spirits’ very favorite food of all is inarizushi: fried tofu bags (aburaage) filled with sushi rice; however, you can negotiate their actual diet. Feed daily. Foxes get hungry.

Fox Spirits can be exorcised by knowledgeable shamans; however, gifted exorcists tend to be tainted by their very success. Extortion rackets are suspected: the exorcist who specializes in Fox Spirit removal may actually be in cahoots with the Fox Spirit, who may be his servant. No wonder he can exorcise the spirit: the Fox is his familiar who always does his bidding. Independent practitioners are particularly suspect. Exorcisms may also be successfully performed at Inari shrines. 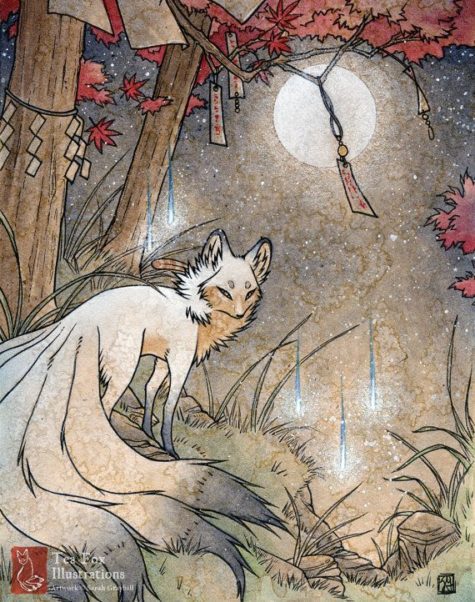 Fox Spirits are also attached to specific families and individuals, whom they may serve in exchange for care, feeding, protection, and veneration, or perhaps because they are ancestral spirits. Fox Spirits run in families. Families who are hereditary owners of foxes typically transmit this hereditary power through the female line.

Association with Fox Spirits may indicate vestigal memories of ancient fox-oriented shamanic religion. For centuries tremendous fear and social stigma have been attached to families rumored to be Fox Spirit owners. 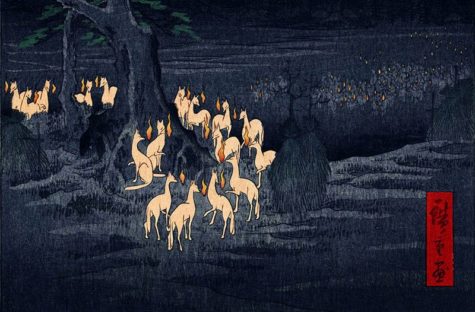 Kitsune no Yomeiri ~ The Fox Wedding

On a day when the sun shines bright and the rain falls, wise parents advise their children to play indoors. It isn’t that they are worried about them catching a cold. No, it is something more mysterious. For on such days the kitsune, the magical foxes of Japan, hold their wedding processions.

In Tokushima, the Kitsune no Yomeiri is a less happy occasion. It was called the Kitsune no Soshiki (Fox Funeral) and seeing one is considered an omen of death.

From Sakurai city in Ibaraki prefecture to Kashihara city in Nara prefecture, tales of Kitsune no Yomeiri appear all over Japan— with the sole exception of the northern island of Hokkaido. Most stories follow similar patterns with only slight variations. There are two phenomena referred to as Kitsune no Yomeiri—the bizarre weather called sunshowers where rain falls in broad daylight; and the procession of foxfire, called kitsune-bi, winding through the mountains late at night.

A description of Kitsune no Yomeiri comes from the book Echigo Naruse published during the Horeki period (1751-1764):

“On dark and quiet nights, in secret places, strings of lanterns or torches can be seen stretching out single file in an unbroken chain more than two miles long. It is a rare site, but an unmistakable one. It can be seen most often in Kanbara county, and it is said that on such night young foxes claim their mates.”

The procession of lights became associated with weddings as it mirrored Japanese wedding ceremonies at the time. Based on traditions established during the Muromachi period (1392–1573), weddings were held at night and the bride was escorted over to her new home by a lamplight parade. This type of ceremony—called the Konrei Gyoretsu (Wedding Procession) —lasted until the mid-Showa period when Western wedding ceremonies replaced traditional Japanese ceremonies.

Legends of the Kitsune no Yomeiri merged with existing stories of kitsune magic and bewitchment. People who tried to follow these foxfire lantern processions would find that they disappeared as soon as they got close—although on rare occasions traces of the ceremony were found. Shunjitsu Shrine in Saitama prefecture was said to be a popular place for fox weddings. Whenever a Kitsune no Yomeiri lit up the night, the mountain road leading to the shrine was covered with fox poop the following day.

In both Niigata and Nara prefectures, Kitsune no Yomeiri was thought to be a good omen for the harvest, with the more lanterns being seen the more fruitful the harvest. A year with no fox weddings made people dread the upcoming famine.

The foxes of Gifu prefecture didn’t just content themselves with lanterns. The foxfire procession was accompanied by the sound of cracking and blazing bamboo, although when examined the following day the forests appeared untouched. 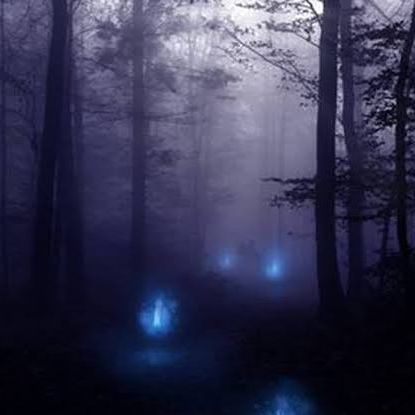 The procession of lamplights is not only a widespread phenomenon in Japan; it is worldwide. Japanese kitsune-bi is different from foxfire in Western legends, which comes from a phosphorescent fungus. It is more akin to the Will-o’-the-wisp, also known as ignis fatuus or “Fool’s Fire.”

The most common explanation is that these fires are the oxidation of the chemical phosphine caused by decaying organic matter, such as can be found in forests. Other suggestions are that they are a mere optical illusion caused by the setting sun. But there is no scientific evidence for either of these theories.

The foxfire procession kind of Kitsune no Yomeiri are rarely seen today. This is most likely due to the 1950’s deforestation of Japan’s native forests and replanting with fast-growing industrial cedar. Whatever magic of the forests that produced the foxfire lights, it is now gone, sacrificed to industry.

“When rain falls from a blue sky,
in the Hour of the Horse,
the Great Fox King takes his bride.”

Another strange natural phenomenon goes by the name of Kitsune no Yomeiri, and in the modern era is much better known. On days when the sun shines and it still rains—a weather condition called tenkiame in Japanese or sunshowers in English—foxes are once again thought to hold their wedding ceremonies.

How sunshowers became associated with fox weddings is vague. Some say that it has to do with mountains where foxes are mostly found. There are times when mountains are covered in rain, while the town below is clear. People said that the foxes summoned the rain with their magic to hide their wedding ceremony.

Others just think that because sunshowers are a mysterious occurrence, going against the natural pattern of clouds and rain, that people assumed a supernatural origin and associated it with foxes.

As always, there are regional variations. In agricultural regions the sunshower version of Kitsune no Yomeiri was a good omen, promising rain for the crops and many children for the any new brides lucky enough to be married on such a day. In Tokushima, sunshowers are known as Kitsuneame (fox rain) and not associated with weddings. In Kumamoto prefecture fox weddings are associated with rainbows, and in Aichi prefecture they are associated with hail. 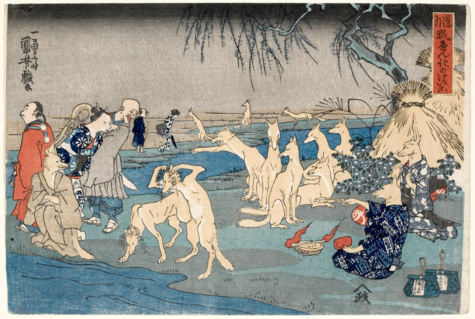 How to See a Fox Wedding

While most people go out of their way to avoid seeing strange phenomena (getting wrapped up in kitsune magic is rarely healthy in Japanese folklore) there are a few rituals for the brave and the curious.

In the Fukushima Prefecture, a bizarre ritual exists of wearing a suribachi mortar on your head and sticking the wooden pestle in your belt, then standing under a date tree. Of course, this only works on the 10th day of the 10th month of the Lunar calendar.

Aichi prefecture has a much easier method—just spit in a well and weave your fingers together. You are said to be able to view the Kitsune no Yomeiri though the gaps in your fingers.

But most stories advise against seeing a fox wedding—foxes are powerful in Japanese folklore, but dangerous. A wise person keeps well away. 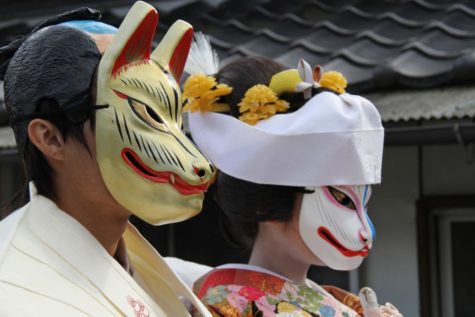 Kitsune no Yomeiri remains a popular aspect of Japanese culture and folklore. Many towns hold Kitsune no Yomeiri festivals re-creating the famous processions. Most of these festivals are modern—coming from the 1950s to as recently as the 1990s—and were started as tourist attractions to draw people into town. Local politicians and businesses participate in the festival, and sometimes the fox bride and groom are selected as a sort of “beauty pageant.”

Not all are modern tourist traps, however. The Yokaichi city, Mie prefecture Kitsune no Yomeiri procession to Suzakiha Mamiyashimei Shrine dates back to the Edo period, and is a ritual to drive out evil spirits and ask for blessings for the harvest.

The festival in Kudamatsu city, Yamaguchi prefecture, has also been held since ancient times, although it bears little relationship to popular images of the Kitsune no Yomeiri. It involves asking the blessing of a pair of white fox deities whose wedding ceremony is re-enacted every year on November 3rd. More about this festival can be found at The Pagan Calendar.

Promote Your Page Too
Bread Crumbs
A trail of bread crumbs just in case you lose your way exploring your higher power. Site News > The Powers That Be > What’s New > Weddings