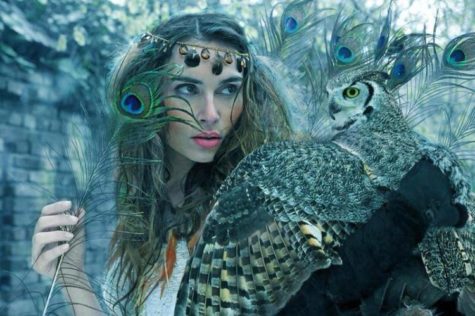 In the late twentieth century, Aradia emerged as an important Wiccan goddess. She is a major spiritual inspiration for modern Wiccans and practitioners of witchcraft. Rites and descriptions are found within her book and testament. Here’s a link to her story and teachings: The Story of Aradia.

Aradia has become an important figure in Wicca as well as some other forms of Neo-Paganism. Some Wiccan traditions use the name “Aradia” as one of the names of the Great Goddess, Moon Goddess or “Queen of the Witches”. Portions of Leland’s text influenced the Gardnerian Book of Shadows, especially the Charge of the Goddess.

Between 1950 and 1960, “Aradia” was probably the secret name of the Goddess in Gardnerian Craft. The Goddess Aradia is a central figure in Stregheria, an “ethnic Italian” form of Wicca introduced by Raven Grimassi in the 1980s.

The Goddess form of Aradia today is that of a nature Goddess, crowned with the crescent Moon of Her mother/other self-Diana. She is young and beautiful, but wise. Her consorts are Cernunnos, Herne or Pan. 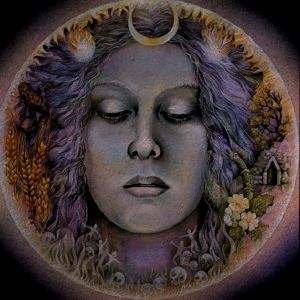 In the beginning was Diana, primordial Spirit of Darkness. She divided the world into complementary opposites: yin and yang, male and female, light and darkness. The light half evolved into her brother, Lucifer. Diana desired him, wishing to unite and merge, but Lucifer wanted light to remain completely distinct from darkness. Diana pursued him but he resisted.

Lucifer slept with his favorite cat. Diana switched places with her and so she seduced her brother, in the guise of a black cat. From this union, the world’s first witch was conceived: Aradia, Messiah of Witches.

Diana descended to Earth disguised as a mortal where Her knowledge and passion for witchcraft made Her so powerful that She became the Queen of the Witches. She became so well known that She was forced to shed Her human disguise and return to heaven. The Queen of the Witches had a duty to continue to teach witchcraft on earth so She delegated this task to Her daughter Aradia.

“Go to earth below
To be a teacher unto women and men
Who fain would study witchcraft.
Yet like Cain’s daughter thou shalt never be,
Nor like the race who have become at last
Wicked and infamous from suffering,
As are the Jews and wandering Zingari,
Who are all thieves and knaves; like unto them
Ye shall not be….

Aradia would be the first of the known witches in the entire world. Diana instructed Her in the arts of poisoning, binding and paralyzing so that She would be able to defend and protect Her followers from the tyranny and oppression of the Church.

Aradia was a Goddess who didn’t have any qualms at all about exacting retribution upon those who harmed her followers. When Aradia descended to earth, she became the first of all witches, and promised her students that:

“Ye shall all be freed from slavery,
And so ye shall be free in everything”.

The legend of Aradia may have originated in a dim memory of an actual woman who was a great teacher of magick and witchcraft and who was a defender of the poor. Like King Arthur or Jesus of Nasareth the myth figure can also become the deity. The Goddess form evolves and acquires its own independent validity and power.

That’s the first coming of Aradia the Messiah according to the mysterious grimoire, Aradia or The Gospel of the Witches. Aradia returned for a second coming too.

This Aradia was born in Volterra, Italy, on August 13, 1313, and stimulated a revival of Italian witchcraft and pre-Christian traditions long driven into hiding by the Church. She learned the Old Ways from her family and taught them to others. She was caught by the Inquisition and burned but not before leaving the manuscript that is allegedly the framework for the testament Aradia or the Gospel of Witches, published in 1899 by folklorist C G Leland.

No documentation regarding either Aradia exists prior to publication, but in 1508, Italian Inquisitor Bernardo Rategno noted that a rapid expansion of witchcraft had occurred one hundred fifty years earlier, corresponding in time with Aradia’s second coming.

The story of Diana as Creator of the World, Mother of Witchcraft, does not correspond with anything from classical mythology, although that in itself proves nothing. Many myths and deities are known from but one single source. This could be another instance of a lone survival of an ancient myth, or it could be an attempt to defame witches.

The name Lucifer (light bringer) predates Christianity and was a title given to various Roman deities, female and male. It was originally intended as benevolent, but during the medieval period when Aradia was allegedly written, Lucifer was exclusively identified with Satan, the proud handsome fallen angel. Inquisitors branded Diana as the bride of Lucifer in order to damn and defame her devotees.

The name Aradia resembles Herodias, among medieval Italy’s favorite witch-goddesses. Leland, for his part, thought Aradia was a distortion of Lilith, the real first woman, not the New Testament’s Herodias. Italian Jews who brought Lilith to Italy do identify her with black cats.

Current historians and folklorists still can’t prove or deny the story created by the book published more than a hundred years ago. Nonetheless, Sabina Magliocco, a specialist in Italian folklore, believes that Aradia’s legend is a compilation of many characters known from ancient times to the 19th century.

She suggests that Aradia must have been a supernatural creature related to Italian folklore. Magliocco identified Aradia with the legendary witch figure – who is probably a supernatural legend known in the Sardinian tradition as ”sa Rejusta”.

Another theory comes from Raven Grimassi, who created Stregheria – a neo-pagan tradition. He says that a woman known as Aradia di Toscano was a real person who lived in the 14th century and was a witch, or a powerful leader of a group of witches, who worshiped the goddess Diana. Grimassi supposed that the woman described by Leland was none other than a medieval witch who believed she was an ancient goddess’ daughter.

One more hypothesis comes from Mircea Eliade, a Roman historian of religion who lived between 1907 and 1986. Eliade suggested that the name Aradia comes from Arada and Irodiada – a folkloric name for the famous Queen of the Fairies. In Romanian culture, she was related to Diana and was a patron for a group of dancers who existed until the end of the 19th century (although it’s possible that they secretly continue their work even now.)

2 Responses to Aradia ~ Messiah of Witches