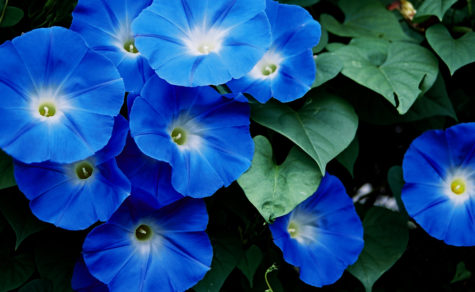 With it’s lovely flowers, heart shaped leaves, and clinging vine, the morning glory plant is definitely something to consider when constructing a love and/or relationship spell.

In the language of flowers, the morning glory represents affection. As a gift, these beautiful flowers can be given in nearly any way imaginable – from the traditional bouquets to pressed or dried single blossoms. When given as an arrangement, you might also take color into account. That is to say, your message may generally express a feeling of affection, but that affection might be tinted with the fiery passion of a red blossom, the calm of a blue one, or the spirituality of a purple one.

In some cultures the ipomoea aquatica variety of morning glory is considered a delightful green that can be used in a number of dishes. They are frequently placed in salads, stir fries, mixed with noodles, or simply used as a garnish.

Although morning glory seeds are considered to be mildly toxic and have side effects such as hallucinations, nausea and drowsiness, many people still consider them to have powerful medicinal effects. The Aztec narcotic ololiuhqui, derived from a wild morning glory, was spread on surface of affected parts for gout, and the seeds were eaten by the Aztecs to bring visions. Their molecular structure resembles that of LSD. The seeds are sold in nurseries for planting.

In China, the morning glory was once considered a highly effective laxative; to the native Indians of Mexico, both ipomoea tricolor and turbina corymbosa were frequently used in rituals and medicine for their supposed soothing properties.

In folk medicine, the boiled leaves of certain species are used as a diuretic; the seeds are chewed to aid in soothing stomach pains, while the whole plant may be cooked and turned into a topical ointment to treat rheumatoid arthritis. Morning glory tea was said to be good for dysentery and diarrhea.

According to Scott Cunningham (Encyclopedia of Magical Herbs) the morning glory or bindweed (Ipomoea spp) are masculine plants, classified as being under the influence of the planet Saturn; the element water, and with powers over happiness and peace.

Cunningham indicates that one can “Place the seeds beneath the pillow to stop all nightmares.” And also that grown in the garden, blue morning glories bring peace and happiness. The root of the morning glory, according to Cunningham, may be used as a substitute for High John the Conqueror root.