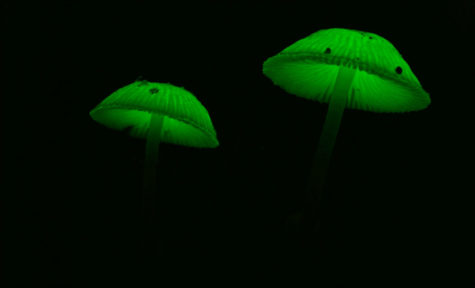 If you ever find yourself walking through a damp, dark woods at night without any flashlight, you might just witness something amazing. If you’re lucky, in the undergrowth concentrated on and around rotting logs, you’ll notice a green or blue glow. It’s foxfire, and it’s beautiful. Often foxfire looks as if the bark of a fallen log or old tree branch is glowing at night. It’s not the wood but rather what’s feeding on it that’s creating the light. With some species, it’s the mushroom cap itself that glows, in other species only the underside of the cap is luminescent.

For centuries this was called fairy fire or will-o-the-wisp and was attributed to something mystical. The oldest recorded foxfire sighting was by Aristotle in 382 BC, he thought it was a cold fire burning on the logs. The actual cause of foxfire was only discovered in 1823 when glowing beams in mine shafts were investigated. 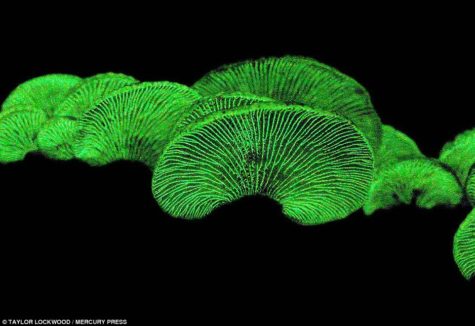 Foxfire in the wild is magickal all by itself, and can indicate a message from the underworld, or a warning to be careful where you are going. It not easy to come by, and if you are lucky enough to have a place in the wild where you can see it, be very protective of the area.

If you acquire some foxfire, use it to set a magickal mood, to bring the energy of the fairy realm to a dark moon ritual, or to make contact with Fox Spirits, ghosts, and other creatures of the night.

The compound in the fungi that creates the light is called Luciferin (meaning light bringer), which brings to mind thoughts of Lucifer and the underworld. If you are involved in dark magick, foxfire would definitely be an ingredient that could be added to rituals and spells, particularly for magickal workings designed to lead someone astray. 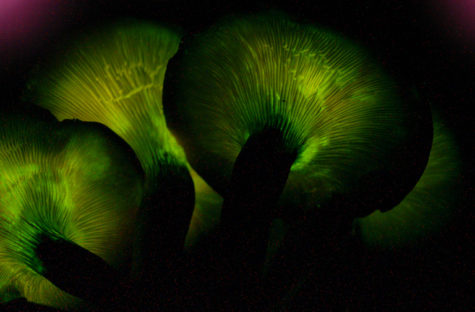 How can you experience foxfire for yourself?

The best way to see foxfire is in old, moist oak woods where plenty of big dead limbs and old stumps litter the ground. Foxfire can be seen in the spring as the forest floor warms. The light is so dim, many people never notice it. To see foxfire, pick a night with no moon. Keep away from areas with artificial lights and do not use a flashlight. Your eyes must be well adjusted to the dark.

The aim is to be out on a dark night, with a mild temperature and to walk in woods that are damp but not wet. Think of foxfire as Goldilocks — not too hot, not too cold, not too wet, not too dry. When conditions are just right, and you’re in just the right spot with your eyes adjusted to the dark, the forest around you will glow — and it’s magical.

According to Carol Probets, a nature guide from the Blue Mountains of Australia, “If you learn to recognize it in the daytime, it’s much easier to find it in the nighttime rather than wandering around in the dark.”

Amazon sells bioluminescent fungi kits for those who want to grow their own. The Glow in the Dark Mushroom Habitat Kit features Panellus Stipticus (Bitter Oyster) spores along with whatever is needed to get them growing. Or you could explore all the other glow in the dark fungi available for sale online. 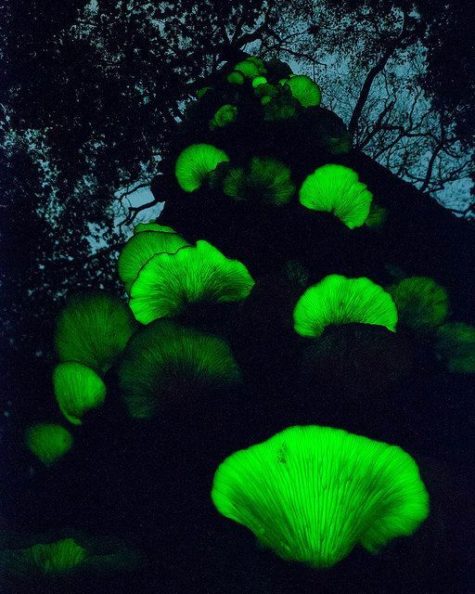 A couple of years ago, I went out at night to sit with a clump of jack o’lanterns around a stump in my neighbor’s lawn. It took about 10 minutes for my eyes to be able to make out the glow. During that time, I counted shooting stars, meditated on the answer to the ultimate question (42), and listened to night sounds. Among those sounds was a persistent shushing, coming from all around me. When I had basked long enough in the glow and switched on my flashlight, I found I was surrounded by hungry giant slugs, slithering softly through the grass as they homed in on the Jack O’Lanterns, which apparently don’t upset slug tummies at all.

I have often sent students home with hunks of wood bearing this fungus. If you are prone to wakefulness in the middle of the night, as I am lately, P. stipticus is a great thing to have on your bedside table. Waking up and finding its glow on your nightstand is a sure way to erase the day’s worries, dispel night terrors, and forget that strange clunking in the basement. You’ll need a fresh northeastern specimen–nice pliable fruiting bodies. It’s handy to know that fairly crispy, dry specimens will revive well if you wet them. I run them under the kitchen tap, and wrap them in wet paper towel. When I go to bed, I peel back the paper towel, and leave their hunk of wood sitting damply in a dish until I awake and find them glowing steadfastly beside me.

While most fungi don’t possess this ability, there are some 71 known species of bioluminescent mushrooms contained within three groups— the Omphalotus, Armillaria, and Mycenoid lineages. Their degrees of light intensity differ; while many of the Australian species are very luminous, North American species tend to emit less light and require adjustment to the dark before they can be seen. Some don’t glow brightly enough for their light to be visible to the human eye – rather, the glowing effect shows up after a long exposure when taking a photograph. 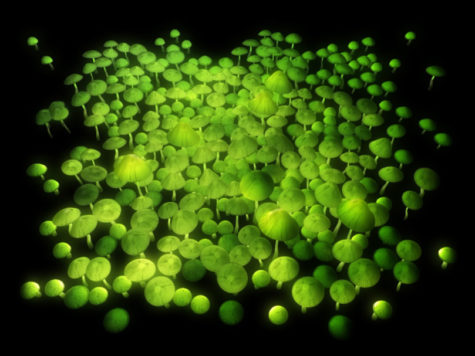 Here is a short list of a few of the more well known bioluminescent mushrooms, along with a little bit of information about each one:

In Scandinavia,  mycelia-infested bark was used as a sort of night light during the long winter nights. The practical uses of these mushrooms extended to other areas of the globe as well; in the late 17th Century in Herbarium Amboiense, Dutch physician G.E. Rumph commented on how Indonesian natives used bioluminescent mushrooms as primitive flashlights.