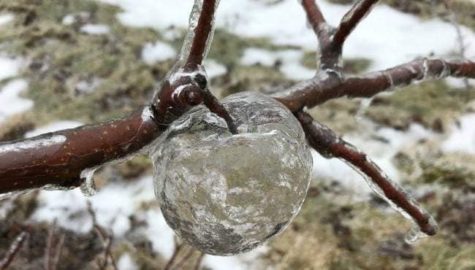 A ghost apple is a very rare phenomenon that happens when freezing rain coats old and rotting apples and creates a solid icy shell around them. Because apples have a lower freezing point than water, the apples that are inside the thick icy shell melt before their icy shell. When gently shaken, these mushy apples slip out of their icy shell and leave the “ghost.”

For this to happen, it requires extreme changes in temperature, freezing rain, an abrupt warm up. All of which have to happen in just the right amounts and for the optimum amounts of time.

Because they are so rare, and so interesting, it follows that a Ghost Apple would make for a very effective magickal ingredient. If you happen to be lucky enough to find a ghost apple, or if you are able to figure out how to make one, here are some ideas for ways to use them in magick. 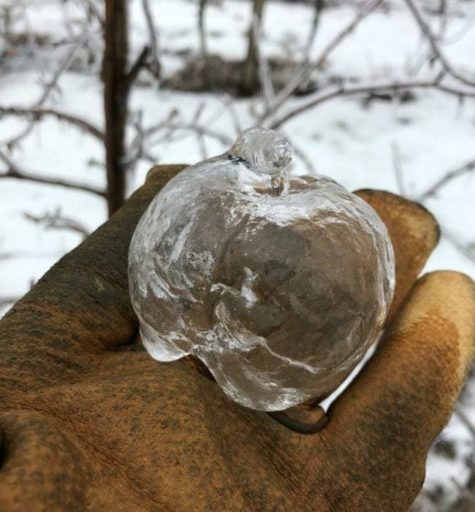 Sometimes, that icy shell might represent an attempt to protect and shield a relationship that is unhealthy and unhappy. The icy shell might also represent walls that you have created around inner hurts and trauma. Walls that keep the world out, and may indicate a feeling of being frozen.

Often when a difficult or toxic relationship is ended, it leaves you with an inability to open up, or allow yourself to feel vulnerable again.

A spell for using a Ghost Apple to open your heart to love again can be found in the Book of Shadows. If you would like to try your hand at making your own Ghost Apples, I would suggest the following method: 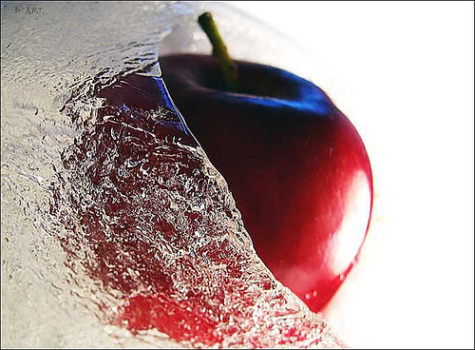 You will need the following:

To speed up the process, bake the apple until it is soft. Allow the apple to cool to room temperature. Fill the container about halfway with water, and then place the cooled apple into the container upside down. The bottom of the apple should be just slightly above the level of the water.

When the water is frozen solid, remove it from the container and suspend it, upside down until the apple is thawed enough to slip out of the icy casing. You now have a home made version of a Ghost Apple.

For best results, put the power of intention into the process. Visualize the apple as the person or relationship slowly going bad while it is baking. The water in the container represents what it is that feels frozen. As the apple slips out of the ice, see it as the toxic person or situation slipping away.

You are now ready to do some magick to release yourself from the icy residue, which can be as simple as allowing it to melt away.