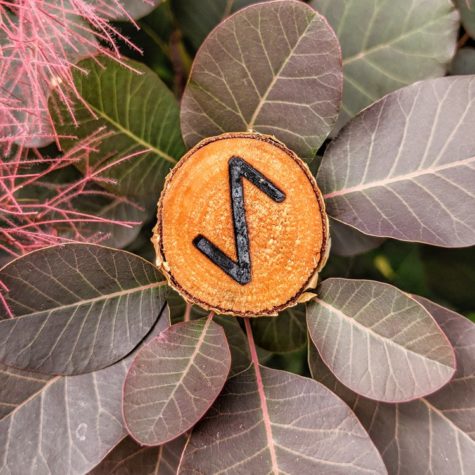 Protection of oneself and one’s rights. When things are out of kilter this rune can help this rune can help set them back in line. However, if it is the runecaster who is out of whack, things suffer for it. This rune can thus be used in conjunction with other runes to keep the magic of the whole within reasonable bounds. It forms a kind of feedback mechanism within talismans and rune magic.

Eihwaz symbolizes the yew tree and is a very powerful rune of banishing and protection. Protection. Increase in power. Removal of obstacles.

Initiation into the wisdom of the World-Tree (the axis of the multiverse). Realization of the death/life mystery and liberation from the fear of death. Development of spiritual endurance and hard will. Spiritual creativity and vision. Protection from detrimental forces. General increase in personal power. Communication between levels of reality. Memories of former existences in the the ancestral stream.

Symbol of Yggdrasil
the yew is strong
and holds many worlds within its branches.
It offers much support
to those who grow it.

Stand with your arms outstretched in front of you at a downward angle, palms facing downward. Balancing on your right leg, bring your left leg up, bent at the knee as shown in the above image.